Let's say I take my multimeter and measure the voltage across the poles on my battery, I get some reading X volts. I then put a resistor between one terminal and the adjacent probe, this resistor has resistance Y ohms. 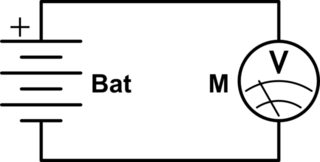 What will the new voltage reading be?

An ideal voltmeter (which does not exist in real life) has infinite resistance and no current flows when a measurement is made. In that case there would be no current flow in the series resistor, so no voltage drop, so the metter would still read full battery voltage.

A real voltmeter has finite resistance. A cheap meter may have a 1 megohm resistance, maybe even 100 kohm - but there is no good reason for a digital meter to be under 1 megohm. When connected current will flow in the meter. This will have minimal effect on the battery voltage, but the current will cause voltage drop in the series resistor and the meter will read low by this amount. As the same current flows in meter and in the series R and as V= I x R , the voltages across resistor and meter will be in proportion to their resistances.
Say Rtotal = Rmeter + Rseries.
All the voltage will drop across Rtotal (of course).
So the proportion across the resistor will be Vbattery x Rseries/Rotal.
And the proportion across the meter will be Vbattery x Rmeter/Rotal.

So, in most cases, things like contact resistance and wiring resistance will have minimal effects on voltage measurements as long as there are no other currents flowing to affect the reading.

X volts. The resistor doesn't have any current through it since there is no return path (assuming you have a meter with high resistance, which good ones do).

Not the answer you're looking for? Browse other questions tagged resistors multimeter or ask your own question.

48
What is the usage of Zero Ohm & MiliOhm Resistor?
2
Thermal noise (Johnson noise)
5
9V battery and resistor are connected in series - the voltage across the resistor is < 9V. Why?
1
Measure inductor coil's resistance using multimeter
0
When measuring a resistance using a multimeter it is a few percent out. Why?
31
Multimeter exploded during ACV measurment - What did I do wrong?
1
Resistance measurement across reversed batteries using multimeter
3
Effects of using voltmeter w/ 20 kΩ impedance across 35 kΩ resistor?
2
Measuring a small resistance, ~0.001 ohm
0
2 Possible Currents and Vdrops from same Resistor: Which Will it Be? [Beginner]