Digital Rotary Encoder -- Broken? Or am I misunderstanding how it works?

I apologize if this seems like a fundamental question, but I feel like I'm missing a fundamental understanding about digital rotary encoders, because none of my basic encoders are working as expected.

These are the encoders I'm working with. Link to Encoders

Based on my fundamental understanding of an encoder, it's basically like a double switch that are 1/4 cycle out of phase. At times, 1, 2, or 0 of the encoder pins will be connected to the base pin.

Given this, it seems like the resistance between pins should be either 0 or INF? Correct? Depending on the current position of the encoder?

If the multi-meter was showing 0 resistance (closed switch), and if I move the encoder two clicks, then it should show INF resistance from pin 1 and base, correct?

I'm losing my hair becuase I have several encoders all acting the same way....always showing INF resistance between pins ALL THE TIME.

NOTE: I'm currently hooked up the the pins on the side with 3 pins. Pin 1 and 3 are encoder pins and Pin 2 is the base pin.

I got a response from another forum that mentioned that in a single click the pins complete the entire cycle (A HIGH, B HIGH, A LOW, B LOW). Is this true? Does anyone have a video or article that says this?

I may have found a datasheet for a similar device. Not the same one. But perhaps similar enough that it gets the point across. See Alpha's 318-ENC130175F-12PS, for example. From this datasheet, you find the following diagram: 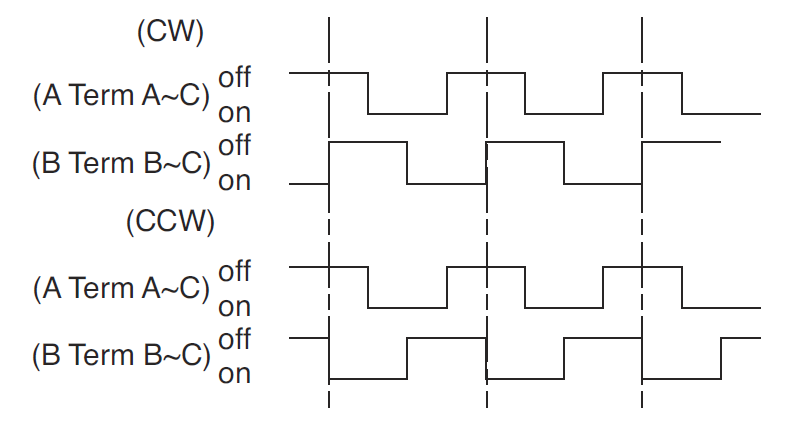 Note where the detent lines (dashed and vertical) appear. It's not difficult to see how just a tiny alignment difference might place the detent exactly where both A and B are "off." And both "off" at every detent. So, if you were twiddling the knobs and then doing a measurement, you might easily find that both A and B appear off every time you try. But the rotary encoder would still be just fine, regardless.

The Amazon link you provided has a question and answer which says that your encoders do have detents. Without an actual datasheet I can't say for sure, as it is possible that your rotary encoder has detents in between the locations shown in the picture above, but it would not surprise me that your rotary encoders operate much like the one I where I did find a datasheet. Especially considering how they are often used by Arduino software, with A as a clock and B as data (or visa-versa.) If so, your experiences may not be so surprising after all.

Amazon, like eBay, isn't the best place to get parts with proper documentation, as you have noticed. However it does say "with push-button", which, if true, means there's at least 2 pins that connect if, and only if, the shaft is pushed in. Leaves 3 pins, so that means there's one centre pin, which connects to an A and a B pin in shifted phase when you rotate.

Most common layout I know of with that type is "centre pin" is the middle one in the row fo three and B and A are on the other side. The pins surrounding the mid-pin actually being the push button.

However, it may be entirely different. This would normally be listed in the Datasheet, which, as you have noticed when buying from "random sources" is a point of trouble more often than not.
Update: As it turns out from James' comment, the pins for the button are the two separate ones, but I was right on the middle pin.

When starting out with a new subject it's often wiser to buy only after you verify that there's an actual datasheet available, rather than save a dollar and then spend days not quite figuring it out. There's plenty sources in the places that Amazon caters to that make an attempt at supplying datasheets. While I'm not a super fan, sites like Sparkfun and Adafruit, for example, often have something of a datasheet for their parts. So do Digikey, Mouser and Farnell, of course, usually from the manufacturer, but you may need special accounts for those, depending on your location.

the resistance between pins should be either 0 or INF?

or anywhere in between, depending on which pins you are talking about.

If the multi-meter was showing 0 resistance (closed switch), and if I move the encoder two clicks, then it should show INF resistance from pin 1 and base, correct?

yes/no, depending on how good your meter is in registering short closes and how fast you are rotating it. the contacts will close momentarily.

Not the answer you're looking for? Browse other questions tagged basic encoder hobbyist or ask your own question.