I am using an NE5532 as a voltage follower/buffer in an audio circuit and am having some noise issues. I’ve simplified the circuit to isolate the issue. The audio input signal comes in through an audio transformer to the +IN on the amp. The amp output is currently going directly into a commercial mixer for testing.

With the mixer gain and volume turned up and no sound signal, rather than quiet white noise/background static I’m getting a relatively loud/fast ticking/flapping sound … sounds something like shuffling cards, but more of a ticking. With an input signal, it’s loud enough to interfere with the music. There are also some blips of loud static every second or so. For testing I replaced the op amp with an LM411 FET amp, the noise was mostly gone, except for the ticking being very very faint at full volume. I have tried all different combinations of grounding, and transformer isolating outputs, nothing helps, it seems to be an op amp issue and the noise is in the signal itself.

I’ve tried scoping the output, and can’t distinguish the ticking noise and blips from noise measuring from only the original source.

Any idea what is causing this and how to fix it?

Another thing: This amp is used as a buffer prior to output with line level signals up to 2Vrms. According to the datasheet, excessive current is drawn at a differential input of 0.6V due to the input transistors. Should I be modifying my circuit with input resistors or something, or should this amp only be used with small input signals? 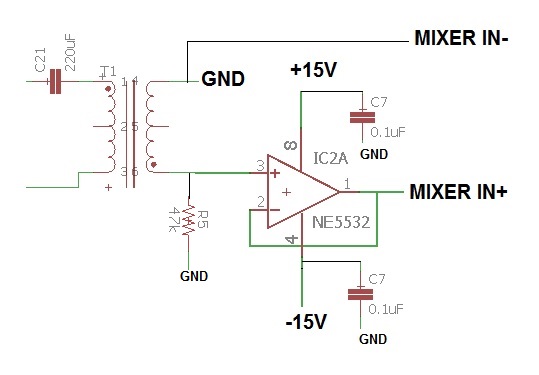 A few things: The final circuit is much more complex, this is basically what I've simplified it to just for isolating the noise issue. The final circuit is single-ended +12VDC, with opamp biased to +6V, and power supply is +15VDC switcher with heavy filtering and +12V linear regulator. Regardless of how I power the circuit, whether +15V switcher with filtering or a linear 12V bench supply, I get exactly the same noise as described. Input to mixer is balanced.

Update: Here are the additional tests I've completed trying to isolate this noise problem. All have been unsuccessful so far: 1) I was able to measure from 3-12mVAC between completely unused traces even with no power on the breadboard and discovered that this was causing some hum, so I deadbugged the circuit. Same result. 2) I've tried adding an LC filter w/ 500kHz cutoff after the opamp to eliminate RF interference, same result. 3) I've tried a different brand mixer after discovering the jack shields on the first were not chassis grounded. The original used a linear supply, this one a switchmode supply. No change either way. 4) After measuring 45VAC to ground on the new mixer chassis, I've tried variations of earth grounding the mixer chassis through the bench supply. This eliminated the massive hum I'd get without doing it, but the opamp noise is still there. 5) I've tried both unbalanced and balanced inputs, no change. 6) I've tried multiple variations of different cables, plugs and adapters, headphones and shielding the cables. No change.

The only thing I can think of left is that it's something with the opamp itself. As originally mentioned, an LM411 reduced the noise significantly, although it was still there. I'm attaching an overview of the system setup, I apologize for the poor quality. The drawing is mainly to isolate any potential ground loops, so the internals of the devices may not be entirely accurate, I only verified where GND and COM were connected. Is there a way to attach an audio file to this post? Maybe someone will recognize the noise. Not experienced with the phenomenon, but I think it may be motorboating.

Thanks so far for the troubleshooting input, any other comments are greatly appreciated. 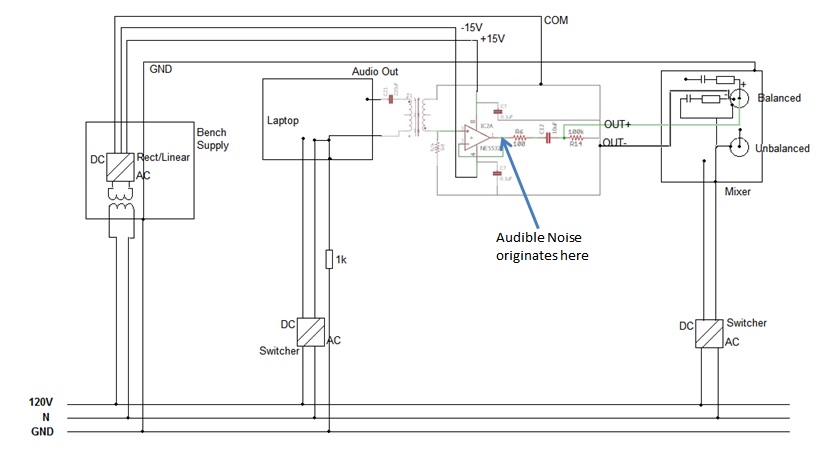 So, I was finally able to solve the motorboat problem by placing an LRC filter with a 50kHz cutoff frequency directly at the output of the transformer. The transformer has a self-resonance frequency at around 280kHz but amplitude starts growing around 90kHz, not sure if this is the cause specifically but killing that resonance and whatever else was making its way into the opamp seems to have eliminated the noise. Thanks everyone for their input.

You say in a comment that no noise is exhibited if the transformer is connected directly to the mixer's balanced input.

However, I suspect that the intended role of this transformer is as a "balun": converting unbalanced to balanced.

The mixer, being balanced, is a three-terminal input. If the transformer's secondary is connected so that the centre tap goes to the mixer's GND, and the other two ends of the coil to the + and - inputs, then that is a very different topology from the single-ended scheme you have going with the op-amp.

In the configuration shown, the transformer's coil is a single ended input source. I would expect its windings to pick up EMI which gets amplified. The mixer's balanced input is not being used as a balanced input. In the balun configuration, noise from the transformer is suppressed because it is split into two coils of identical number of windings, whose noise cancels out by the opposite polarity inputs of same impedance.

One way to proceed is to ditch the transformer and implement the unbalanced-to-balanced conversion with op-amps, perhaps with a circuit like this one.

Implied in the circuit is an end-to-end ground connection.

If you want the isolation of the transformer (no end-to-end galvanic connection), you can work it into a different two-op-amp circuit. In a nutshell: extend the + and - inputs of the mixer with a pair of identical pre-amplifiers, each implemented by an op-amp. (This preserves the property of the balanced inputs being identical in impedance.) So now you effectively have a new mixer input which is still balanced but whose balanced inputs have more favorable impedance characteristics and level for your laptop's line out thanks to the two active buffering stages. In front of these stages, you engage the balun transformer in the usual way.

In the absence of a schematic, I would speculate that you are getting noise coupled into the circuit from your power supply. Try operating it from a battery to see if the problem goes away.

Failing that, short the input of the transformer and move the circuit away from all other electronics. If that eliminates the noise, undo the changes one step at a time to discover the source of the noise.

Your transformer secondary is 600 ohms. You should have a 600 ohm resistor across it to properly terminate it since the op amp input impedance is very high. Remove the 47k resistor. I would include a decoupling capacitor in series with the output of the op amp to ensure no DC offset is passed to the mixer. Make sure you have phantom power turned off on that mixer input.

Not the answer you're looking for? Browse other questions tagged operational-amplifier audio noise or ask your own question.