I'm trying to design a power supply for 6 IN-8 Nixie Tubes (driven individually, not multiplexed). Each tube has a current draw of 2.5-4.5mA, so they pull around 30mA(max) total. The input voltages is 12V and the output voltage should be 180V. Switching frequency should be around 100kHz (10uS for each cycle).

These calculations lead me to a series of questions:

Schematic edit (where the switch should function like an ideal mosfet):

This is a broad-brush explanation how to get to the inductance required in a discontinuous boost converter.

Try and think of things in terms of power (as per my answer to your linked question). Your output power is 180 volts x 30 mA = 5.4 watts so, if you transfer energy 100,000 times per second then the energy transfer in one cycle is 54 uJ.

Knowing that you need to store energy in the first half of the switching cycle and release it in the second half of the cycle you can use the inductor energy formula: -

This boils down to doing a bit of algebra to find L: -

I found the inductance to be around 400uH

You have to use the correct approach.

If you work out the current charged into and discharged from the inductor using my approximate approach the peak current in the inductor is 1.818 amps and this is also the peak to peak ripple current because of discontinuous operation.

Ripple current is what the inductor sees - it doesn't actually flow into the load because most of it is soaked-up in the output capacitor. The load will draw what current it needs from the 180 volts but the trick is keeping the output voltage stable because: -

To regulate voltage you have to have a control loop around the basic power regulator to keep the mark-space ratio correct so that voltage is regulated by controlling power.

Is it typical for ripple current to be larger (for an average load of 30mA) in a boost converter operating in CCM or DCM?

My simplified example above is for DCM and this will have a peak-to-peak ripple current that bears little relationship with load current.

In CCM, the inductor is always conducting and this means the peak-to-peak ripple current can be much smaller; the energy in the inductor isn't depleted to zero therefore the energy transfer per cycle is based around: -

In other words, if Imax is high then Imin need only be a little bit smaller to get the same energy per cycle (compared to DCM).

I decided to do a quick simulation to see how things panned out against my formulas: - 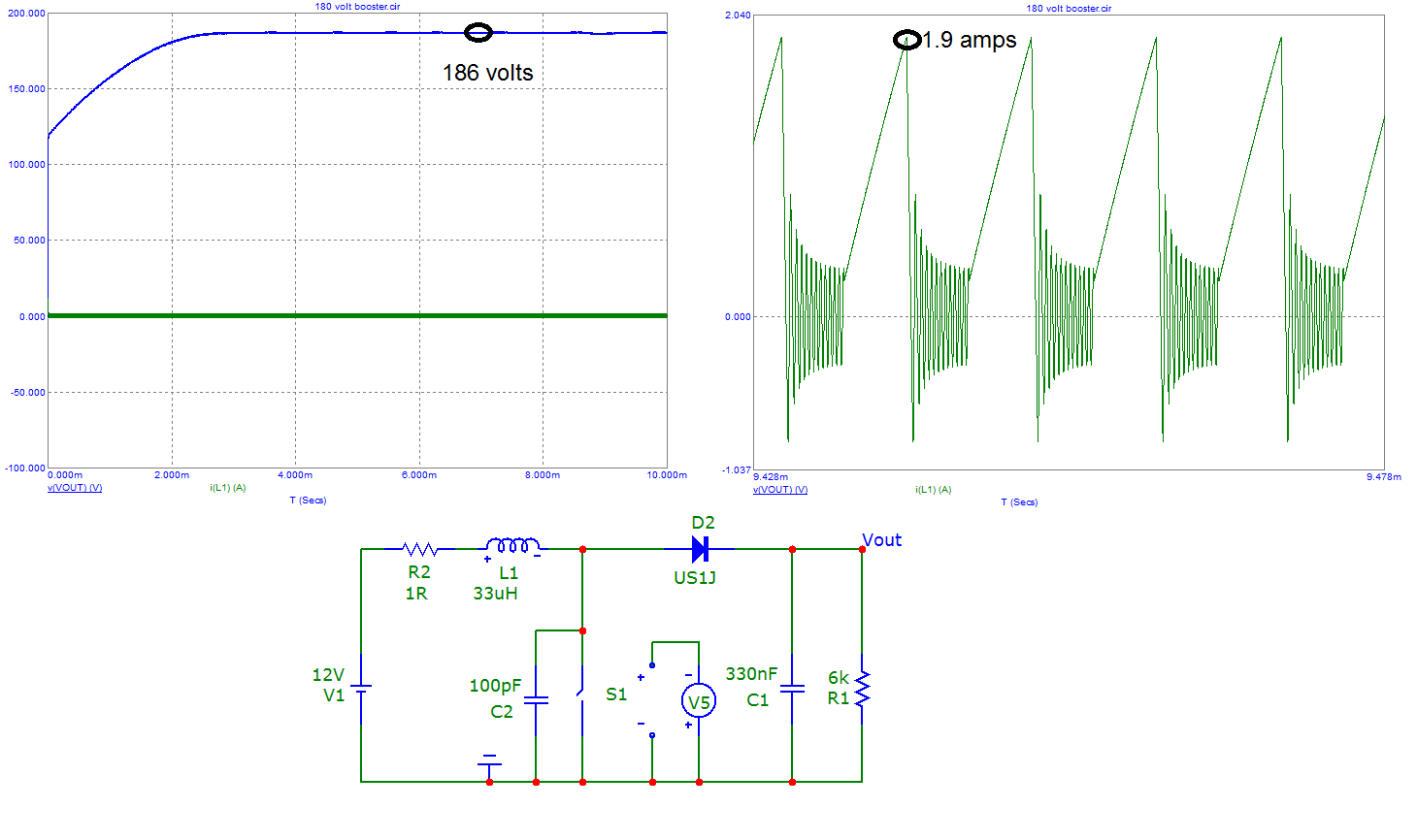 For 100 kHz switching at 50:50 duty I got a stable peak voltage of 186 volts with a peak inductor current of 1.9 amps with a load of 6 kohm. The output capacitor is only 330 nF just so that the output would charge up quicker in the sim. Inductor is as calculated - 33 uH.

Remember - this is a fixed load scenario - to make a booster with a regulated output you need an overall control system that tweaks the duty cycle as output load and input voltage varies. There is no such thing as a working simplified boost circuit with good voltage regulation.

The inductor current builds up during the switch's ON time. During this time the output capacitors hold the voltage up.

During the OFF time the inductor supplies current to the output capacitors replenishing the charge lost during the off time.

The output voltage should only change a little during this time. This change is called output voltage ripple. Depending on your design specs it could be 10s or 100s of mV.

The load will draw what it needs from the output, which is relatively constant. If the output voltage ripple is a problem then you can add capacitance or change the switching frequency or inductor value to get smaller ripple.

Not the answer you're looking for? Browse other questions tagged boost nixie ripple-current or ask your own question.

1
How to design a boost converter? And how to specify the inductor and capacitor values?