What exactly happens to the signals hitting a common mode choke?

I'm trying to better understand the principles behind the common mode choke. I made a few drawings to clarify.

Differential currents (driven by differential voltages) create equal but opposite magnetic fields B in the inductor core:

These magnetic fields cancel each other out, so the net flux in the core is zero. As such, these differential currents don't "feel" any impedance.

In contrast, common mode currents generate equal and additive magnetic fields in the core. That's why they "feel" a high impedance, and cannot get through (or getting through means they are highly attenuated).

But what exactly happens? I have several theories, which I will describe below.

My first thought would be that the common mode signal hits the choke and creates a magnetic flux inside. By doing this, lots of energy is lost (hysteresis and perhaps other effects) as heat. Only a small part gets through:

What kind of common mode choke would behave in this particular way? "Burning up" the voltage spike seems a very desirable effect to me.

Perhaps the voltage spike doesn't really get the chance to build up much magnetic flux in the core, or maybe the core is simply not "lossy" enough. The voltage spike bounces off the core and turns back. Only small part gets through:

I've got a few questions for you:

Adding to Andy's answer, no need to repeat what he wrote.

From what you write, I think your problem is more about intuitively understanding how the choke works. Consider an inductor: 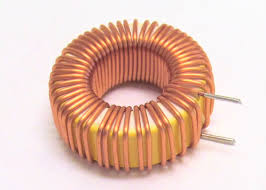 This inductor only has one wire. Current flowing through creates a magnetic flux which is picked up by the coil itself and creates a voltage which opposes the change of current. I suppose you know about that.

Now, split the wire lengthwise. You now have the same inductor, but with two wires wound in the same direction: 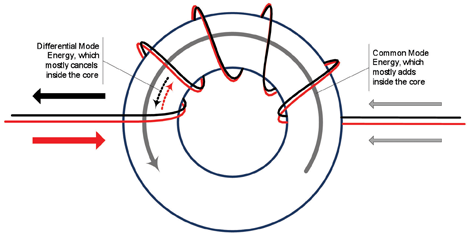 Common mode current flows through these wires in the same direction. Thus, it does not matter if you have one wire carrying current I, or two wires each carrying I/2.

(If both wires are connected like on Andy's first picture, then the result is the same as having one wire).

My first thought would be that the common mode signal hits the choke and creates a magnetic flux inside. By doing this, lots of energy is lost (hysteresis and perhaps other effects) as heat. Only a small part gets through

So, this is not how it works. It is simply an inductor which does not act on differential signals, only on common mode ones. It adds common mode impedance due to its inductance.

But how does it remove noise?

Simple. It's an inductor, so it will impede the flow of high-frequency common mode current, simply by adding impedance.

Here, the two AC sources "Vhc1" and "Vhc2" have the same value, so they add common mode voltage noise to "LINE1" and "LINE2".

This noise voltage will result in a current through the choke, then the equipment on the right, and this current will either return through an explicit ground (if both pieces of gear are grounded) or through whatever means it can find (parasitic capacitance through the air, or other cables connected to other equipment).

HF common mode current flowing through cables turns them into antennas, which is a bad idea.

The choke adds impedance on the circuit, thus reducing the current. Simple as that.

In the above pic, the choke on the left adds common mode impedance to the line, and the caps short the remaining common mode noise to earth. This is basically a voltage divider, or a LC lowpass filter, except it handles two wires instead of one.

Think "voltage divider". The choke increases the impedance of the noise source, which allows the caps to have a better filtering effect.

The way the wires are wound can have various effects. For best common mode filtering, twist the wires together (or coil a whole cable around the magnetic core). The chokes you show have some distance between the two wires, so common mode filtering efficiency will be a bit less. However, insulation between the two wires is much better, and this winding also adds differential mode inductance in each wire, which makes the component perform two roles.

More than two wires can be used. In fact, you can thread a whole cable through a ferrite core (look for a USB cable with one of these on your computer):

The graph tells you the impedance added to your cable in common mode.

Also, ferrite chokes are lossy. This means the material is designed to be a rather crappy transformer, with low efficiency at high frequency. It has high hysteresis. This means it turns HF magnetic fields into heat. So above a certain frequency, the inductor stops being inductive, and behaves more like a resistor.

If you put the choke on a cable, the fact it is lossy is very useful, as it kills the resonances which might otherwise turn the cable into an efficient antenna.

Check the impedance of a ferrite bead. This one isn't a common mode choke, but the interesting properties are in the ferrite material itself. If it was bifilar wound, the common mode impedance would have the same characteristics. 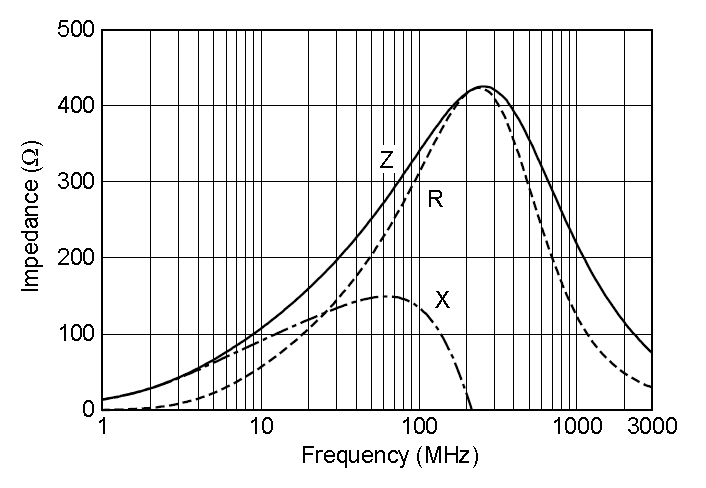 The portion marked "X" is inductive impedance. And the portion marked "R" is resistance. This part would suck as an inductor, it would have very low Q, lots of losses, no way to make a tuned LC tank circuit with that. However the losses are great stuff when you want to turn HF noise into heat.

If it's specified as "EMI suppression" or "ferrite bead" or "choke" and not as an inductor, you'll get lossy materials. Then you have to check the impedance curve to make sure they'll filter the frequencies you want.

Since the higher the inductance, the higher the common mode signal attenuation, the goal is to have higher inductance. This leads to designs that aim at avoiding core saturation and core losses, hence, even taking into accounts non-linearity from the ferromagnetic core, an ordinary, two-winding, common more choke presents an essentially inductive impedance to the common mode signal.

Therefore very little power is dissipated inside the choke, hence the common mode signal is essentially "reflected back" from where it came from (theory #2 of yours).

See this relevant document from ST:

In particular these excerpts (emphasis mine): 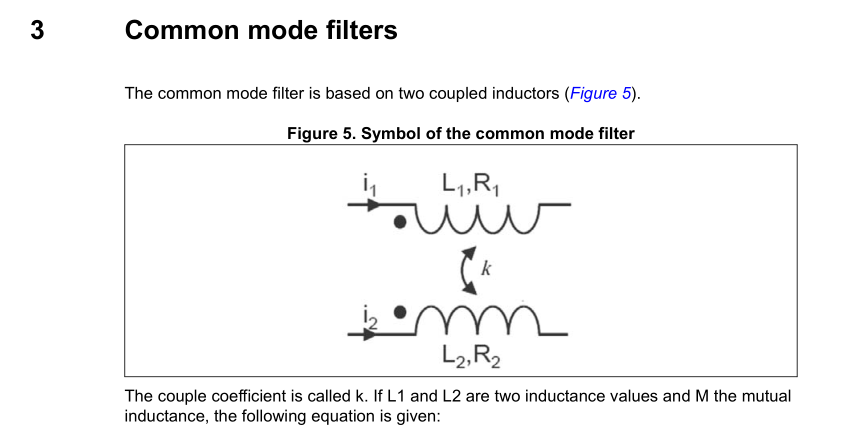 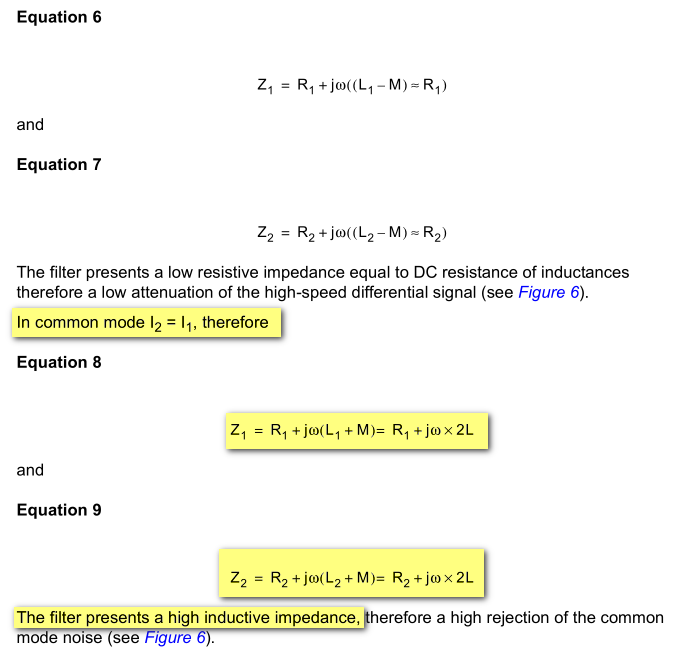 Just to be explicit: the fact that an inductive impedance implies reflection toward the source depends on the conservation of energy principle. Since there is essentially no resistive component that can account for the common mode signal energy to be dissipated (converted into heat), that energy must go somewhere else: it will be (temporarily) stored in the magnetic field that builds-up in the choke and reflected back from where it came.

However, a real CM choke will have a more complex behavior, primarily because of parasitic capacitance, and show a resonance peak in its impedance magnitude, as shown here by the blue curve (from the same document linked above):

Below is a picture that should help. A single input and output is shown that demonstrates the different impedances you get when you reverse the direction of one of the currents.

The first scenario is for a common mode current that we would seek to block: - 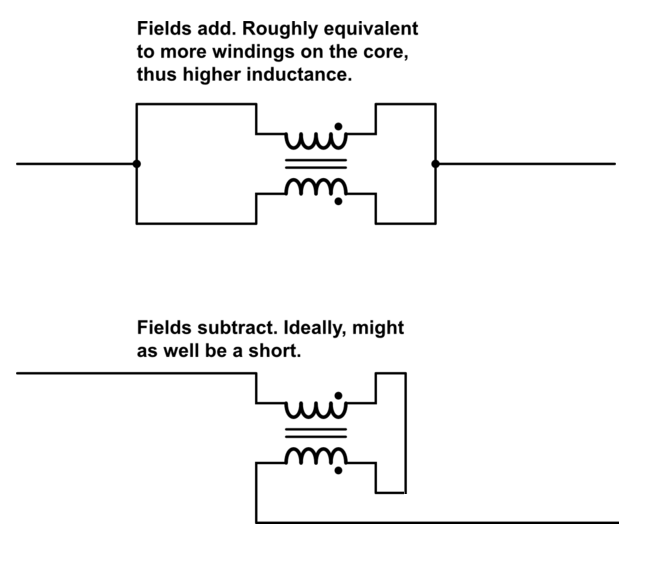 Here is a sim that shows how the opposing electro magnetic flux in the choke creates a high current resistance or impedance. 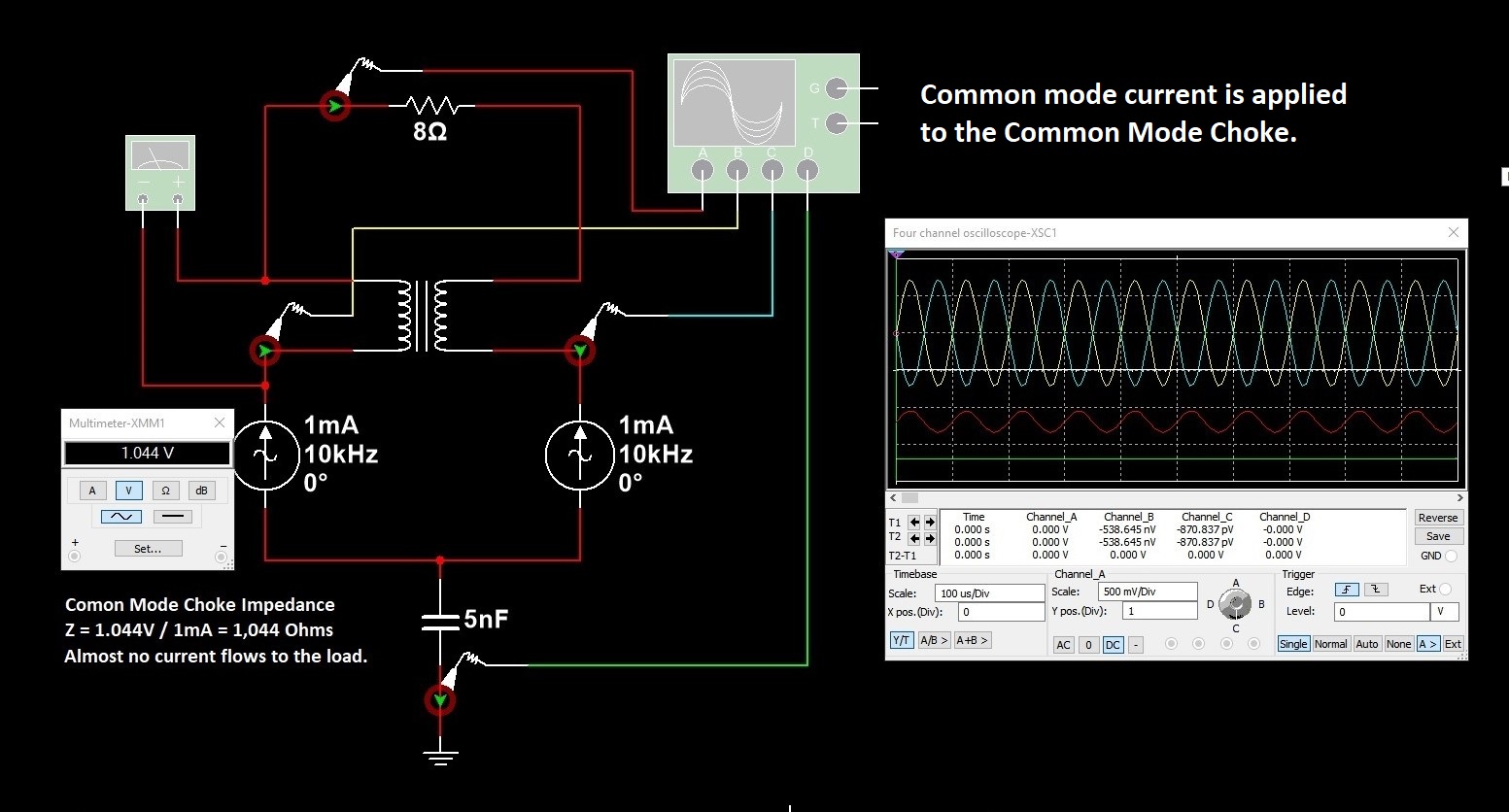 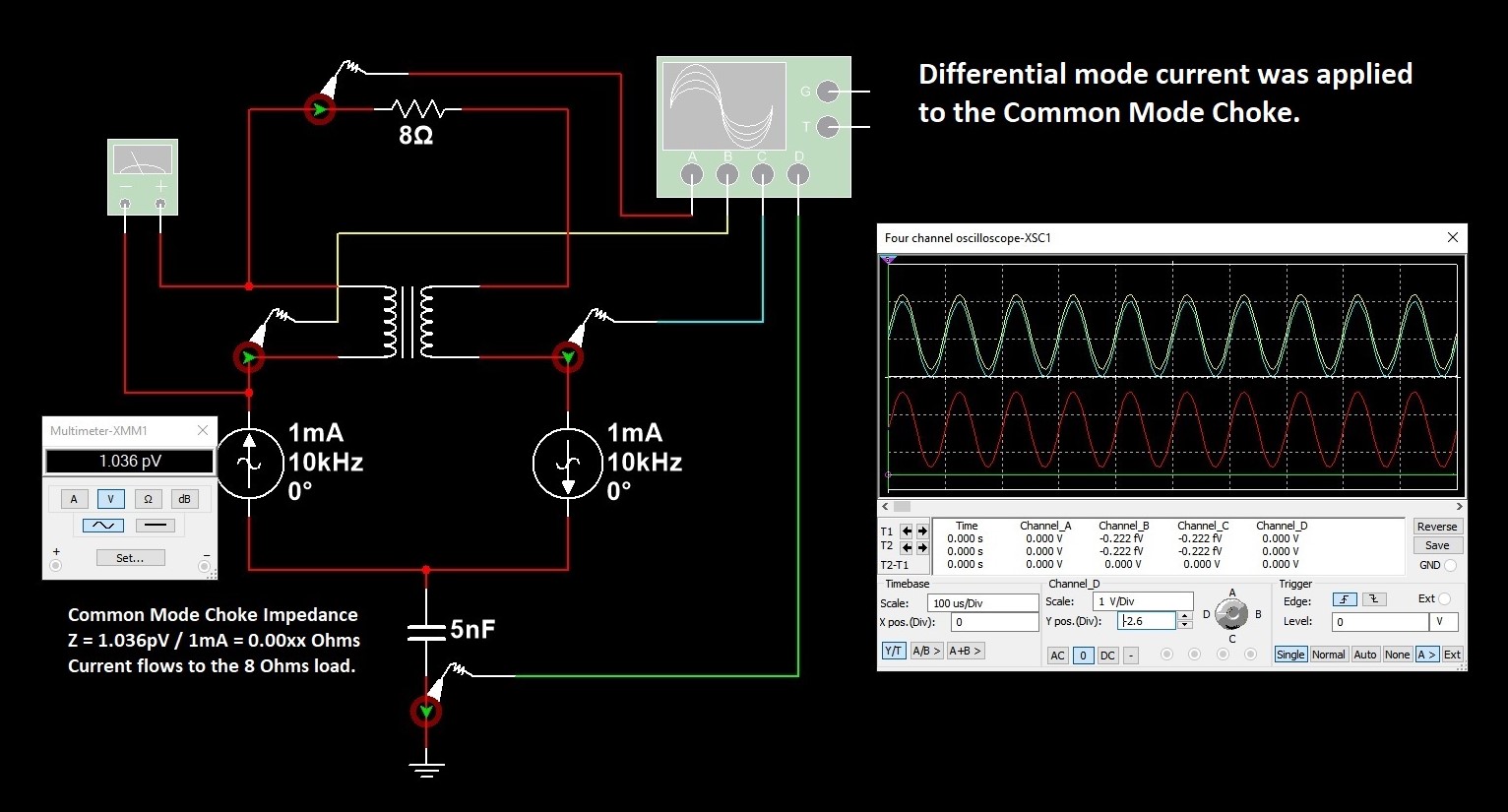 Considering same noise magnitude and same polarity the resultant is zero. There is no heating or power dissipation since its only current and the voltage across the winding is zero thus the power is zero. Only current electro magnetic flux through its coupling ferrite core are cancelled out in the common mode choke 1:1 current transformer. Common mode noise will be neutralized when it passes through a commom mode choke. 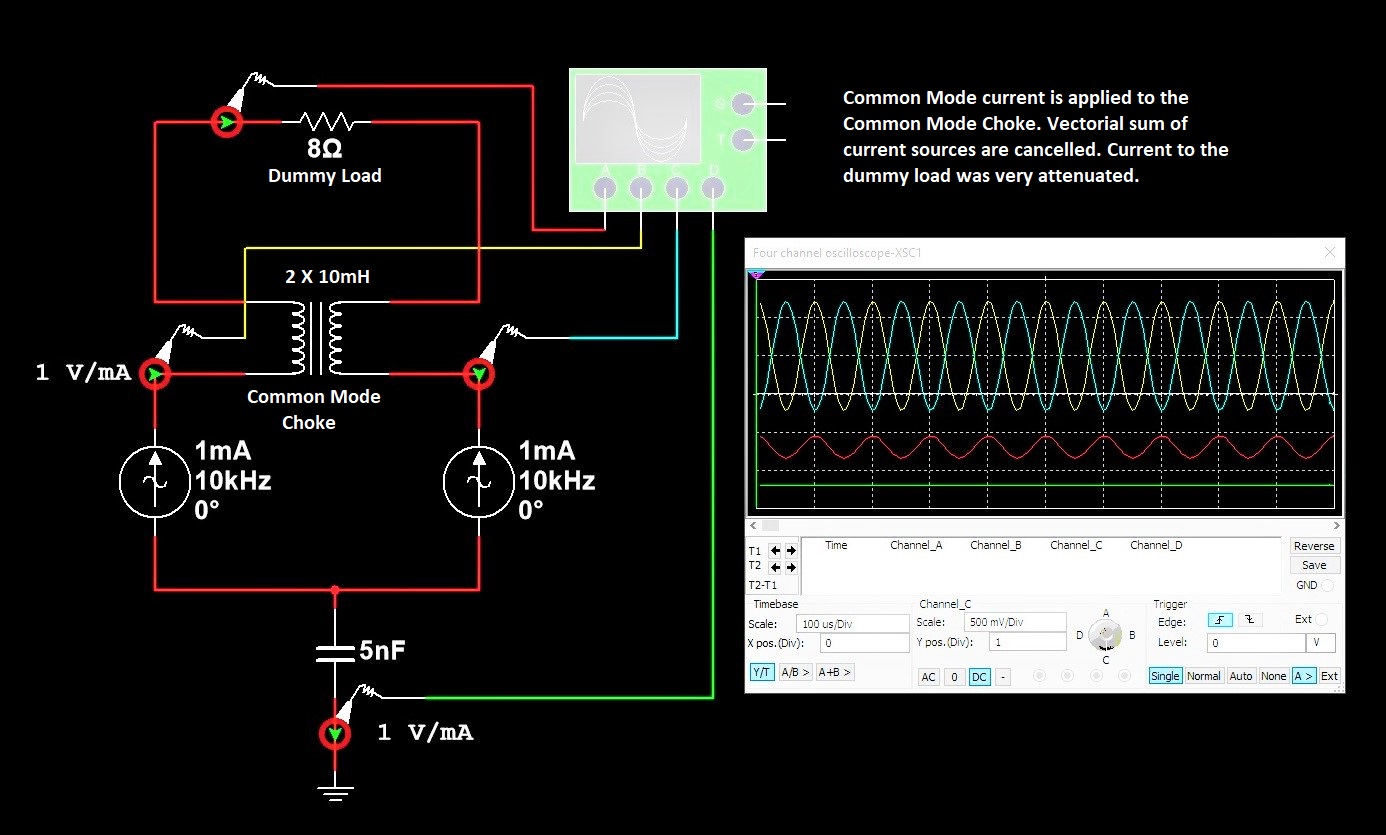 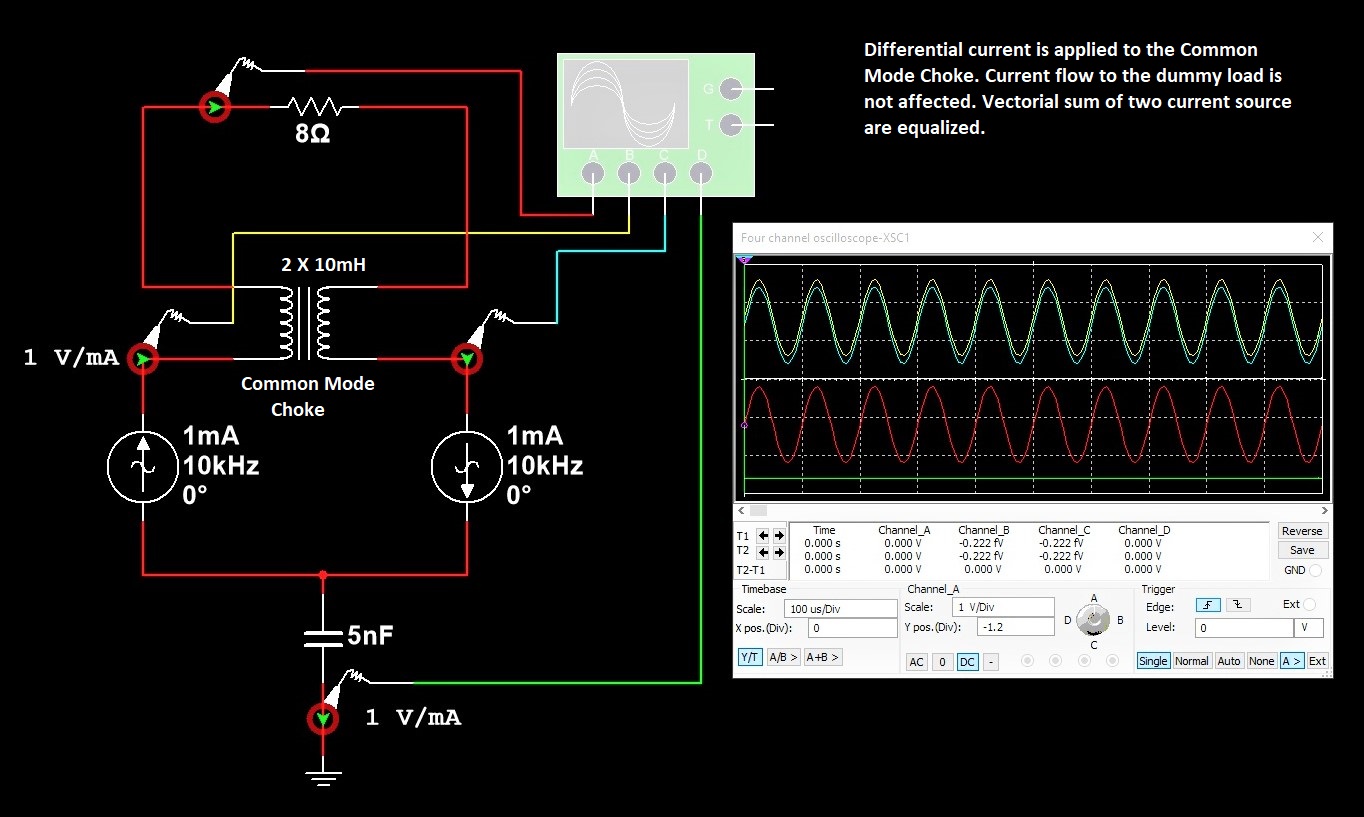 Not the answer you're looking for? Browse other questions tagged common-mode common-mode-choke or ask your own question.

0
How does a CM choke reject common-mode noise while allowing the signal of interest?
0
How to select appropriate ferrite beads for power supply rails
1
Purpose/Difficulties of having a common mode choke

4
Why the common-mode gain of the differential pair is almost zero?
4
What is the practical advantage of using mirrored signal outputs eventhough what matters is balancing the wires?
0
common mode choke on DC line
0
How do non-flowing common mode or bias currents cause common mode range to exceed/float?
3
How does placing cap between signal GND and earth GND solve common mode noise?
1
What is a power factor correction choke (PFC choke) and how does it work?
0
Does input impedance of an isolation amplifier or a transformer have impact on common mode to differential mode conversion?
0
How is the differential mode noise suppressed by adding a capacitor across the Lines
2
Is this explanation of a common-mode choke correct?
0
Paralleling common mode chokes