The text describes "Internal Weak Pull-Ups and Pull-Downs" in the book Microcontrollers From Assembly Language to C Using the PIC24 Family:

I get that a high resistance leads to a weak current output from the resistor. It's the way it is worded that doesn't register based on the previous definition of a pull-up resistor which is simply to ensure that there exists a logic level and not a float, and with the control being dictated by a pushbutton.

How can an external driver [a device that controls high and low output to the input of circuit in question] "overpower" the pull-up resistor? By increasing this current? If that is the case, doesn't V = IR imply that an increase in current increases the voltage? If this is true, how can a 0 input be generated when both scenarios have two different levels of currents flowing, which both take the same path down the pull-up resistor and either to the input, or to ground, based on whether or not the pushbutton was pressed? I am assuming based on my careful analysis of wording that the effect of "pull[ing] the current to near ground, producing a 0 input" can only happen if an external driver "overpowers" the pullup resistor.

The pull-up is just a resistor connected between input pin and power rail. Weak pull-up is usually equivalent to about 50 kOhm, but sometimes it gets specified in terms of "pull-up current". This resistor pulls the input state to HIGH level, providing a defined state and avoid uncertainty related to manufacturing imperfections.

How an external driver can "overpower" the resistor? Very simple, it just drives whatever it wants, ignoring the resistor, because the resistor is weak (3V / 50k = ~ 60 uA), and the usual external driver is "strong", at least 2 mA. So it overpowers the high level to any level the driver wants. What is the problem here?

The rest of the wording refers to a particular implementation of this weak resistor, in a form of FET, apparently to be able to configure/disable this pull-up if necessary. 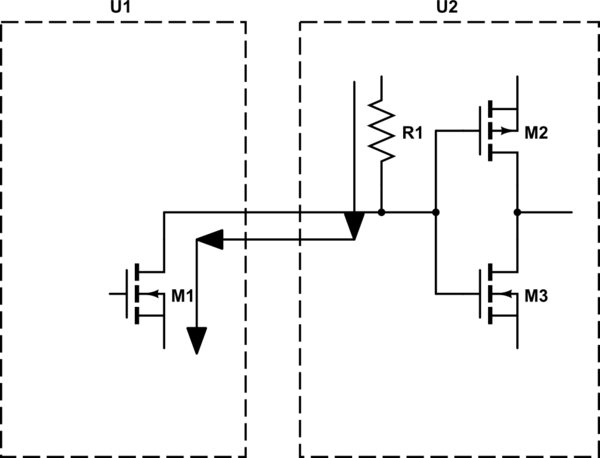 M1 draws all the current from the pull-up, drawing the voltage towards 0.

It sounds like it might just be the terminology that's confusing you. To look at this a different way, imagine a standard pushbutton interface: 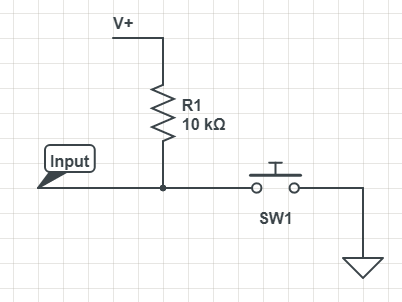 In this case, your textbook might say that the "...button is providing a short-circuit to ground which will overpower the pull-up resistor..."

I hope this helps. Also, it's a good demonstration of why we choose a large pull-up (or pull-down) resistor. If the resistance was too small, a large current would flow when the button was pushed!

Not the answer you're looking for? Browse other questions tagged microcontroller pullup or ask your own question.

0
Can this active-high scenario be achieved without an external pull down resistor
3
External pull-ups with Atmel microcontrollers: what assumptions can be safely made about the impedance in tri-state mode?
3
Pull-down resistor confusion
0
Is a floating pin equivalent to a very weak pull down?
0
Comparator have hysteresis with pull-up resistor?
1
Is it generally OK to ignore the current in and out of a MCU pin when analyzing circuit external to the MCU?
0
NRST Pin pull-up resistor on STM32F303RET6
1
DRV8860 - Open drain output with 1.4k internal pull-up - How to understand this low value