Why does this CO detector forbid the use of lithium batteries?

I have several Kidde KN-COB-LP2 CO detectors installed in my house. They look like this: 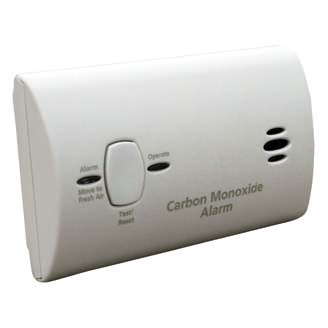 They operate on standard AA-size alkaline batteries, and typically last several years on such batteries.

The manual says this about replacing batteries:

When replacing the batteries, use one of the following approved Alkaline brands:

These batteries can be purchased where you bought the alarm or at a local hardware store. Use of a different battery may have a detrimental effect on the alarm operation.

NOTE: Do not use Lithium batteries in this unit. (emphasis in original)

While they work fine with other quality alkaline batteries from reputable manufacturers, I'm curious as to why the manual specifically forbids the use of lithium batteries.

Batteries like the Energizer L91 "Ultimate Lithium" use Li-FeS2 chemistry and produce a nominal 1.5 V per cell, just like alkaline batteries. They also tend to last longer than alkaline batteries, so why not use them?

Inquiring with Kidde met with unhelpful responses that basically amounted to "The manual says so." without going into more detail.

The only technical reason I can think of is that the discharge curves for lithium and alkaline batteries are different, and the low-battery warning might not activate at the same level with lithium batteries as it would with alkaline.

I also imagine there's regulatory reasons, such as the detector being certified after undergoing tests with the specific listed alkaline batteries but, having not undergone testing with lithium batteries, those are not allowed to be recommended in the manual.

Are there other reasons?

The only technical reason I can think of is that the discharge curves for lithium and alkaline batteries are different, and the low-battery warning might not activate at the same level with lithium batteries as it would with alkaline.

Alkaline batteries tend to exhibit a relatively smooth, gradual voltage drop, whereas lithium batteries will deliver a more constant voltage up until they're nearly discharged, at which point the voltage (and available current) will plummet. This is desirable for most applications, as it maximizes useful runtime. However, in a CO detector or other safety systems, it means that, by the time the device is able to sense that the battery voltage is low, there may not be enough power left to sound a low-battery alarm. As a result, the user may never notice that the battery has died -- the device goes straight from functional to dead, without passing through the intermediate state of low-battery beeps.

Also, devices designed to operate with Li batteries have a discharge control circuit to limit the battery discharge level - when the low level light comes on may be too low for the Li battery raising other safety issues.

Not the answer you're looking for? Browse other questions tagged battery-operated detector smoke-sensor or ask your own question.

0
Why can't I use lithium batteries in this multimeter?

2
Best value Lithium ion/polymer cells/batteries
0
What battery is lightweight and has a lot of power?
18
Why do smoke detectors run off 9v batteries?
1
Does a simple bug detector detect electric field or magnetic field?
20
Why do batteries in consumer electronics get used unevenly?
0
Why does large 12v battery deplete quicker than 3 small AAA batteries