I'm reading through the datasheet for the TL064, which contains this figure on page 16: 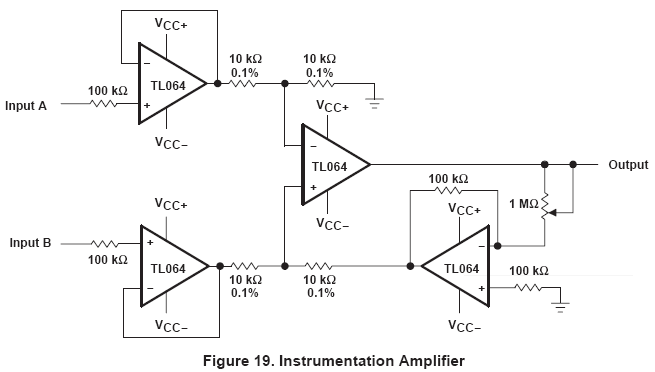 The datasheets specifies an input resistance of 1012 Ω, which is 10,000,000 times greater than 100 kΩ, so it doesn't seem to add anything to the already high-impedance JFET inputs. I thought perhaps it has something to do with input bias currents, but that's just me making a wild stab in the dark.

Curiously, figure 26 in the same datasheet (page 18) shows a two-op-amp version of an instrumentation amplifier without the 100 kΩ resistors at the noninverting op-amp inputs!

What's the purpose of the 100 kΩ resistors at the noninverting inputs in the above circuit? Am I missing something completely obvious?

IMO they serve no purpose, and they can be left out. If they were to minimize input offset, then there should also be one in the feedback from the output to the inverting input. Both inputs should see the same impedance.
Especially with very high input impedances like FET opamps there seems to be no need for them.

This may be a mistake in the circuit diagram. Possibly, the intent was that the 100K resistors be shunt resistors to the input, rather than in series. Shunt resistors would serve the purpose of lowering the input impedance to 100K. (Astronomical input impedance is not always desirable: for one thing, it is susceptible to noise.) The second purpose would be to provide a DC return if there is a coupling capacitor just before the input. Without the input referenced to ground, the capacitor will charge until it brings that input out of a useful range. Through a JFET input with a very tiny bias current, this could take hours or days!

Found a nice discussion of this here: http://www.analog.com/library/analogDialogue/archives/41-08/amplifier_circuits.html

(Nevertheless, this is "grasping at straws": because the circuit would then likely show the capacitor.)

As for having the resistors in series; I agree with the others. The likely reason would be current protection in case the input breaks down from overvoltage.

It is never discussed in the datasheet, but in practice, many voltage followers are unstable without the series input resistance. Try buiulding a voltage follower with an LME49710. Drive a 150 Ohm load. Use a 1 KHz sine wave. The output looks terrible, right? Now add a 10 KOhm series resistance on the input. Problem solved.

I too would like to hear an explanation for this.

I stumbled upon a in-amp circuit for current measurement that had similar, mysterious input resistors (1.3k on both inputs). Apparently the rationale behind the resistors is to limit fault currents in case the CM goes beyond rails, e.g. when disconnecting a sensor with long leads. This application note from Analog explains the situation in more detail.

The 100k resistors in the TI datasheet do seem a tad large however, and probably increase the system noise somewhat.

Beside the reasons that have been mentioned (protection, stability, ...), I want to add a possible reason: some opamps require that the source impedance of both inputs be matched to reach the lowest possible level of distortion. This is for example explained in OPA134 datasheet: 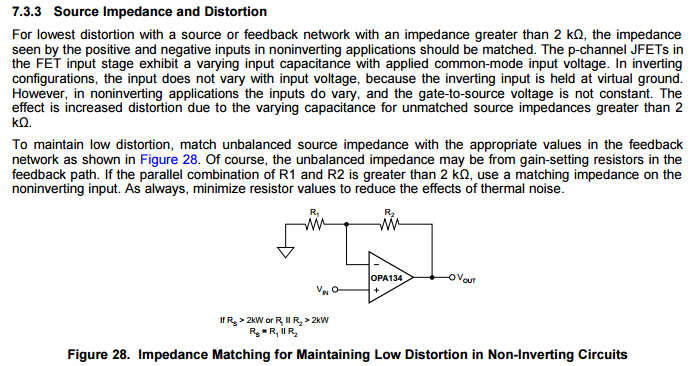 So the resistor would be there to match the other input's impedance.

Not the answer you're looking for? Browse other questions tagged resistors operational-amplifier impedance datasheet instrumentation-amplifier or ask your own question.

0
What is the role of the resistor at the input of the OpAmp?
10
Why include a small resistance between op-amp stages
1
Instrumentation amplifier: function of resistors at the input