I have a Digilent chipKIT Pro MX7 microcontroller development board. The majority of the boards I/O is through what Digilent calls a "Pmod" connector. What they really are is just 2x6 headers with a 0.1" pitch.

However, the connectors on the board are sockets. I'd like to connect things to this board through cable assemblies, I'm having a surprisingly difficult time finding a mating connector for these. I've found many housings, but they all say they're for female socket contacts and not male pin contacts.

It feels like things would be vastly easier if they had put male headers on the board, but it is what it is.

Is this kind of connector without a shroud something that actually exists? Or would I have to make some ugly workaround using a board mount connector?

(PS: I'm looking to make a cable assembly for all the pins, not use individual jumper wires)

The (almost certainly cheaper plastic imitation) "Dupont" crimp connectors all over the usual suspect e-commerce sites use the same housings for both male and female pins, and a 2x6 is definitely an available header size.

I believe Molex also offers suitable pins if you want an actual manufacturer. Note that the capture-in-housing feature of the Molex pins is positioned in a different place along the length of the crimp, so while they are more or less plug-compatible with other 0.100 families, the Molex pins won't snap into the cheap housings.

You'll get the crimp pins to work well on a wider variety of wire sizes if you practice at using a skill-in-the-loop crimper like the Engineer PA-09; the typical ratchet crimpers only work well for a narrow range of sizes.

Or you could just stick a male header in there and use a wire wrap tool for interconnect - though obsolete as an alternative to printed circuit boards, wire-wrap still shines at making benchtop lash-ups of assorted evaluation boards - the more effort you go to to physically mount the boards to a common base, the more the setup will last.

Digilent uses (and sells) female-to-female cables for this purpose, with 2x6 long-pin headers to join them to boards with female connectors. 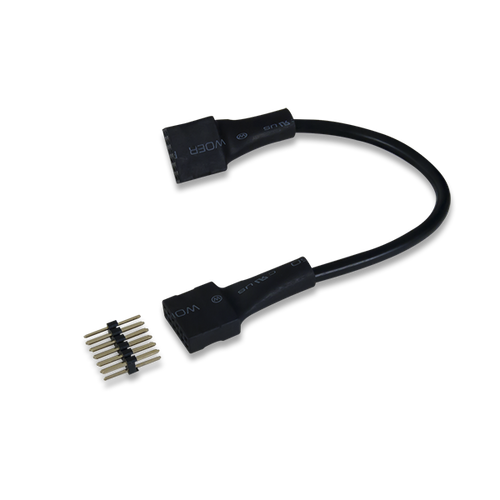 If you're building your own board, you can use angled 2x6 headers to put the connectors on the edge of the board, allowing them to be plugged directly into another board with female PMod connectors.

A workaround is to get a 2x6 male header with long pcb tails, so the pins are about the same length on both sides of the plastic carrier. Plug it into the socket, and now you have pins to connect to.

Not the answer you're looking for? Browse other questions tagged connector header interconnect or ask your own question.