Time delayed deactivation of a circuit

In a simple electronic circuit with a momentary switched LED (or bulb, tube etc.); what can be done to trigger the LED for several seconds before proceeding to break the circuit?

In other words; I want one quick press of the button to activate the LED, and also deactivate it automaticslly after x amount of seconds; just as if I'd been holding my finger on the button the whole time.

I probably didn't explain it very well, but I'm sure it should be easy to infer my meaning. FYI; I'm just trying to teach myself how to build basic, practical electronic circuits by tinkering with a breadboard.

I know it's pretty simple stuff; but at the moment, the configuration basically looks like this: 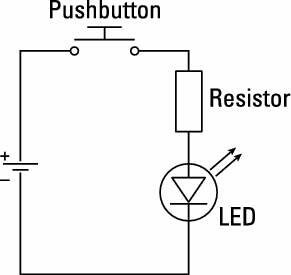 I thought I'd provide both a thinking process and design procedure, given the lack of information about the current or voltage supply. But I won't provide any part selections or values since there are no specifications for voltages or currents. So just the idea has to suffice for now.

The idea starts with the left schematic below: 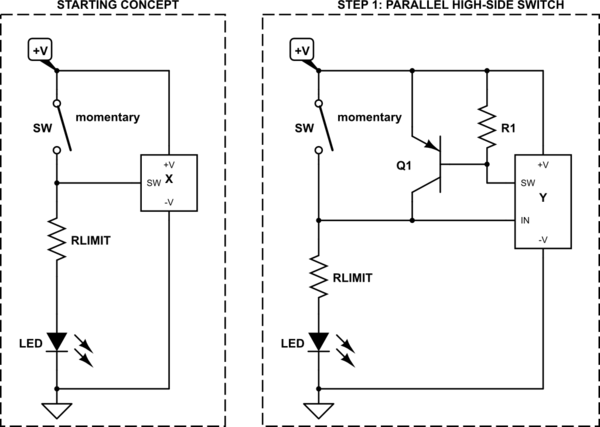 The left side shows the basic LED, current-limiting resistor, and the momentary switch. But there is an added "function." This function box is supposed to do the additional work of both detecting when the switch is momentarily closed (debouncing it, as necessary) and then bypassing the momentary switch for some time period. This means it will eventually have to include a "timer" and more.

Moving to the right side above, the first step is to just add a controllable high-side switch. In this case, I chose a PNP BJT as \$Q_1\$ for this purpose and added a "pull-up" resistor, \$R_1\$, which has a few simple uses: (1) it helps to remove stored charge in the PNP when turning off; and, (2) it holds the PNP BJT firmly off unless the rest of the circuit firmly turns it on.

The following steps continue the thinking. Starting again on the left: 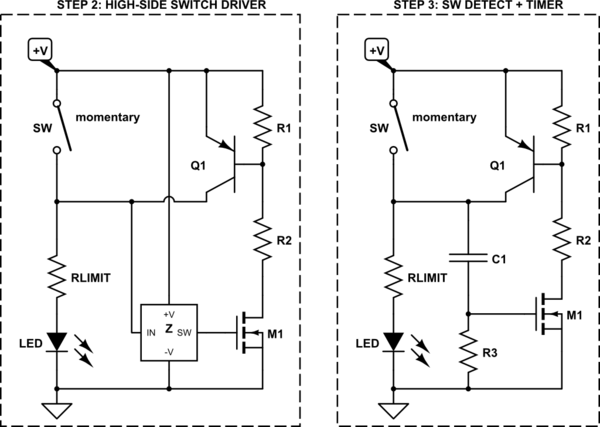 I chose a MOSFET here because I know that there will be some timing yet to be done and a MOSFET gate doesn't require current to hold the MOSFET on and the current leakage is very, very low. So this means that a simple RC timing circuit could finally be considered now. (Another BJT circuit would require current, too, and would be sweeping the problem under a rug to be solved still later.)

(Having gotten to this point, one might wonder why I didn't start with a MOSFET in the first place. Good question. And it's worth considering. But the answer relates to the arrangement of the momentary switch and the direction it pulls on the node it's attached to. And moving the momentary switch to the low side doesn't fix this problem.)

Now, moving to the right side (step 3) of the above schematic, I've added the RC timing circuit and also the switch detection. (They are one and the same.) Here, when the momentary switch pulls up in order to supply power to the LED, it also pulls \$C_1\$ up and with it the gate of \$M_1\$, which now becomes active. (This RC also acts to debounce the switch, too.) \$C_1\$ is nominally discharged at the start of all this, so the voltage across it should be close to zero prior to the momentary switch being engaged.

There is a problem with the version in step 3, though. When \$M_1\$ finally turns off, \$C_1\$ is charged up to some voltage (positive side above, negative side below.) When \$Q_1\$ also turns off as a result of \$M_1\$ turning off, this allows the load (the LED and its current limiting resistor) to pull the collector of \$Q_1\$ rapidly down towards ground (the negative rail.) This pulls the positive side of \$Q_1\$ close to ground, too. Which means the negative end of \$C_1\$ is very much lower than ground.

This isn't precisely a problem. Technically, \$R_3\$ does provide a DC path and it will gradually allow the capacitor to discharge. But leaving it to \$R_3\$ means the circuit is "mostly worthless" while yet another set of RC time constants goes by. So to hasten things, \$D_1\$ is added. This provides a very fast way for \$C_1\$ to rapidly discharge and reset itself after the timer expires. And so the circuit resets itself almost immediately. Which is a desired behavior, I think. (Without \$D_1\$, the circuit will behave "erratically" from the perspective of a user.)

Step 4 on the left side below shows the addition of this diode: 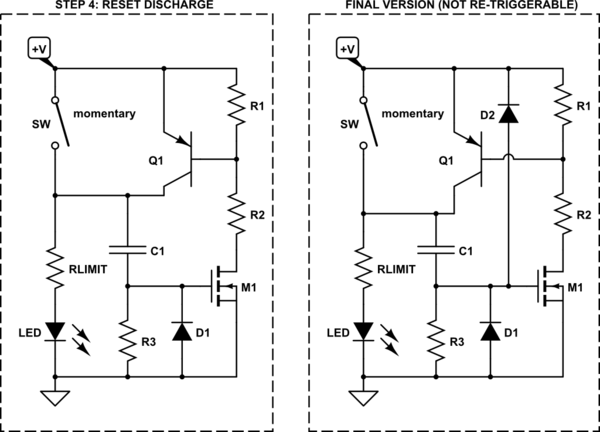 In the final step (to the right) one more diode is added to protect the gate of \$M_1\$ from excessive voltage as well as providing yet another discharge path for parasitic capacitances in the circuit.

(In all of this, the circuit so far assumes that the gate of \$M_1\$ can withstand the power supply voltage. If not, if the supply voltage required by the LED is too high, then this circuit really isn't a safe approach for the MOSFET and it would need further added design elements -- such as a zener to protect the MOSFET gate.)

Note that the above is not re-triggerable. Once triggered, its time period must be allowed to expire before the momentary switch can be used again. If one wants it to be re-retriggerable, then two new diodes need to be added: 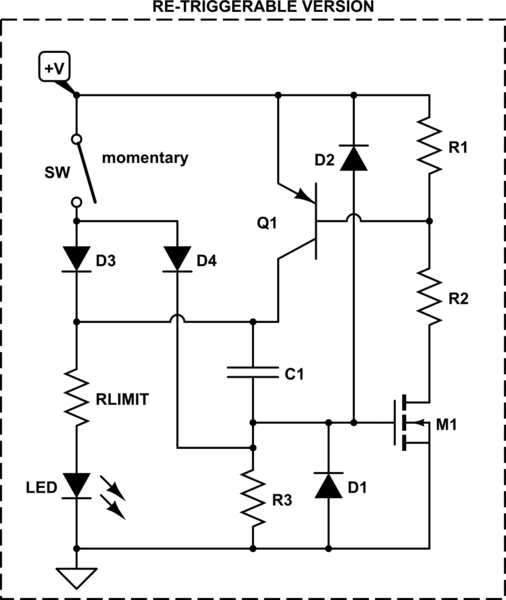 Those diodes allow the momentary switch to discharge \$C_1\$ as well as pull it up, so that the timing is reset when the switch is again pressed momentarily. (Two diodes are needed to avoid unwanted interactions between the nodes on either side of \$C_1\$.)

Note that no values or selection of parts is included in any of the above examples. That's because there are no voltage or current specifications by the OP. Given the lack of information, this is probably all that can be done for now. And even then, the circuit cannot be expanded easily to some of the high voltages and some newer LEDs may require -- such as LED filaments with 28 series LEDs (of a couple of types) that often require \$70\:\textrm{V}_\textrm{DC}\$ or more to operate. (MOSFET gates can be a bit too sensitive for such things.)

All I can offer are some notes.

Add a large capacitor from the top of the resistor to the bottom of the LED. When you press the button, it will light up the LED and charge up the capacitor. When you release the button, the capacitor will continue to power the LED through the resistor. The LED will extinguish slowly, rather than snap off, but this is a simple thing to try before moving to a more complex circuit.

Based on the battery voltage, resistor value, and LED type, it is possible to calculate approximately the capacitor size for a specified on time. For example, with a 9 V battery, 1 K resistor, and common green LED (2.0 V Vf), a 4700 uF capacitor will light the LED for about 3-5 seconds after the switch is released

You're looking for a "one shot monostable" circuit, or simply a "monostable". Google this.

Here's an example which should solve your problem. 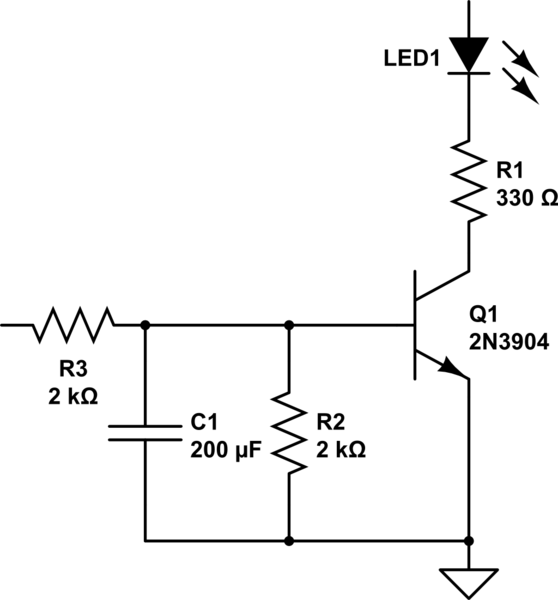 You can try to build a circuit like this. C1 will hold the voltage for a short while to allow Q1 to flow current from it's Collector to Emitter.

Here's the schematic, the one you should choose is the one to the right.

Here's the link if you want to interact with the schematic. You'll see why the one on the right is the correct one.

The 10mΩ resistance is only there to make the simulation stable, if it's removed the simulation kind of bugs out. So when you make the circuit, just think of it as part of the wire you're soldering, it's not an actual extra component.

This might be more viable, a Darlington transistor. This way you don't need gigantic capacitors of 200µF or 22µF, you'll be fine with small stuff, like 1µF.

All switches including time delay ones must be well defined by output voltage and current. The time delay is easier with FETs due to high input R low output R.

Fast on, slow off, low in current and high output current, time duration and any other features affect the analog, or digital options avail. 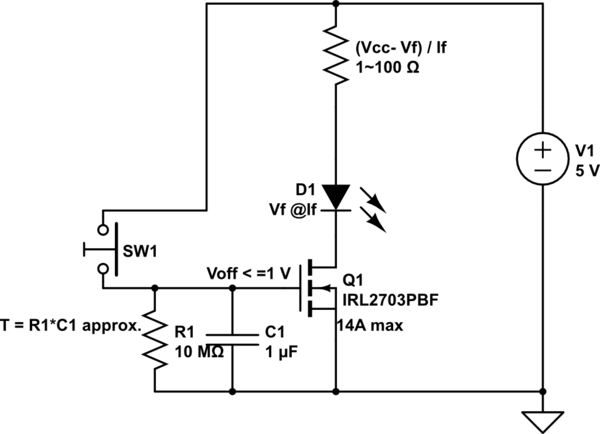 Not the answer you're looking for? Browse other questions tagged circuit-design basic education circuit-theory practical or ask your own question.

0
How can I modify this circuit for some hysteresis and better design?
0
Most efficient delay circuit
0
How do you make a digital counter circuit which counts to 10 minutes and 15 minutes, it will give a signs buzzer?
0
Wiring an alarm to continually sound when activated