I'm trying to control a (cd rom - head) coil for experimenting with power MOSFETs and transistors. I control it with a potentiometer connected as a voltage divider. It works right I suppose but I get a tiny tremble. Is it normal? Can it be eliminated? (currently I don't use any heat-sink for the MOSFET). The power supply is a wall wart with 1 Amp rating. 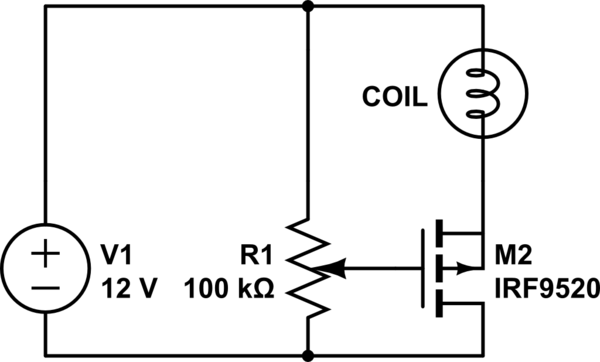 Summarizing the comments: It would appear you're getting ringing in your circuit because the mosfet turning on is allowing your inductor to sink so much current that your supply rail is seeing a voltage droop. This should be solvable using whatRoughBeast's method of slowing down the inrush current of the mosfet by putting a cap on the gate of the mosfet to ground or Vdd. Either way will cause the mosfet to turn on slower preventing the supply rail from seeing voltage droop. Choose a capacitor big enough to slow down the rise time but small enough so that you can turn the inductor on and off quickly. It should be in the 10nF range probably.