I am working on a multi-range current source using APEX MP38 OpAmp to generate and force-in either 100mA or 2A into a mainly resistive load. I came across Howland Current Pump configuration and I hope that its going to work, but the preliminary simulation using LTSpice fails miserably.

The resistive load that I am dealing with changes its resistance greatly due to environment temperature and the temperature induced by the current. Using discrete current sources I have observed that at room temp (25°), the resistance of this load is 20Ω and at 180° its 60Ω.

Now I want to have a current source that can output 100mA or 2A using a switch. Something like: 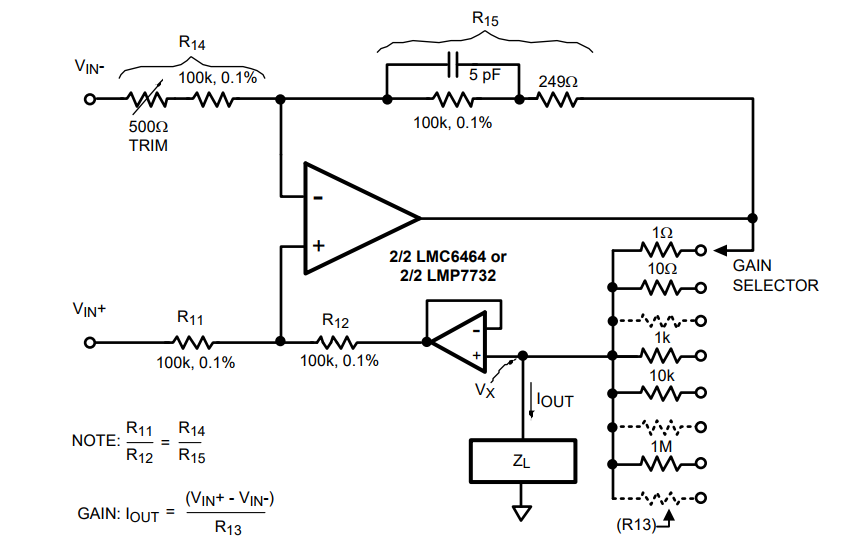 The simulation with LTSpice is not promising: 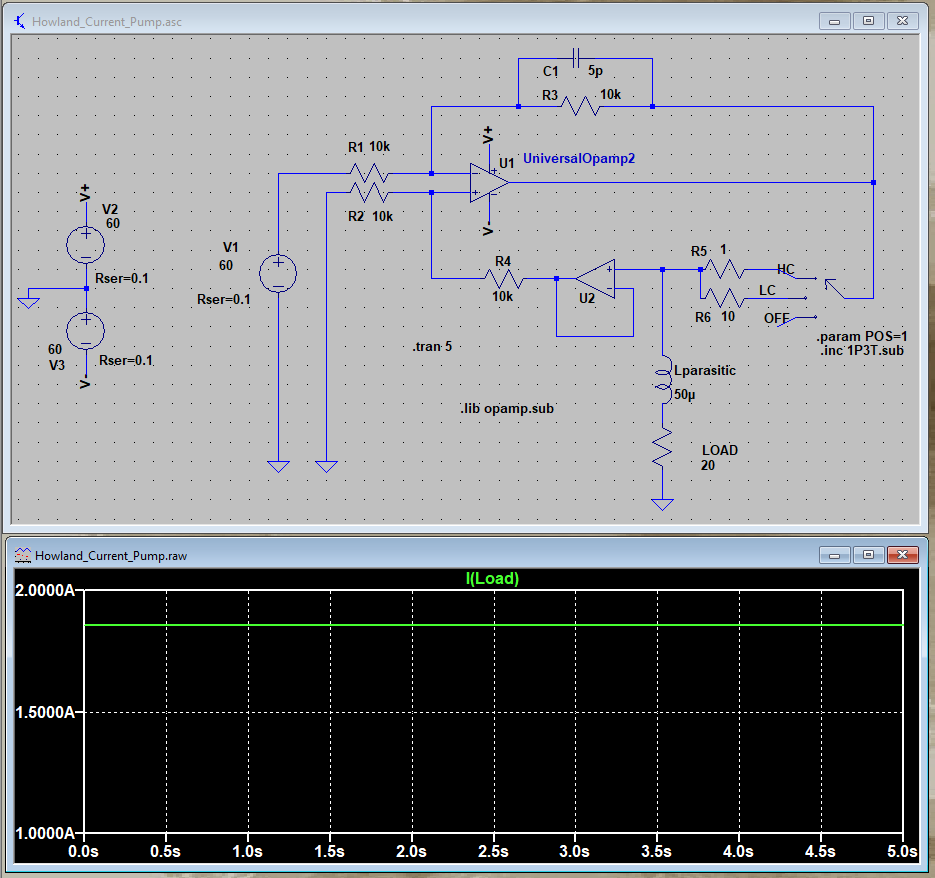 So my question is, can you please let me know if MP38 is a good candidate for this task? What kind of opamp I should use as the voltage follower (U2). Any ideas about input/feedback resistor values and their wattage? let me know if there is some information missing!

If you don't mind a certain inelegance (and power dissipation), you can work with a standard unipolar current source. This will look like 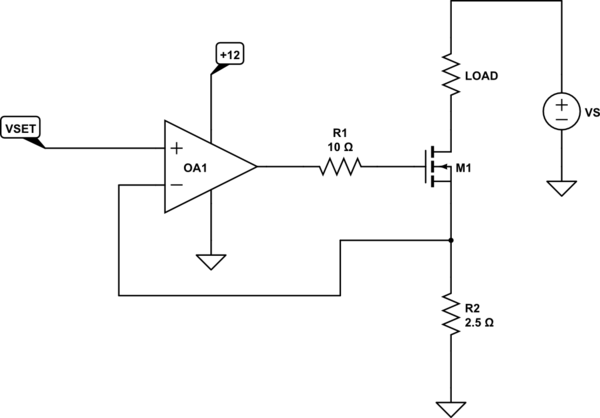 This is pretty simple, but it has its drawbacks, most notably efficiency.

At 2 amps, you're in an entirely new ballgame. You'll need at least 120 volts VS (to drive 2 amps through 60 ohms), so let's say you use a 130 volt supply. With a 20 ohm load, the load will drop 40 volts, the sense resistor will drop 5 volts, so the total voltage across the FET will be 85 volts, for a MOSFET power dissipation of 170 watts. You're unlikely to get this with any reasonable FET/heatsink combination, so you'll need to go to multiple FETs in parallel, and a very beefy heatsink (multiple pounds and forced air cooling). You would also need to be very careful about running your power ground in order to avoid parasitic voltage drops causing inaccuracy or (much worse) oscillation.

Oh yes, and the current sense resistor for the value shown will dissipate 10 watts, so you'll need something on the order of a 20 watt resistor just to play it safe.

But I'm sure you'll agree that the circuit looks simple.

The problem I see is that with a 125 volt supply and a 20 ohm load that only needs 40 volts across it to conduct 2 amps, is the volt drop across the "silicon" i.e. 85 volts at 2 amps - this is a power of 170 watts. The maximum power dissipation of the APEX amplifier is 125 watts.

You need a substantially different approach and I would recommend using PWM to produce a current into your load - should you not be able to live with the ripple voltage then an inductor and capacitor will also be needed BUT, this solution will not self-heat with 170 watts.

Something like this may be of some interest topologically: - 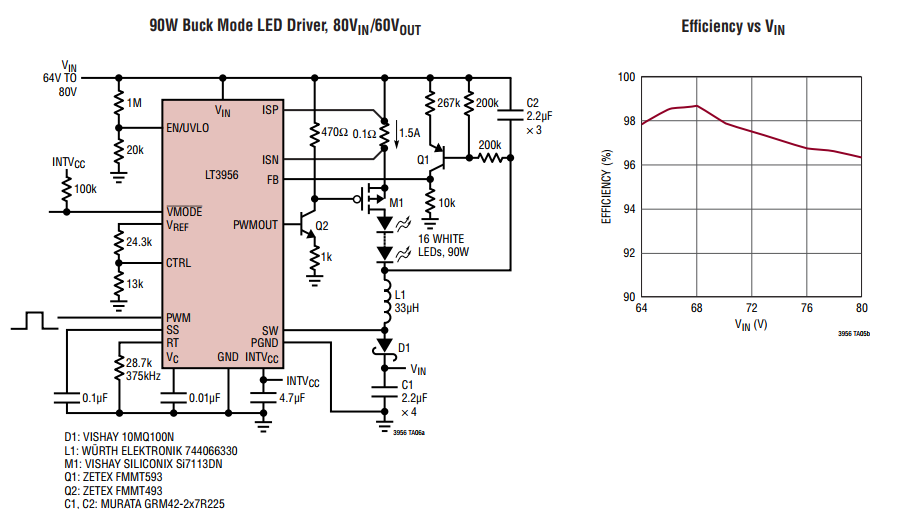 It produces a constant current up to 1.5 amps into a string of LEDs and, of course, the LEDs could be replaced by your load. Or maybe something that works from a lower supply voltage and steps up to produce a bigger voltage (again this is limited to only 1 amp): - 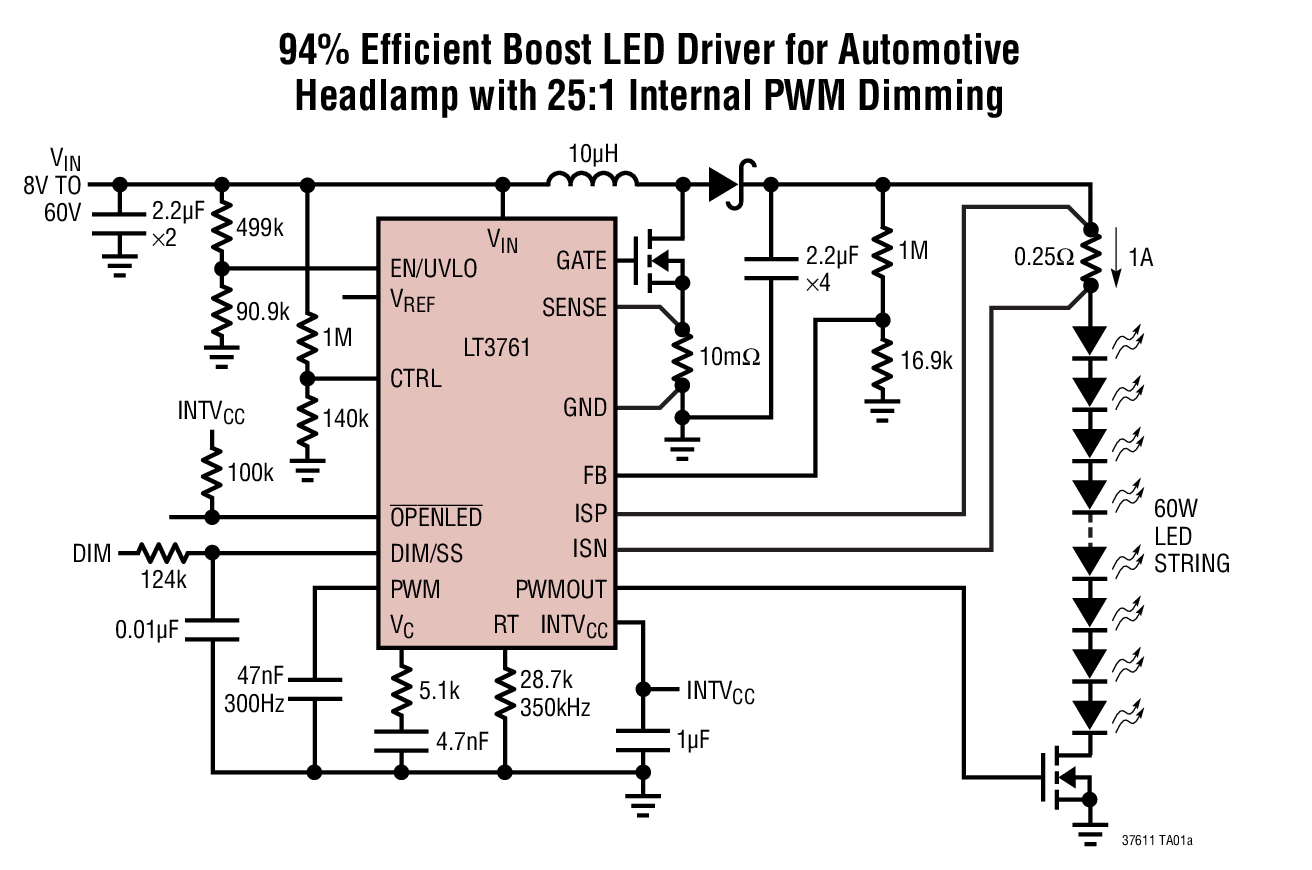 Not the answer you're looking for? Browse other questions tagged operational-amplifier current analog current-source or ask your own question.