The type of wire used in walkie talkie earphone

I have some Motorola Walkie Talkie TKLR T7 (seems only available in Hong Kong, cannot search much information), was trying to connect a pair of them to a relay. Not that I did not succeed, but I encountered some strange problem. 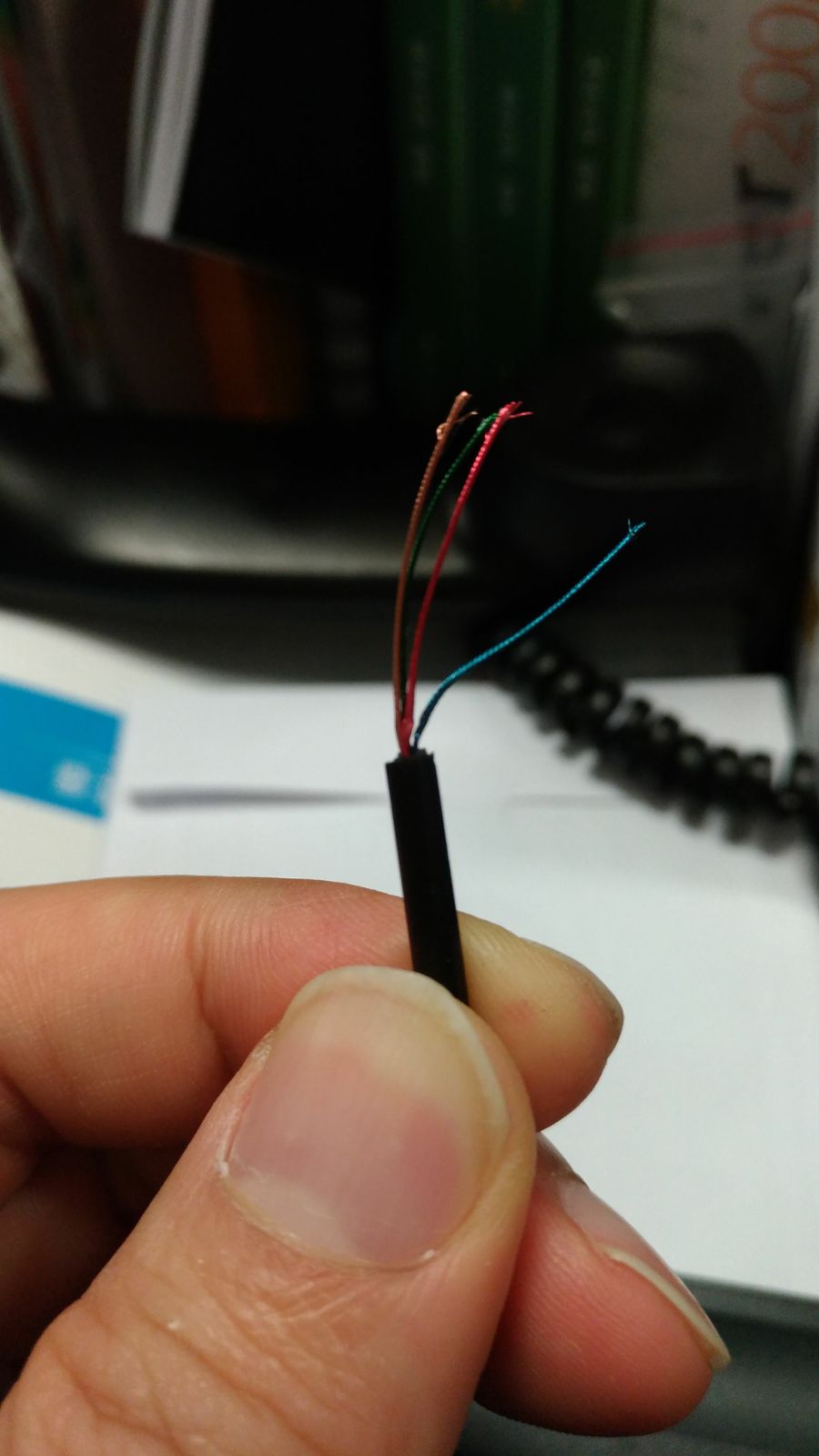 The earphone jack is 3 parts 2.5mm diameter 14mm length (Motorola M2 standard?), it is connected to the Speaker, PTT/mic, ground. When I cut open the wire, there is four separate wire of four colours (it was found out later that 2 actually connected to the same ground of the jack, so it is still 3 connections). Not knowing which wire is which, with the jack plugged in, I tried to short exhaustive combinations of 2 wires, by twisting them together or by using crocodile clamps, to init the push to talk signal, but the icon never showed up on the walkie screen.

Desperate, I actually peeled all plastic off a jack, and directly soldered some plastic coated copper wire to the 3 connection points, and then when I short 2 of them (ground and PTT), the push to talk icon is showing on the walkie.

So I can conclude that when I was using the 4 coloured wires, I did not make them connect, So I thought the coloured coating might be cloth like insulators. I tried to unwind the threads, only to find out that the coating seemed to be very thin metallic wires twisted around some transparent rip cord like threads. And again no matter how I try to short the metallic like wires or the rip cord like thread, I cannot get the push to talk signal nor the icon on the walkie screen.

So can someone tell me what kind of wires are these? and where is the conducting metal part? is it the coloured thread or the transparent thread in the middle? if it is the coloured threads, how did they prevent themselves from shortcircuiting each other in the long wire? was there some filler that was destroyed when I rip the wire apart? Or was there some simple physics I have missed? And why did I fail to short circuit them?

Turning the comments into an answer...

The fine wires will be enameled copper wire. The enamel is a thin coat of insulation applied to the wire. It's normally translucent, and can be made in different colors. The enamel is thinner than conventional plastic insulation.

To make contact with it, for soldering or screw terminals, just scrape off the enamel at the ends.

Not the answer you're looking for? Browse other questions tagged wire short-circuit or ask your own question.

3
Choosing the right type of wire?
5
Is silver actually used for coating copper wire?
0
Shorting wire from headphones
1
TYPE-K Thermocouple wire to a thermistor
0
Connecting and soldering audio cable of several earbuds, but none is working
0
How to prevent noninsulated wires close together during manual wiring a PCB?
0
Beginner Question - Solder won't stick to a certain wire
0
splicing ac adaptor cord which is positive and which is negative?