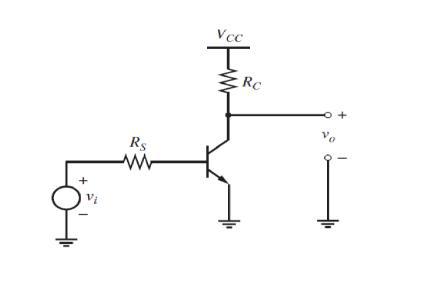 So I draw the small signal model as below:

I think everything is okay so far! Am I right?

In the next part of question, I have been asked to find the value of \$I_c\$ which we have maximum \$A_v\$ for it. I have been stuck in this point.

Would you please give me some hints?

Max gain for a CE topology is VDD / 0.026 volts. Assuming the Vsource drives the base directly.

You can get the gain from that quickly.

The task is to calculate the small-signal voltage gain based on \$R_s\$, \$R_c\$, \$I_c\$, \$V_A\$, and \$ \beta \$ for the given schematic diagram. Therefore, the small-signal model you have drawn does not correspond to the task because you have used small-signal parameters (\$r_\pi \$, \$g_m\$, and \$r_o\$) different from the required ones. Also, you do not specify anywhere what \$V_A\$ means, neither you use it and I must confess I do not have any idea as to its meaning here (any suggestion?). However, the designation \$ \beta \$ is normally used as a synonym for the hybrid small-signal parameter \$h_{21e}\$ (the suffix e indicates the common emitter topology), so it is obvious the small-signal model based on the \$h_e\$-parameters was assumed to be used for the calculations. The explored circuit including the mentioned full small-signal model then looks like this:

The corresponding equations of that model are as follows:

and the equations for the whole explored circuit can obviously be written as:

From the above equations there can be derived the small-signal voltage gain \$ A_v \$ of the circuit:

To find the \$I_c \$ at which the voltage gain has its maximum, the h-parameters as functions of \$I_c \$ have to be known (they are nonlinear functions, of course; W. Shockley transistor equations). Then the first derivative \$ \frac{\partial A_v}{\partial I_c}\$ of the function \$ A_v = f(I_c) \$ has to be set to 0 and the corresponding \$I_c(\frac{\partial A_v}{\partial I_c}=0) \$ expressed out of it. The second condition for the gain to be a maximum is that the second derivative of the same function at that calculated \$I_c \$ has to be less than 0. In fact, if the function in charge is known, it can also be plotted and its maximum found this way.

Not the answer you're looking for? Browse other questions tagged circuit-analysis bjt gain or ask your own question.

4
Av for small signal analysis with BJT for unbypassed emitter and ro in place
3
Inconsistency in the calculation of the gain of an emitter follower
0
Small signal analysis of MOSFET. Calculating Gain
1
Trouble solving for voltage gain
0
Signal parameters of a Darlington
0
Solving for the Voltage Gain in Cascaded Two-Stage Amplifier
0
quiescent point of two transistors BJTs
5
How to derive the precise gain of an NPN common emitter amplifier without emitter degeneration?
4
finding the output resistance of bjt folded cascode