Driving a proportional solenoid from PWM via NPN/MOSFET

I'm very new to electronics and just want to get some feedback on a circuit + hopefully some explanation about a couple of points: 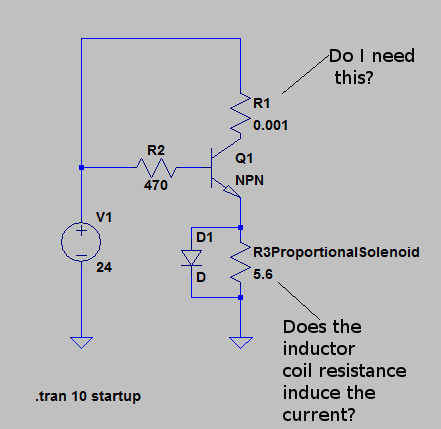 i) I have schemed the coil as a resistor (R3) - if the coil is 24v I assume that it's load is calculated from its coild resistance? (confused on this)

ii) I have put another resistor R1 which I think I don't need as a current limiting resistor - does R3(the coil) do this on it's own?

iii) The NPN should almost certainly be a mosfet as it is switching +2000mA - correct?

iv) I have put in a flyback diode - ignore if polarity is wrong I do understand the concept.

What else should I do? Any advice?

Ditch R1. Yes, 0.001\$\Omega\$ resistors exist, but what would you do with it? At 2A it will drop 2mV. The collector current is defined by the base current, there's no need to limit it this way (if that would have been the purpose).

You don't necessarily need a MOSFET to switch 2A, but if you use a BJT it will probably have to be a Darlington. OTOH a MOSFET is much faster than a BJT, so better suited for PWM work.

Then the flyback diode. It's wrong polarized, but you mention that in the question, so I won't say anything about that.

I missed the line that says you'll be driving it from a microcontroller. The following assumes you drive it from 24V, like in the schematic. Later I'll make a note about the microcontroller.

Important notice on the common collector configuration you're using. Even if you would drive it from 24V the emitter voltage won't be 24V, but 22V. The base voltage will be 24V maximum, and if it would drive the emitter higher than 24V minus 2 BE junctions there wouldn't be no current anymore.
If you drive it from a 5V microcontroller the emitter voltage won't go higher than 3V! Again, if it would be higher there wouldn't flow any base current. You might use a common collector with a 24V input, but not with 5V.

If you would want to use the Darlington, the KSD1222 is also a 40V type, with \$H_{FE}\$ of minimum 1000. Can drive 3A. But here saturation voltage can be as high as 1.5V. At 2A this means the transistor will dissipate 3W, so you'll need a heatsink. The MOSFET is the better solution.

As in your last question, you exhibit major misconceptions about how transistors work and how they can be applied to circuits. Since it's not clear what you were thinking in coming up with the circuit you posted, I won't go into all the things wrong with it but instead show how to solve the problem.

To be clear, I'll assume the problem is to control a 24 V 2 A solenoid proportionally from a 5 V digital PWM output. The PWM duty cycle is intended to be roughly the solenoid drive level. A 24 V supply with at least 2 A capability is available.

Since you need considerable current, a FET is easier to drive in this case. A NPN as low side switch would work, but even assuming a generous gain of 50 for a power transistor that can handle 2 A, that still requires 40 mA base current. That is more than can be expected from a ordinary digital output, so would require additional gain. The IRLML0030 is a easy solution since it is voltage driven instead of current driven and can hanlde this voltage and current. It is guaranteed to have no more than 40 mΩ channel resistance at 4.5 Volts gate drive, which dissipates only 160 mW at the full 2 A load. It will get warm, but that's still doable for a SOT-23 package.

D1 is there to provide a path for the solenoid current immediately after Q1 switches off. The solenoid coil looks like a inductor to the driving circuit. Without this diode, the voltage at SOL- would rise to whatever level it takes to force the same current as before the FET switched off. This would destroy the FET rather quickly. Note the orientation of D1. It does not conduct when the FET is on. It is also Schottky for low forward drop, but more importantly for fast reverse recovery time. The solenoid will surely still have current thru it when switched on again to start the next pulse. A slow recovery diode would get major backwards current thru it for a while. This would eventually damage both the diode and the FET.

I would drop the pointless tiny collector resistor, and put the load in its place. Connect the emitter to ground with no resistance.

If you must have one end of your load at ground potential (while keeping with the positive power supply), then use a PNP-transistor-based circuit instead.

You do not want any resistance in the emitter circuit because that creates negative feedback, which greatly increases the impedance of the base circuit, making it harder to drive in the required base current for saturation. (Feedback reduces gain, opposing the drive to saturation, which is bad in pure switching.) From the point of view of the base, the resistance through the emitter is approximately multiplied by the gain, so 100 ohms looks like 10,000 if the current gain is 100!

In switching, you want hard saturation, which keeps the voltage across the transistor to a minimum and hence power dissipation.

The 2SD882 NPN medium power transistor can handle the 2A of collector current, has a high \$H_{FE}\$ and low saturation voltages. Look for the NEC ones; don't even bother looking at other manufacturers' datasheets for the same part number. The NEC ones are graded by DC current gain with a letter grade, E being the highest (200-400). (This is given in the datasheet from NEC and marked on the part, but not others I have looked at). I bought the NEC ones before, over the counter from a local supply. All their \$H_{FE}\$ values tested at around 360, and these only marked as P grade (second highest).

The \$V_{CE}(sat)\$ of this transistor is cited as only about 0.3V at 2A of collector current. This gives a 600 mW power dissipation at saturation, which is not down to MOSFET levels, but respectable. According to the graphs, in the datasheet, 0.6W is within the range that requires no heat sink, up to an ambient temp of around 70C. It's easy to bolt a small heat-sink onto this part.

Not the answer you're looking for? Browse other questions tagged pwm solenoid or ask your own question.

2
Safe to use PWM source to control lights via MOSFET?
2
Picking out correct MOSFET for solenoid PWM control?
5
Choosing a MOSFET for solenoid control via Arduino
2
Using a MOSFET or BJT instead of solenoid
1
EMC considerations for driving a solenoid via PWM over a long cable
2
Mosfet overheating under pwm
4
Solenoid doesn't actuate when driven through MOSFET
2
555 timer circuit switching automotive solenoid with PNP & NPN switching transistors
1
MOSFET for PWM control on a solenoid