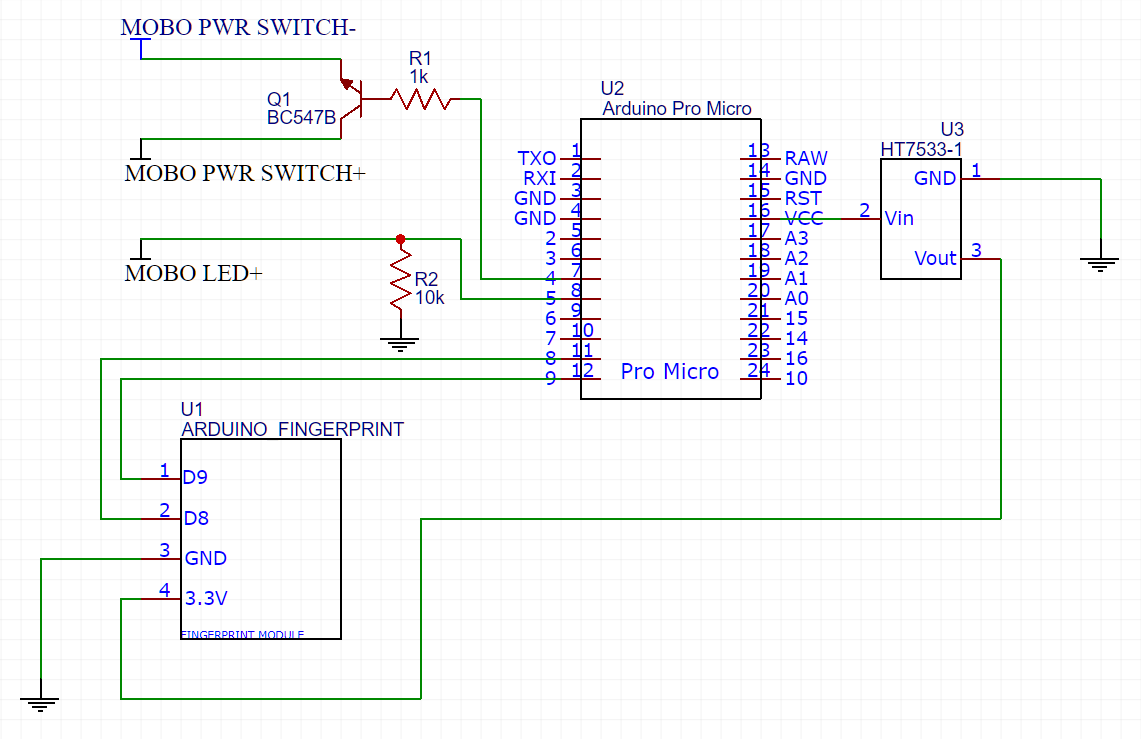 I have the above circuit connected to my computer. The Pro Micro is running the following program (code HERE):

As long as the Pro Micro is powered, the setup works with no issues. But when I unplug the Pro Micro, the computer shuts down and I don't understand why. And it's not momentary like a button press. It's like the transistor is on fully, resulting in a long button press.

Can anyone help me understand why this is happening when unplugging the Pro Micro?

The computer turns off because the end R1 is then floating, and thus the base of your transistor is floating. I suggest pulling pin 4 HIGH with a resistor

From your comment, it sounds like the Arduino is still on even if you're removed power from it. You can confirm it by measuring VCC and also Pin 4 output. How can this be?

That's because the input of most CMOS ICs look like this: 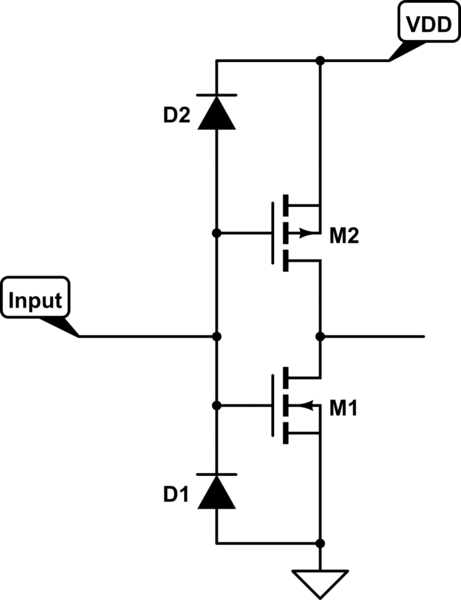 Inside the Arduino and nearly all CMOS ICs, it has diodes on the IO pins as shown above. These diodes do nothing in normal operation, but if the pin gets hit with a static zap (ESD, electrostatic discharge), they dump the energy into GND if it was a negative polarity, or into the power rail if it was a positive polarity. The power rail typically has big capacitors that can absorb this energy and prevent the gates of the internal MOSFET transistors from getting damaged.

There's a few ways to isolate this. The cheapest cheesiest way is to use a large value resistor, like 10k in series and maybe 100k pull down. This way, even if LED is at 5V, the current through the 10k is so tiny that the Arduino does not power on.

Another (better way) is to have the LED drive an NPN transistor, and then the Arduino senses the collector side just like the way you have Q1 and R1 in your circuit, but facing towards Arduino. I can draw a schematic but I'm sure you get it. Hope that helps, -Vince

4
Microcontroller soft off circuit not working - why?
5
What is required to activate the “PS_ON” on the motherboard, to power on a computer? Looking to use a microprocessor/accessories to power on a pc
1
Multipurpose momentary button - microcontroller/arduino/esp8266
2
Multipurpose momentary button - microcontroller/arduino - Which mosfet to use?
2
What are some reasons my atmega32u4 loses program when disconnected from power?
0
Alternative On/Off Toggle momentary button and Raspberry
3
Arduino Self Power Circuit
0
Matrix of SPST switches and buttons with Arduino
1
Troubleshooting SC2262/2272 RF module interaction Arduino