What is the silver strip behind crystal in the PCB? 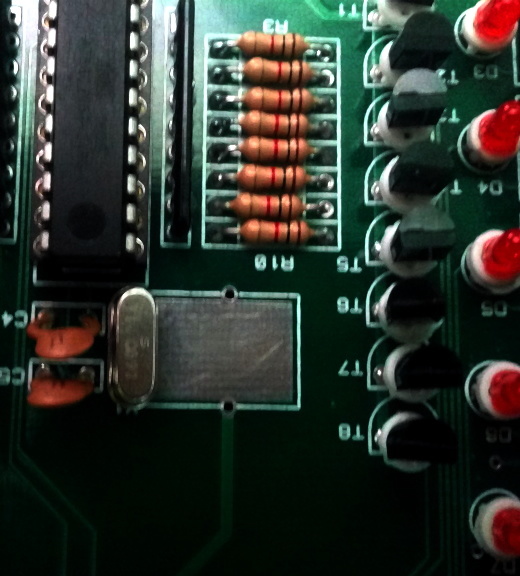 I came across a PCB, and I found a silver strip behind the crystal. What is that strip? Has anyone used it?

Here's a picture to help you understand better. The crystal's case can be soldered onto boards to secure them. 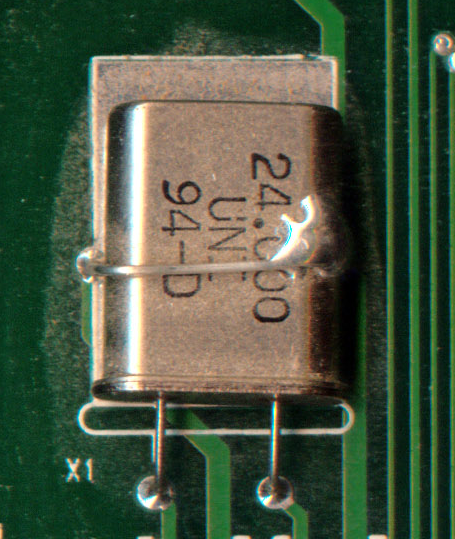 I wish I could find an image of this, but that is a ground pad.

When mounting larger crystals, like the one shown in Peter's answer, it is normal to bend the leads so the can is laid flat on the board to limit the height of the board envelope. (Note it does little with the crystal shown in your image.)

Unfortunately, when mounted flat in that position the thing is rather easy to move and will catch on things and bend up, eventually breaking the leads in extreme circumstances. The thing will also vibrate in a mechanically noisy environment.

As such it needs to be tied down.

Note the two holes on either sides of the pad. It is common to see a strap, made of an offcut of an axial component lead, bent to fit over the crystal and soldered into those holes with a further dab of solder where the strap touches the case on top to form a good ground for the case. Other times you may see a single hole at the top of the crystal for a single wire post or hook instead. 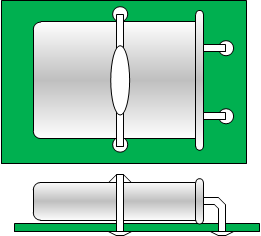 The reason for the big pad itself is a little less obvious than it first appears. The can on crystals is normally isolated from the pins, and as such it is prudent to solder the case down to a ground pad. (Why they don't have three pins to make it easy to ground the case has always eluded me...)

However, why the pad needs to be as large as the can is not so clear.

Crystals don't get hot so it is not for heat-sink reasons, and since the crystal is already enclosed in its own little Faraday cage, when grounded, E.M. radiation reasons don't make much sense either.

Personally, I think the large pad is more to prevent you from running other signals under the crystal. Doing so with a poorly grounded can could interfere with the crystal oscillations.

It's a solder pad for a full-size (HC-49/U) crystal, for mechanical purposes. Clearly it has no use when a small (HC-49/US) crystal such as the one in the photograph is used.

It'd be used to horizontally mount a larger crystal such as the following HC-49. The two through-hole pads either side are often used along with some wire to secure them in place, plus you may also find those connected to ground to provide some additional shielding. 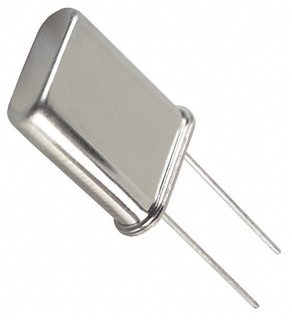 The white silver pad is for bending the crystal to side and soldering the same so that it also gets grounded.

Now there are multiple reasons that I have come across, some of which are:

You can get more information on these links:

Not the answer you're looking for? Browse other questions tagged pcb circuit-analysis pcb-design pcb-fabrication pcb-assembly or ask your own question.

8
What does “run a panel” mean in the context of PCB/PCBA fabrication?
4
What equipment and tools can be used to fabricate an 8 layer PCB for a prototype that has a 584-BGA microcontroller
39
Competing PCB Crystal layout recommendations
7
What is the best way to layout a PCB with crystal oscillators and MCU?
9
What is the gold-coloured area on this circuit board and what is it for?
6
What are the use cases for a closed solder jumper on a PCB?
0
PCB Crystal holder
0
PCB strip from manufacturer
8
PCB Crystal Layout
1
Suggestion for easy way to solder between LED strip and flexible PCB