How to check if the pin headers are soldered well?

I don't have much soldering experience. I soldered 5 level converters, they seem to work and look about the same as this STM32 as I soldered.

However, after a closer look I see not all pens 'shine' and some don't have a good form. Probably used too much soldering, because it was quite hard to determine (using too less cause nothing but heating pins which I also wanted to prevent more than needed).

How can I best test if all soldering connections are ok? I don't have any STM32 experience, so I don't know if there is a general way to do this except for writing programs/testing for each pin?

Or is it visible directly from the pictures that this will not work (I hope not).

(btw it's hard to make pics, they are all from the same STM32, the first pic shows soldering connections which are much darker than the second, the second looks more like the real thing).

Edit: I think I know what I did wrong ... since I didn't have much space the solder tip and solder tin sometimes might have touched directly, also during that the pin itself might not have been heated enough. Next time I really should make sure the tin and tip are on opposite sides of the pin. 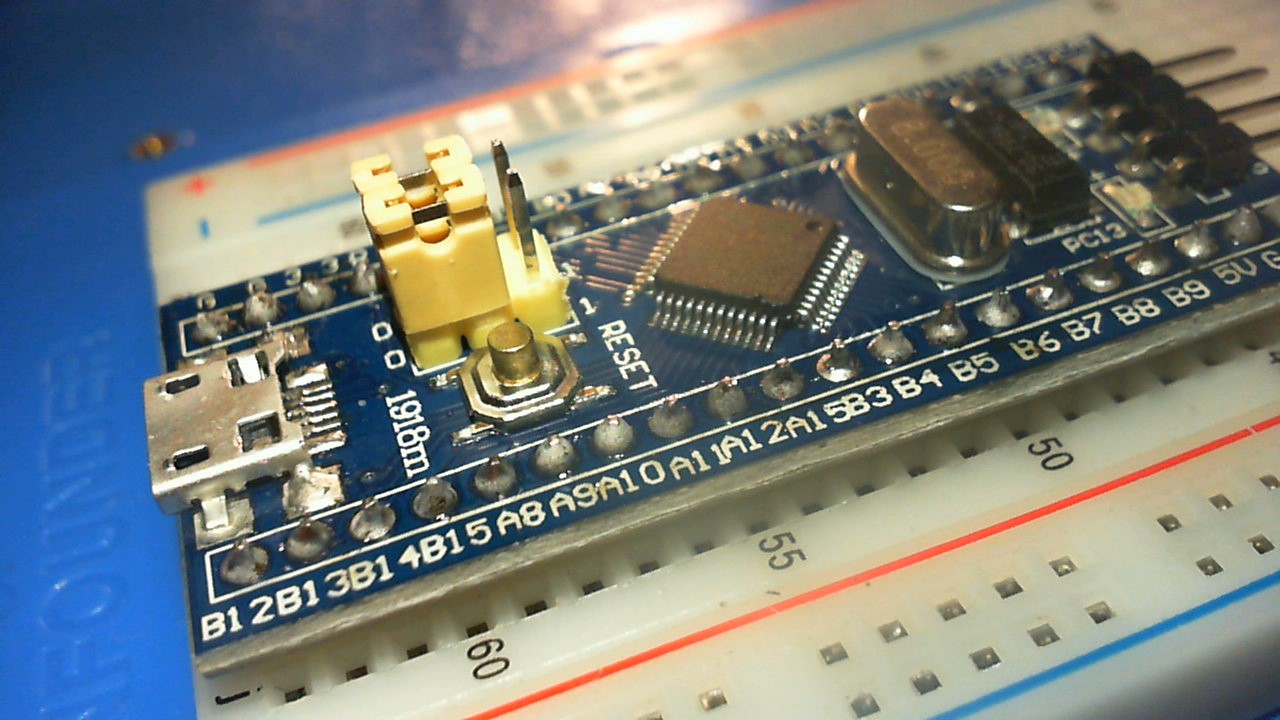 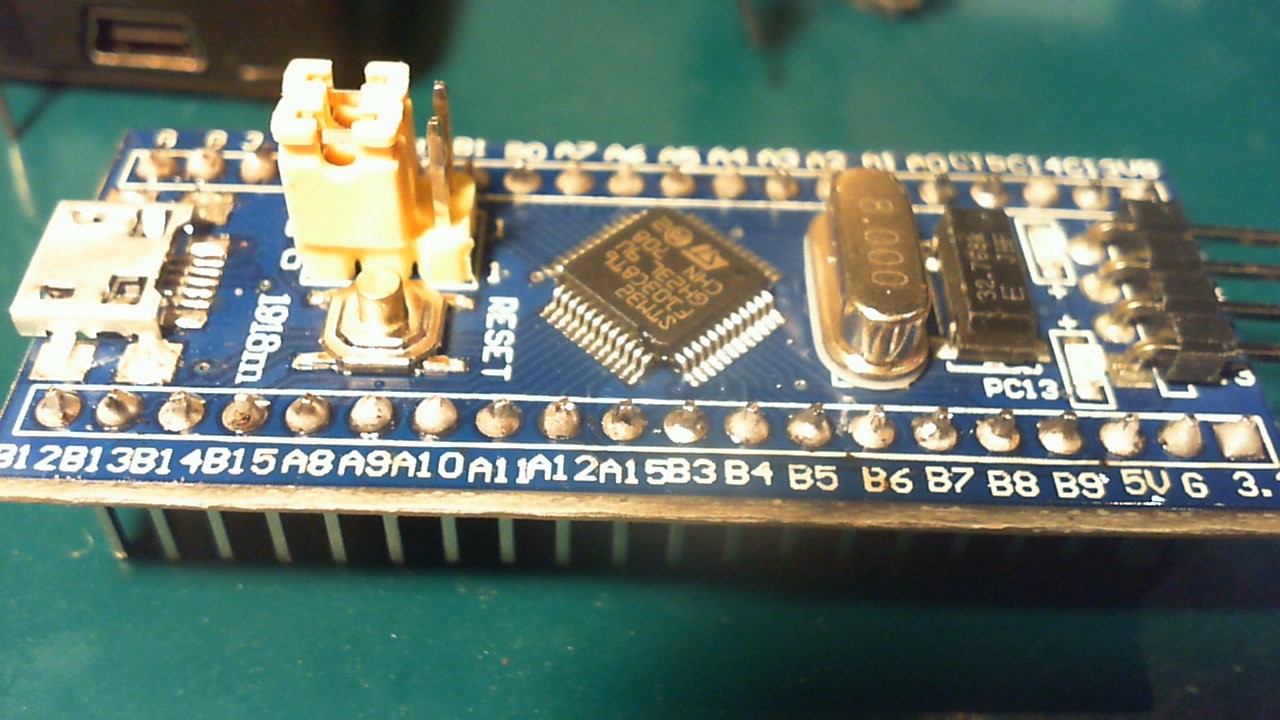 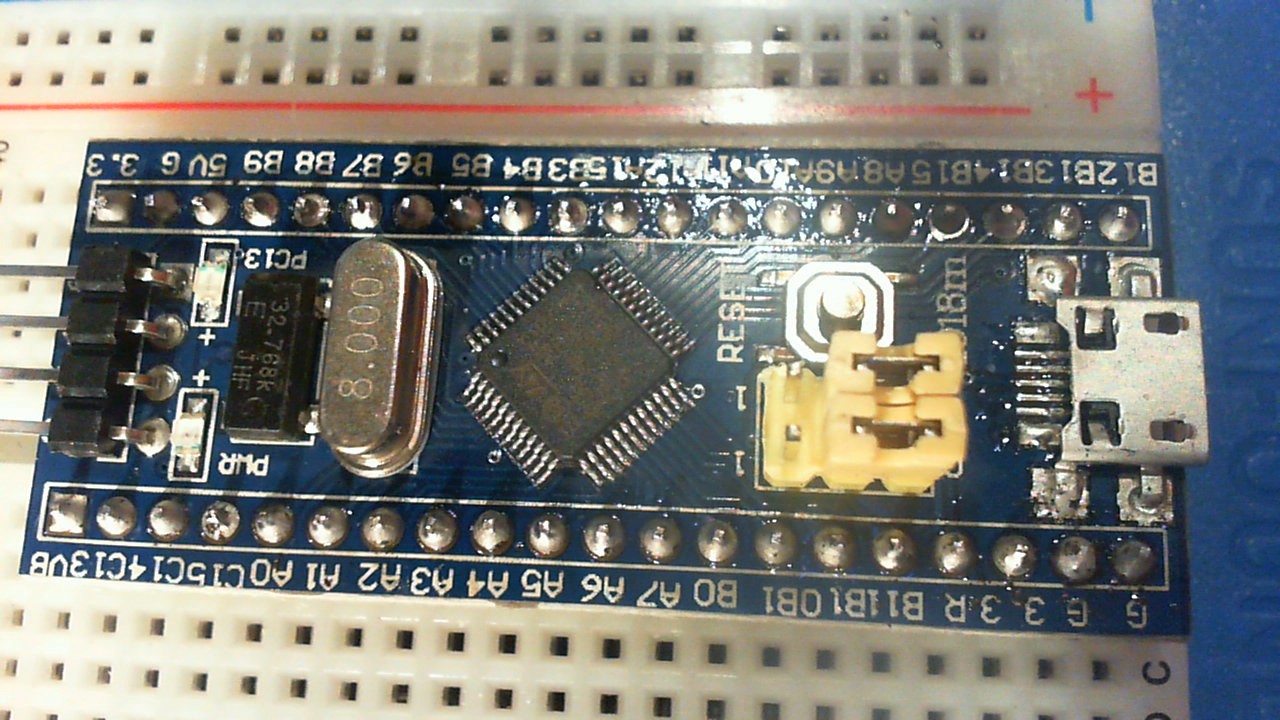 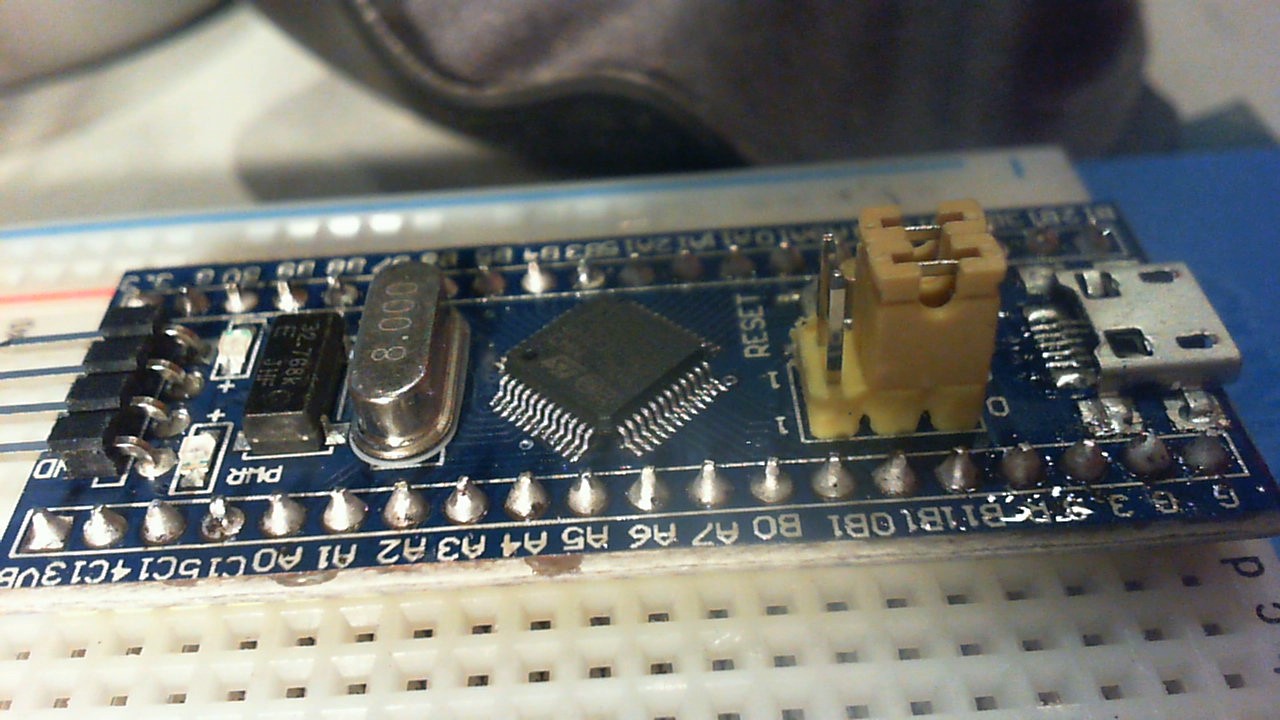 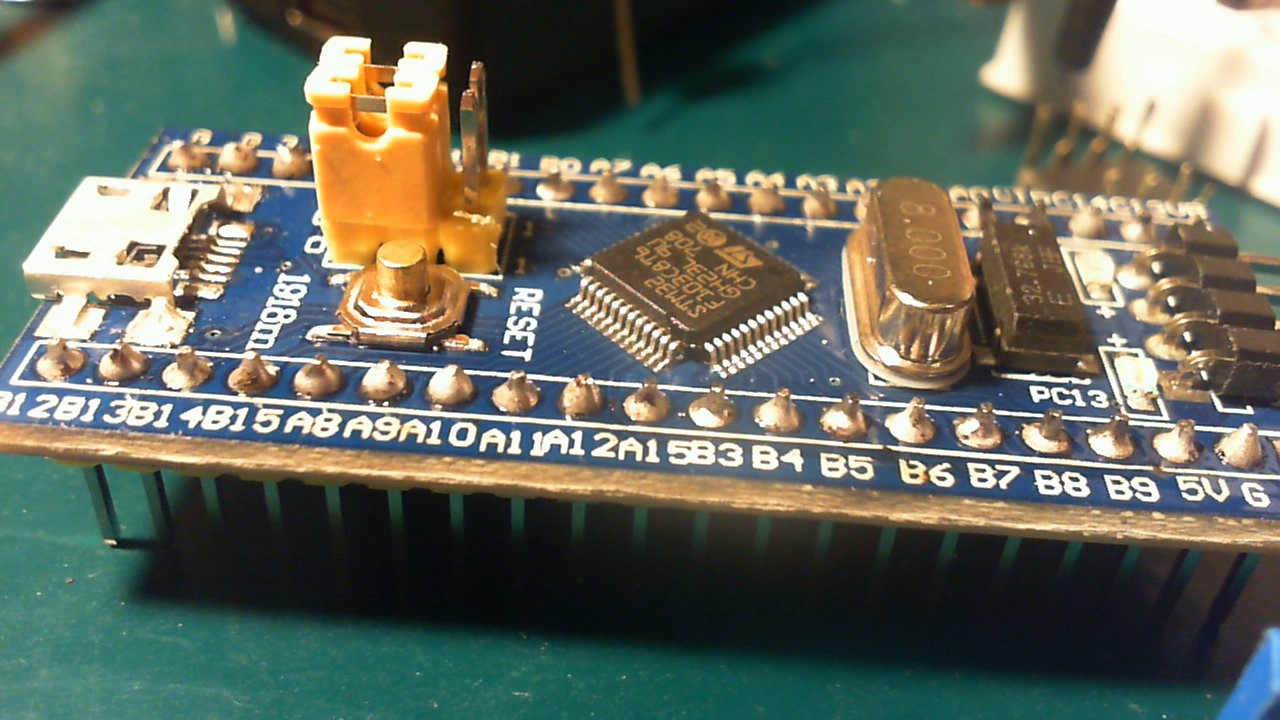 I used a mixture of 50% 96% alcohol and aceton and got the following results: It seems to leave some white residue ... wondering if that is a problem. 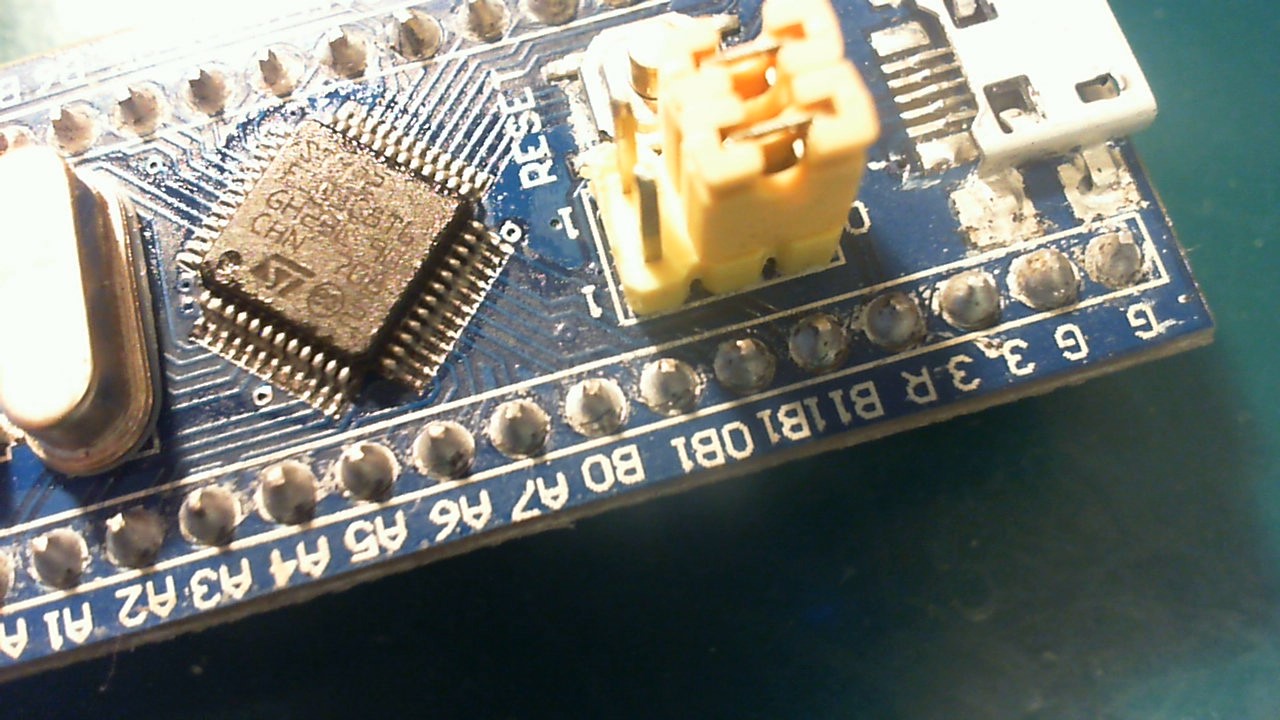 I don't see any obviously bad solder joints on those pictures. However, these pictures aren't great for inspecting the solder joints. To get pictures of small things, you need to use a macro lens, good lighting, and proper exposure.

The main thing to look for is that the solder flowed. That is best seen in the top picture. It seems the solder wetted and flowed on both the pads and the pins, although too much solder is clearly evident on many of the joints. Too much solder makes it hard to tell the difference between a blob that wetted and flowed over the pad, and one that is just sitting on top of the pad with a layer of flux or oxidized solder in between.

The proper procedure for hand soldering such pins is to put the iron in contact with both the pin and the pad. The feed a small amount of solder into a crack between the iron and the pin. The purpose of this little bit of solder is not to make the connection, but to provide good thermal conductivity between the soldering iron and what it's trying to solder.

After a second or two, the pin and pad should be hot enough to melt solder on their own. Feed a bit more solder. This should now melt easily and flow all over the pin and the pad. Remove the iron as soon as the solder has flowed. While the joint is cooling, make sure nothing is wiggling the two parts of the joint relative to each other.

On closer look at the third and fourth pictures, the solder joint for C15 is suspect. At the least, the solder doesn't seem to have flowed over the whole pad.

If you use leaded tin then none of them should look matte. (ROHS tin is another story, such joints tend to look rather bleak even when properly soldered.) This wouldn't pass a professional examination, but might work (for a while) for indoors hobbyist purposes.

Overall looks like you use far too much tin and too little heat, several joints look fishy and "cold". Often the problem is that the pad didn't get enough heat. The iron needs to be placed so that it touches both the pad and the pin. You can let the tin quickly nudge the iron first, only to trigger the wetting. Then apply the tin for the actual joint without touching the iron.

There should be roughly enough tin to cover the hole. For professional use in tough environments, it is good if a bit of tin floats out on each side of the hole (assuming it is through-hole plated which should be the case here), to prevent corrosion over time. However, you don't need to "drown" the whole pin in tin as in those pictures - this might hide poor soldering underneath.

You should strive for something that looks like B3.

You did a fine job there. Those cheap header pins are likely non copper. As such it is best to dial up the temperature a little and out some solder flux on the pins plus the holes before soldering them.

But your soldering is fine.

Whereas the above answers are useful, I don't think they answer the actual question:

How can I best test if all soldering connections are ok?

Even poor solder connections might conduct fine for a while, or even indefinitely if not disturbed. The problem is that you want to have some reassurance that the connections remain good even over changing conditions of thermal expansion/contraction and vibration.

Put the board through a few cycles of heating/cooling through its rated temperature range, all the while applying a low-voltage square wave to each of the pins in question. If you see any interruption or distortion in the output, one of the connections has likely failed. Do the same procedure but rather than temperature variation, run a small motor acoustically coupled to the board, ideally trying multiple different axes of motion.

Edit: if you're trying the acoustically coupled motor, you would also want to test a range of frequencies (rotational speeds) of the motor, because the mechanical properties of the board and the solder connections will vary over this range - from "very low" ~1Hz to the high hundreds of Hz.

Not the answer you're looking for? Browse other questions tagged soldering surface-mount or ask your own question.

11
Why does solder turn dull grey on my iron and exhibit poor wetting?
9
Choice of solder influencing quartz crystal?
1
How to solder under already soldered parts?
9
What are those black spots in these lead-free solder joints?
3
solder iron tip issues
1
Soldering double deck pin headers
0
solder wire makes solid & glassy residue
2
SMD desoldering - struggling to get this chip quik stuff working, what am I doing wrong?
0
How to solder qlpf48 (or how to fix it)?