How to suppress ground loop hum without reducing audio gain?

I added an aux input to my car's factory head unit by soldering wires onto pin 4 (right channel) and pin 33 (left channel) of the M62490FP chip as per the forum instructions. For ground, I soldered a wire to a part of the metal casing, which I suspect is the problem. These wires then go to a female 3.5mm aux input.

Problem is the input is noisy and playing music from a phone while charging from the 12V DC output produces a terrible ground loop hum. To address this, I added a ground loop isolator component between my phone and the chip. This fixes the hum, but kills the gain, making it too soft. Circuit from the forum (except for ground): 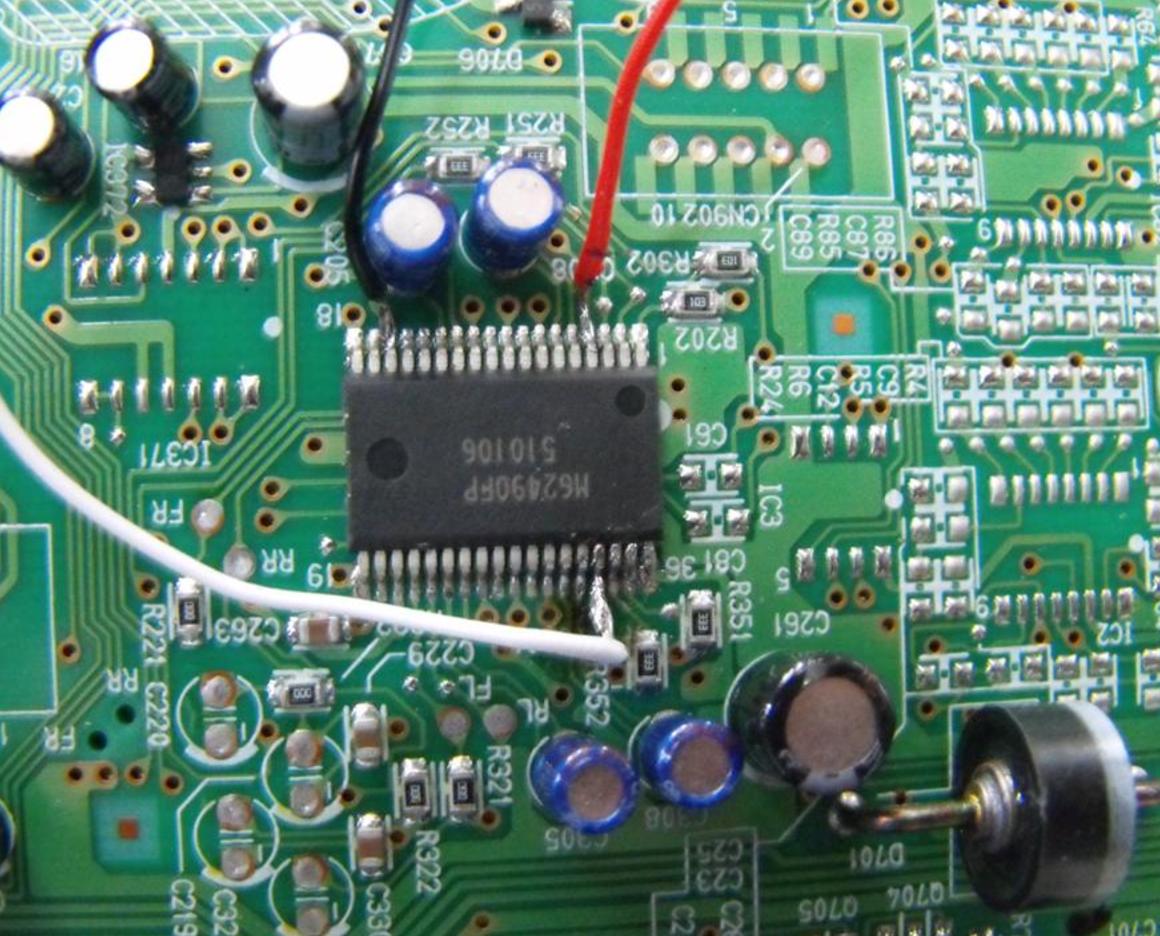 Now I'm stuck with a loud noisy system, or a clean radio that's way too soft. As I understand it, a ground loop is caused by kind of resonance or improper grounding.

Does it matter where on the head unit different components are grounded? To my limited knowledge, it should not matter as long as there is continuity between circuit nodes.

The car is a Subaru Forester 2007. Complication is that I am essentially overriding the CD mode and need a silent audio CD to not interfere with the aux input. Other hobbyists report this working perfectly. 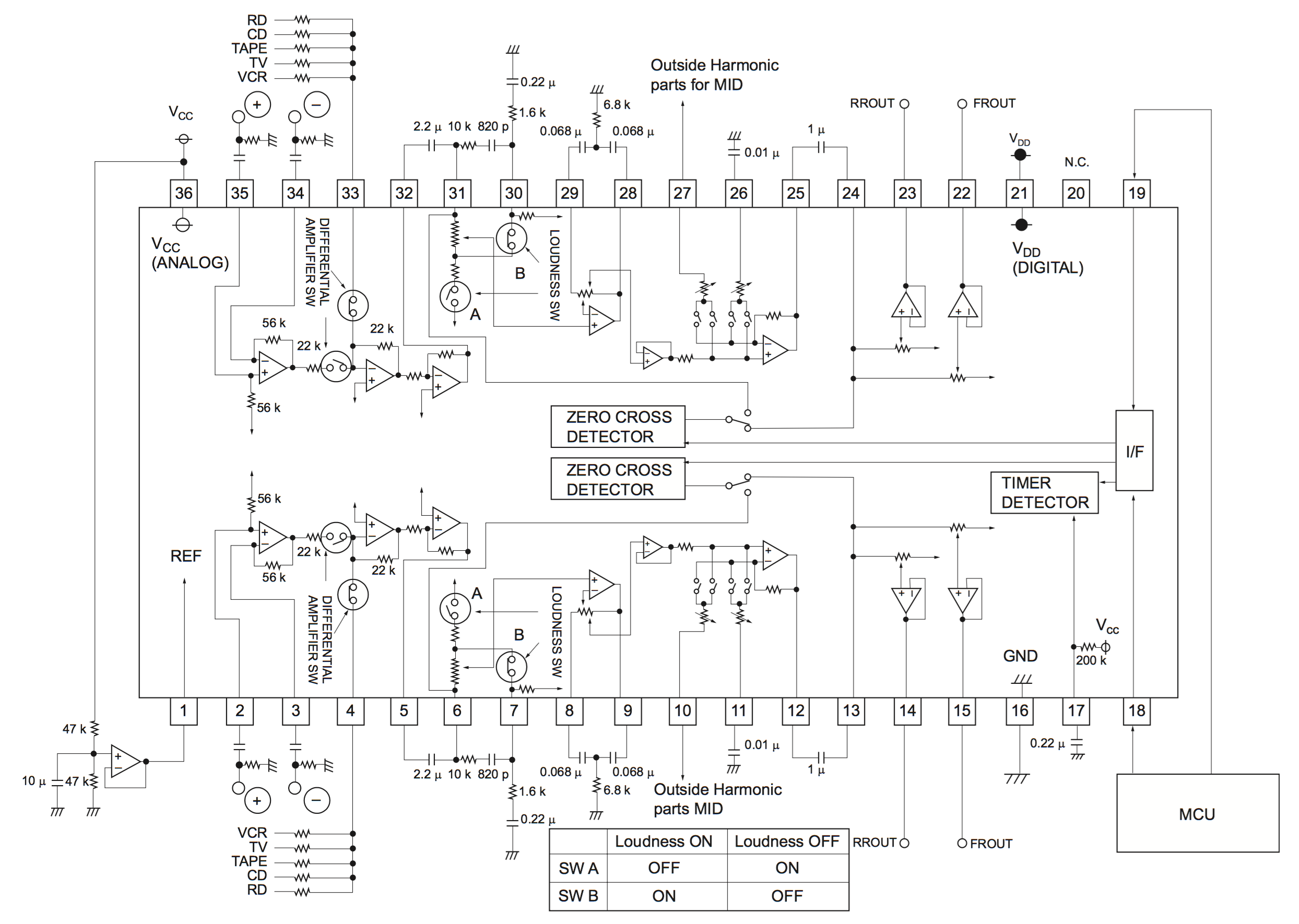 Now I'm stuck with a loud noisy system, or a clean radio that's way too soft. As I understand it, a ground loop is caused by kind of resonance or improper grounding.

That's the reason why you can use the built in differential amp in this IC, the pins are 2, 3, 34 and 35. Connect your L and R signal to the cap of pin 2 and 35, Gnd to cap of pin 3 and 34. These pins seems to connect to somewhere, so be careful when you decided to cut trace to isolate them.

When you plug in your 3.5mm plug and charge at the same time, you should not hear any hum. However do note it needs to be grounded to work and currently it's grounded to the USB Gnd pin. I don't guarantee it to work if you decide not to charge and play. There would be a switch to use the differential amp, that you have to find out how to enable it.

I would try the differential input (34,35 and 2,3), considering that it would ground loop isolate .

The OP's problem may well have been resolved by now, but for anyone following these footsteps:

The way you've hacked an audio input is more likely the problem here than a ground loop (it looks to me like the signal ground is tied to pin 16, which should be fine, just tie your shield to ground at only one point as per normal practice). This thread discusses exactly what I'll suggest below, with pictures too! http://www.scoobymods.com/showthread.php/auxiliary-input-mp3-ipod-subaru-12024.html?t=12024

1) Use a coupling capacitor and series resistor! This does two very important things: impedance matches your new aux input, and remove any DC bias (any bias is very bad for audio!). Removing the DC bias will eliminate quite a lot of the audio problems you described. These components in series with each left&right channel will do a good job here: 2.2k metal film resistor is a good solution (wire wound resistor will do but not as good), and a 470 nF (0.470 uF) film capacitor (polypropylene or polystyrene film). Putting these in series with each channel will make a world of difference! Impedance matching for max power = louder. I know it seems counterintuitive that adding impedance will actually increase the power transfer from input signal to IC, but try it and listen to the difference! It will also make switching from aux input to one of the others a whole lot better (as in, not blowing your speakers/ear drums because you have the aux cranked up to max and just switched to the spice girls CD) Note: Electrolytic capacitor is not a good choice for audio (high ESR, polarized, etc) even though they're easier to find than a film capacitor. It's fun to experiment with electrolytic vs film for the coupling caps and hear the difference, but you won't want the electrolytic for your music! Getting film caps from digikey or mouser should only put you out a few dollars.

2) As Transistor stated above, the other input which is in parallel to your aux input are actively trying to pull your aux input to zero. They do have impedance (as in your schematic posted above), so they can't sink it all but they are likely responsible for some diminished amplitude. This could be solved by using a DPDT switch (or relay, the relays are small and cheap and can fit inside the unit), and selecting one source and only one source at a time. (Double pole because of the left and right channels, and double throw for two inputs to go to a single output). Refer to pictures in the thread linked above. An example would have the common of one pole connected to pin 33 and the other common to pin 4. The NC terminals of the relay could go to either the left/right aux input & the NO terminals to the left/right of the "normal" source (radio, CD, etc, as indicated on the posted diagram). You can grab 12V pos/neg for the relay coil from the big port on the back of the radio (should be easy to solder onto those big leads going down to the PCB). You could switch that power with a small SPST switch led outside to somewhere of your choosing. I would switch the "lowside" (the negative side), because that decreases risk from shorts-to-ground in your switch wiring if it ever gets chafed or damaged, without having to use a fuse or some other measure. Doing this with a DPDT switch instead of relay would require you to run signal wires outside the radio unit to your switch, and they should be shielded. For that reason, the relay is probably the better solution. I'd recommend a through-hole relay small enough to glue right to the PCB (careful of shorts obviously).

So, why don't the other inputs fight each other like this? The cd player and radio don't sink each other's outputs because for example the unit knows that you are in "CD player mode", and takes steps so that the radio input won't compete with the CD player input and vice versa. However, the unit is not aware of the extra aux input - so it doesn't know that it shouldn't be sinking current to maintain a zero. Isolating those inputs from your aux as described will resolve this.

Not the answer you're looking for? Browse other questions tagged audio noise automotive groundloops or ask your own question.