Why do we still use Bipolar Transistors for Class A,B Amplifiers?

I'm working on a 4MHz HF power amplifier (Very simple) and was wondering why people still use bipolar transistors for class B amplifiers?

Do they have better linear current gain etc. vs a FET? Is it because you only need 0.7V above the emitter to conduct so there is minimal crossover distortion (logic level FET could help this)? Is it because "it is how it has been done forever?"

Most of my experience is with Class D and up style amplifiers. Where I mostly just care about operating as a switch and ignore any linear effects. 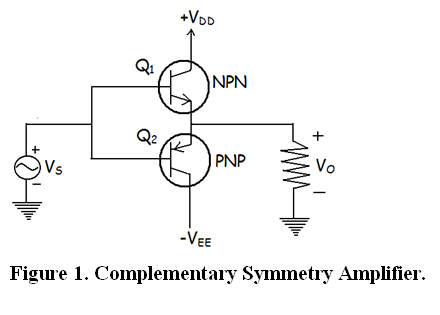 Well.. one is current controlled and the other is voltage controlled.

Another point to make is that it's very easy to open a BJT half-ish, with a MOSFET you got an equation that looks a little bit like this: \$I_{DS}=K×(V_{GS}-V_{TH})^2\$. There's a square in there. For the BJT it's just \$I_{CE}=I_{BE}×\beta\$ (in saturated region). For the MOSFET it means that when the sound goes up, on the output you get the square of that... which is not really what you want, you want to linearly amplify the sound, like the BJT does.

If you however use some feedback then you can make it linear... like using an op-amp. Most modern op-amps, especially those of modest specifications, will be MOSFET-based, if you just make a feedback with resistors then the amplification will be linear, which is what you want, and then it will work nearly identical to the class B amplifier.

This is the schematic of some MOSFET based op-amp. It's too much hassle needed to linearize a class B amplifier. 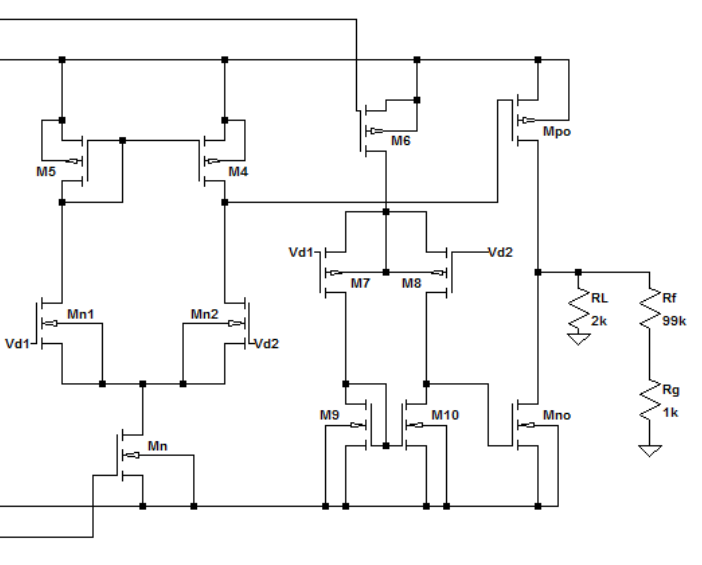 But as you can see, the \$M_{PO}\$ and \$M_{no}\$ forms a class B amplifier stage, there's just so much fuzz in the foreground to linearize it. For an op-amp where everything is in a small package, no problem. All the transistors receive roughly the same \$K\$ since it's all in one batch. If you however need to use all the individual components in packages then there will be some mismatch with the \$K\$'s (in the equation above) because the components were all made in different batches. With different \$K\$ in the above equations, everything will be... mismatched and you'll end up with a dysfunctional op-amp which will make your class B amplifier dysfunctional.

Not the answer you're looking for? Browse other questions tagged transistors amplifier bipolar or ask your own question.

6
Why do Class AB amplifiers use a pair of diodes instead of a resistor?
7
What is the easiest way to reduce quiescent current in a AB power amp?
1
Bipolar class-AB amplifier analysis questions
0
What are the advantages of CMOS operational amplifiers vs bipolar in the same class?
5
Identification of bipolar transistors on die (pnp or npn?)
0
Why bipolar encoding such as AMI is called bipolar?
3
Why are bipolar transistors used for switching applications?