I have a question related to the Rds(on) property of a MOSFET (IRF630N).

Once the MOSFET is turned on (Vgs > Vth) will Rds(on) vary with the increase of Vgs? Or it is not affected by the gate voltage once the MOSFET is on. Will it be affected only by the junction temperature? How is Rds(on) related to the Drain current?

\$R_{DS(ON)}\$ is an important parameter, and many datasheets start with mentioning values for them.
For the FDC885N two values are mentioned in the Features section at the start of the datasheet:

From the same datasheet: 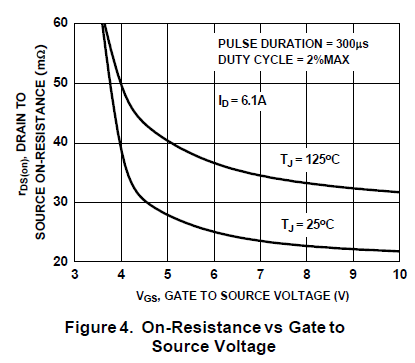 There is no magic gate voltage threshold at which a FET suddenly switches from full off to full on. There is voltage at which a small change in gate voltage causes the most change in channel resistance, and sometimes this is termed the "threshold", but it is still a continuous function.

Look at the datasheet for a MOSFET intended for low gate voltage operation. These are sometimes called logic level FETs. They may have a reasonable on resistance at 3.3 V, but usually a bit better at 5 V, and sometimes they are specified for higher voltages too just so you know what the part can do should you be able to supply higher gate voltage.

For example, the IRLML2502 is guaranteed to not exceed 80 mΩ at 2.5 V on the gate, but is guaranteed to 45 mΩ at 4.5 V. That part is also specified to have a "gate threshold voltage" of 600 mV to 1.2 V, which is not really all that relevant of a spec. It is trying to tell you that the channel won't come on much as long as you hold the gate at 600 mV or less, but since they don't give you actual current or resistance numbers it's not much to design by.

Rds(ON) improves (decreases) with higher gate voltage, even after the FET is ON (but if the gate voltage gets too high, the reliability of the part suffers).

Rds(ON) is insensitive to drain current until you get near the active region of the FET (where it comes out of saturation).

For the IRLML2502 referenced in Olin Lathrop's answer, there are plots of all three characteristics in the datasheet.

There's not much Rdson variation. You can get a sense for how much this changes by looking at the VI curves on your particular MOSFET's datasheet. For example, take a look at the IRFP260N: 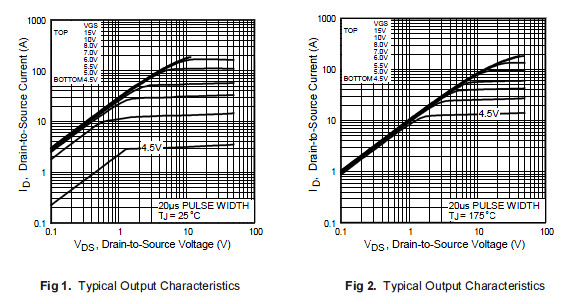 These are the current vs. voltage characteristics for various gate voltages. The IRFP260N has guaranteed Rdson specs for 10Vgs; it's not a logic-level FET and expects 10V to fully turn on.

MOSFETs have two basic operational modes. If you want to operate them as a switch, then you want the current to be low enough so you're operating on the Rdson side of the curve: Vds = Rdson * Id. For a given gate-to-source voltage, there is a current limit above which Vds just shoots upwards because the MOSFET acts like a current sink. This is great for linear amplifiers but bad in power circuits and you usually won't want to operate here.

Will it be affected only by the junction temperature?

Variation vs. junction temperature is fairly predictable and will also be in the datasheet. You typically see a factor of 1.5 - 2.5 increase from 25 C to the maximum operating temperature (150-175 C) and need to plan accordingly.

1
MOSFET sub-threshold operation
5
MOSFET controlled by optocoupler using Arduino
0
Why does drain current stop increasing after a certain value of gate voltage is obtained by a MOSFET?
0
Mosfet based constant current source, and the mosfet gets too hot
0
Mosfet Voltage Gain in common-source configuration
1
MOSFET Rds(on) minimum
0
Does the Rds(on) of a MOSFET vary based on source-drain voltage?
0
MOSFET Gate voltage