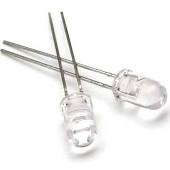 It did not come with specs for the LED. In laymens terms, I'm trying to determine the technical term for the following descriptions.

(What is the max amount of current that can flow through this type of LED before it becomes 'unsafe' and blows up) -- What is this term called?

(What is the minimum amount of current needed to flow through in order to emit any sort of light 'minimum light') -- What is this term called?

rated current is the current level used to determine the lifetime of the led and it's brightness, 20mA is fairly common for that style of LED.

The minimum current before it will show light is forward leakage current.

With modern LEDs in a dark room fractions of a microampere will cause a perceptable glow. so forward leakage current is close enough to zero for most applications, and it is often not quoted on data sheets.

Another parameter lumens per miliampere will tell you how much current will get how much glow. often this is only given at one current level. eg "87 lm @ 20 mA" but this relationship is essentially linear.

Not the answer you're looking for? Browse other questions tagged voltage led current specifications hobbyist or ask your own question.

7
What are the relevant parameters for a reverse-biased LED light sensor?
4
Can an LED driver operate within the whole range between min and max specs effectively, or is a load right at the max specs too large?
2
Calculating LED current flow in a parallel circuit
4
Shortest time to visibly light LED
0
LED glowing a bit even when Transistor is in off condition
4
Understanding current, voltage and resistance
0
Electrical induction at a distance through coils for an LED night light
16
What are the various 'properties' of a diode?
0
Confused with diodes and conventional vs real current flow