I would like to change the direction of rotation of a single phase 240v motor.

Unfortunately there are no markings or instructions with the motor.

Inside the cover, there is a terminal block with U1, U2, V1, V2, W1, W2 connections and the start and run capacitors. From a search on the web, this block configuration seems fairly standard, and I'd hoped changing the direction would be as simple as moving the jumpers from horizontal to vertical - but this makes no difference.

Also there are five wires running to the motor, i thought there would be four for the two coils, but perhaps the fifth has some other purpose?

I stuck a meter over the coils and gave the rotor a spin by hand, thinking I'd see the centrifugal switch cut in on the start side.

On the black pair, the was no change to the conductivity of the wire pair when spinning the rotor.

But on the other side, the three way group, there was a definite break in conductivity when I gave the rotor a spin. The break was three way though, the conductivity was broken between all three wires. I'm more confused than ever now.

Should I have seen the centrifugal switch cut in with a hand spin, or was I seeing something else? 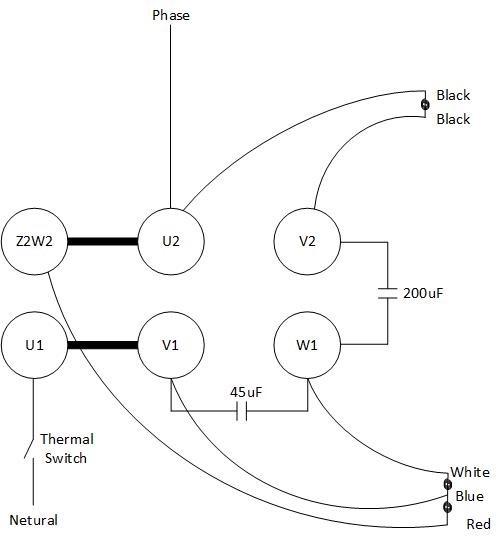 Finally due to trial and error I got this got spinning the other way.

I moved the jumpers shown in the pic from horizontal to vertical and swapped the white and blue wires - I have no idea why this worked!!

Not the answer you're looking for? Browse other questions tagged motor ac single-phase or ask your own question.

1
Identify coils end in 3 phase AC induction motor for star-delta configuration
0
What is the purpose of a relay between a switch and motor?
2
Limit switch on reversing motor
0
How to connect a three-phase motor
0
small AC commutator motor issue
2
How do single phase BLDC motors start in proper direction?
0
welling yxb-250-4 induction motor spin start direction is inconsistent