Loud pop noise while plugging to a headphones jack

I have a Panasonic RX-ES29 boombox with a type C plug (ungrounded). I sometimes hear a relatively loud snap/pop sound in the right speaker of my headphones while I completely plug them into the headphones jack of the boombox when it's on. There's a little buzz when the tip of the jack is inserted but the loud pop comes when the jack is completely inserted. My headphones are Audio Technica ATH-AVC500.

I tried to capture that sound using a male to male cable, but after playing the captured one, it's not as loud as the one I hear by physically connecting headphones to it. You can see the pictures I took from Audacity here and there. 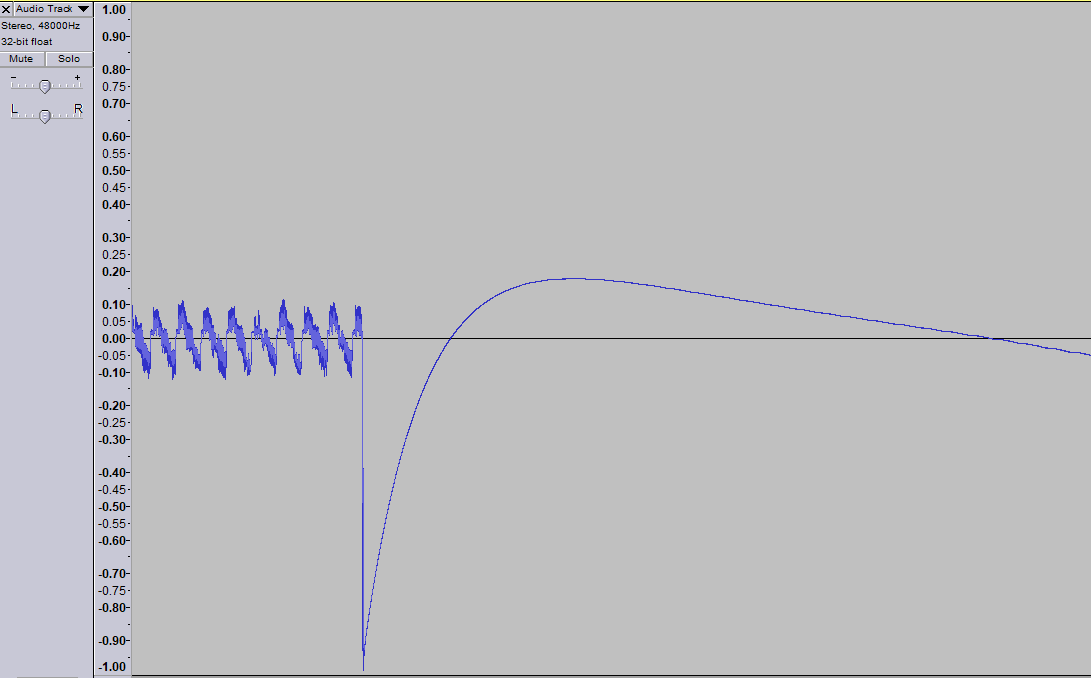 Audacity doesn't detect it as an audio clipping, but it looks like it is by the pictures that I linked above.

One of the strange things about it is that it does not always occur, I mean it's not always there; like sometimes when something discharges near your finger. I tried to unplug and plug several times just after hearing the loud sound but it's gone, exactly like when a charged object is discharged and it needs some time to charge up again.

I'm very curious to know an explanation for this weird behavior.

That's a "DC pop". A sound engineer dies somewhere every time you make one!

Amplifiers fed from a single-rail supply hold their output at 1/2 supply when quiet. If the speaker was connected directly to the amplifier output there would be a DC current flowing through it continuously, heating it up and biasing the cone off centre. It would have limited travel in that direction and, so, would clip and distort much earlier than it should.

By adding a de-coupling capacitor the DC is blocked but the AC can pass through.

If the amplifier is switched on without the speaker connected as shown in Figure 1 the left side of C1 will be pulled to V+/2. The right side will follow suit. When the speaker is plugged in a current will flow to ground until the right side reaches zero volts.

A similar result will occur when plugging an audio source into a device with a DC blocking capacitor on the input.

Note also that if the devices are disconnected while powered up the capacitor may discharge back to power-up conditions due to capacitor leakage or PCB leakage.

As noted in the comments, we can add a discharge resistor to the circuit so that after some delay the right side of C1 has fallen to 0 V. Since this resistor will provide additional loading to the circuit we don't want to make it any lower than necessary.

One approach to finding a solution would be to decide how long we can wait for discharge.

"Exactly like when a charged object is discharged and it needs some time to charge up again."

That is exactly what you are hearing. The output is AC-coupled through a capacitor to the headphones to block any DC component of the signal. With the headphones first unplugged the capacitor had one side open circuit so it stays discharged.

Unplug and plug again, the capacitor retains that charge a long time.

Note the same effect can be heard through the speakers when first turning on an amp if special measures are not taken to limit it.

This can be significantly corrected by adding a largish resistor to ground across the outputs of the amp on the right of the cap.

ADD By the way, the reason you only hear it on one speaker is likely to do with the way jack plugs work. The right speaker is likely attached to the tip of the plug, as such, as you plug it in it first makes contact with the left channel, charging that cap, then makes contact with its own channel charging that, too. By the time the left speaker contact makes its connection, its output capacitor is already charged.

@Transistor is right, however there is a tiny subtlety here...

Jack connectors short everything to ground when you plug them in. When you slide it in, the various metal bits of the jack and the plug make contact in every possible combination before the jack finally settles into position.

I would guess that in this position, both channels are shorted together, and the opamps on both outputs go in and out of short circuit protection, or misbehave in other weird ways that cause this buzz.

When they go into protection, most likely the output goes to ground, so the cap ends up discharged... or maybe they clip to the rail, who knows.

And when the jack slides into place, both opamps come out of protection and snap their outputs to Vcc/2, therefore you hear something loud.

The weird thing is that your pop is the wrong polarity. It should be positive. Either your soundcard inverts polarity, or what I said above is true, and there is some weird clipping/instability going on as the outputs are shorted during insertion.

A common problem I have found with earlier amplifiers is the large DC offset at the headphone jack on amplifier switch on. This was due to the capacitor coupled output stages on amps that only has a single rail for the power amplifier. AS a result the output is floating above ground and has to be blocked by a fairly large value capacitor. Amplifiers like the great Marantz 1060 is one suce amplifier that has destroyed a few headphones of mine in the past including more recently a pair of AKG K550's. The capacitor used to block the DC is fine for the loudspeakers that are anything as low as 4 ohm and rated in the tens of watts. But this DC into a modern fragile headphone voice coil can result in a burnt out driver. The only easy was s mentioned here, is to block the DC post the headphone attenuator with a capacitor of around 220-470uF. At this value there should be very little noticeable low frequency rolloff into a headphone >16 Ohms.

Not the answer you're looking for? Browse other questions tagged audio noise headphones or ask your own question.

2
Analog Switch times for popless audio
0
Quieting headphone pop: Would it work to put a discharge resistor in a custom dongle?

1
What is causing a loud static POP when PTT mic is keyed?
0
How to reduce tape hiss while recording a cassette tape with digital data as source
2
audio jack detection circuit
0
Extremely low volume on headphones after jack repair
0
Quieting headphone pop: Would it work to put a discharge resistor in a custom dongle?
28
I've become an electrical conductor for my headphones… but how?