How can a logic 0 change a logic 1 to logic 0 given these circumstances? 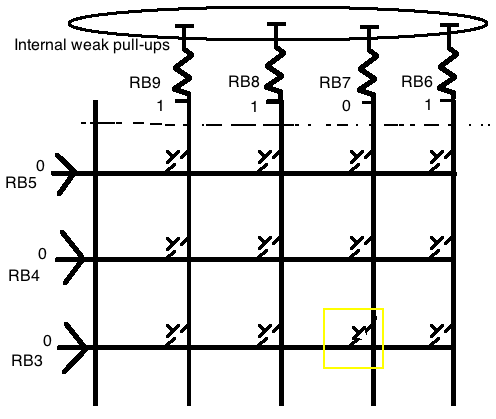 This is a 4x3 numeric keypad. An output RB3, RB4, or RB5 may be connected to an input RB9, RB8, RB7, or RB6 by a pushbutton. The inputs have internal weak pull-ups. When the pushbutton in yellow square is pressed, RB3 and RB7 connect, rendering RB7 logic 0.

I don't know why I am having difficulty understanding this. Unless my understanding of voltage is skewed, I see know way to reverse the order of my way.

Thanks in advance for your help.

The question is not clear. It sounds like you are asking why/how the logic 0 output on RB3 can force the RB7 input to a logic 0 even though it has a weak pull up to a logic 1. The answer is that it is a very weak (large value resistor) pullup intentionally, so that it can be overridden without damage.

I think your comment to AnalogKid's answer explains where you are confused.

Figure 1. (a) It is obvious that a mechanical push-button will beat the pull-up resistor and the input will be pulled to 0 V. (b) It's a little less obvious in the case of a transistor switch but the same logic holds true. In this case the saturation voltage of the transistor when turned fully on will pull down to about 0.2 V.

... which usually falls within a range of voltages causing a flow of electrons declared as logic 0.

Flow of electrons isn't a helpful way of thinking about this. Just think of voltages and currents flowing from positive to negative. This convention was established before the discovery of the electron by J. J. Thompson but it still works for us.

I'm trying to imagine how a 1 can be overridden even with a large value resistor there.

The resistor will be the top half of a voltage divider. It's resistance might be, say 100 kΩ whereas the pull-down by the multiplexing transistor might be 100 Ω. Which will win? The lower value resistor and the resultant voltage at the multiplexor input will be \$ \frac {100k}{100} = 0.1\% \$ of supply. This will definitely read as a logic 0.

A resistor reduces the voltage across all lines in a parallel circuit. Because it is logic 1, a 5V source may turn to 3V which still falls within the logic 1 range.

This is a bit garbled but I think I've explained it above.

Now introduce a smaller voltage. How can 3V turn to .5V? Logic 1 and 0 are based on voltage, right?

This is based on the faulty logic of the previous quote so it is not true. Again, it's who wins: pull-up or pull-down.

Hopefully this will help.

Not the answer you're looking for? Browse other questions tagged pullup or ask your own question.

2
How can I design this pull up without wasting current/performance?
0
How to detect input voltage change on specific pin of atmega32? DC jack sensing
4
How to default logic high after a voltage divider?
0
How to detect pin state change in pulled up pins
0
Misinterpreted explanation in book?
0
How to know the maximum pull up/down resistor of a specific logic pin of an IC?
0
How to evaluate the Logic Compatibility with I2C lines
0
How does a pull up resistor change a voltage divider calculation?