What is the behavior of an unprogrammed MicroController?

Problem: I get Errors when trying to connect to the MicroController using the PDI interface. How does a MicroController behave when it hasn't been programmed? Is there a pin that will toggle to show me it's OK? Kind of a hardware "Hello World"?

I would like a way to confirm if the MicroController has failed or if I've done something else wrong.

I've designed and had manufactured a custom board for an Atmel XMEGA MicroController, ATXMega64D3 to be exact. I'm using the ATXMega192D3 for prototyping, but these chips are identical except Flash/SRAM/EEPROM.

At this point the Power Supply is a verified and stable 3V3 Breadboard Power Supply to all power pins on the MicroController and the Power pins of the PDI connector. I have most of the decoupling Caps recommended in AVR1012: XMEGA A Schematic Checklist, section 2.1. I placed jumpers instead of the inductors & beads specified, and have not installed the electrolytic capacitors.

The MicroController is a 64-pin TQFP which I soldered on by hand under 7-14x Magnification. Then inspected for solder bridges.

I live in the Seattle area and it's been raining, I'm a native so I haven't turned the heater on. Odds of static damage are very low.

Programmer is an AVR Dragon, using the latest (non-beta) of Atmel Studio 6.0. Which reads the boards power level correctly but can't actually communicate with the MicroController.

I checked my design and the PDI Clock trace is 15mm long and the PDI Data trace is 25mm long, is this enough of a difference to cause Sync Issues? I would like a way to confirm this before going through the time and money of having a new board made.

Thank you for any help or ideas.

Update Still not working, but I have found and fixed the following issues.

At this time my theory is the AVR Dragon is my issue. The documentation states that the Dragon can connect to XMega with PDI but I have found multiple comments that seem to show about a 30% success rate, depending on the XMega model.

As an FYI with Power applied, the non-power pins read between 50mV and 300mV. Once again this is an un-programmed uC so there isn't any code running. This could be a leakage voltage or it could be the default configuration of the pins I'm not sure.

Using the AVR JTAG ICE 3 programmer it showed up, read the signature and fuses perfectly.

My next step would be to install the electrolytic capacitors as recommended in the Schematic Checklist you mentioned. If it still doesn't work, I would go ahead and install all the inductors, etc. recommended in the checklist -- maybe there is a reason Atmel published that checklist :-).

If it still doesn't work, I would fall back on the sorts of errors I often make:

With most digital electronics, even if the PCB is known to be incorrect, it's usually quicker and easier to cut traces and add jumper wires on the prototype until you at least get to the "blink an LED" stage than to wait for another PCB to be fabbed that has fewer problems with it.

10 mm extra trace length is irrelevant in this application. I'm almost certain that is not the problem.

After I've exhaustively made sure that everything is connected properly, as recommended by the manufacturer, and there's no shorts between adjacent traces, and the program still doesn't "recognize" the chip, only then would I conclude the chip is a dud and get a replacement chip.

Later, after you get the programmer to "recognize" the chip and start to program it, then you can think about:

Is there a pin that will toggle to show me it's OK? Kind of a hardware "Hello World"?

Yes. Blinking an LED is considered the equivalent of "Hello World" in electronics. a b c d This doesn't happen automatically, though -- you need to connect a pin to an LED and you need to write some code to blink it.

Even after a person programs the other pins to do useful things, they often leave the code in to blink a "heartbeat" LED a b that once a second or so. That makes it pretty much instant to confirm that the program is loaded and running, the right frequency of crystal is connected, etc. (Some people deliberately change the blink rate every time they reprogram the chip, just to reassure themselves that the chip is now running with the latest code rather than the old code).

Unprogrammed microcontrollers are sometimes erased so that all of program memory reads 0xFF. What happens if you run this depends on your controller. Some controllers have 0xFF as machine code for a NOP, so that the controller doesn't do weird things if unexpectedly would see a block of unprogrammed or unexisting Flash. The program counter will run through it until it reaches 0xFFFF, wrap around to 0x0000 to arrive at the reset vector. This depends on your controller. If it's erased you won't see anything happen. If 0xFF would be the code for another instruction anything may happen, but it would be very lucky to see activity on I/O pins.

They also may contain a test program used in production. You can disassemble it if you really want to know what it does, my guess is that it will execute an algorithm involving as many as possible different instructions and activate some output when the algorithm is executed correctly (other I/O will also be used in the process).

Also possible that it hasn't been erased and that it contains garbage. I've never had controllers like that.

The general question of "What is the behavior of an unprogrammed MicroController?"

Answer With power applied, the non-power pins read between 50mV and 300mV. Once again this is an un-programmed uC so there isn't any code running. This could be a leakage voltage or it could be the default configuration of the pins I'm not sure.

My specific situation was resolved by using the AVR JTAG ICE 3 programmer, the MicroController was detected and it read the signature and fuses perfectly. While the AVR Dragon may technically support PDI, it may need additional pull-up/pull-down resistors or have other circuit requirements to work as expected.

There are many great suggestions here, so read them all if you are experiencing the same problem.

Also note: http://www.atmel.no/webdoc/atmelstudio/supported.devices.notes.1.html Up to Revision K of the A3/D3 Xmega's are not supported by AVR Dragon. (8-17-2012)

XMEGA PDI issues: XMEGA PDI mode on AVR Dragon does NOT work for the following XMEGA devices: A3/D3 - revisions B, C and E or A1 (up to revision K)

The PDI interface is a synchronous half-duplex UART interface. The two lines, PDI_DATA and PDI_CLK, must therefore be balanced. If you place a strong pull-up and decoupling cap on the PDI_CLK, which is also the Reset line, the clock and data will no longer be synchronized correctly. Therefore, during development you should remove any pull-up and decoupling capacitors. This also applies if using the PDI interface for in-system programming the XMEGA in production.

Also have you wired the device to the programming header per this picture? 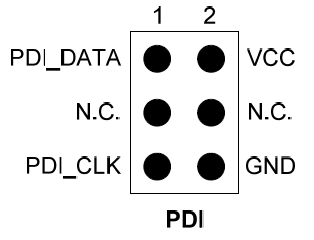 The pdi interface puts the microcontroller in reset, so unprogrammed or programmed, once you yank reset it doesnt matter. If you had the part in backwards you could have fried it or other things including your programmer, so everything is suspect at this point.

the pdi protocol, at least on the xmega (atmel may have two different ones both called pdi) I programmed, definitely has timing restrictions on the clock, your wire/trace lengths are likely not a problem. But if you pause too long on a clock cycle the part automatically goes out of programming mode and you have to start all over. there is a init sequence that has to happen. for example if you read a memory/flash location then stop to print it out, then go back, you may have taken to long and have to re-init. it is not hard at all to bit bang xmega pdi, have you tried that instead of using some other programmer that tries to be a one size fits all (which never fits anyone well)?

Not the answer you're looking for? Browse other questions tagged microcontroller avr pcb-design atmel xmega or ask your own question.

4
Reading a pin as an input on AVR XMEGAs
0
XMega not responding PDI/avrdude
1
ATMega32 USBasp not programming
0
AVR microcontroller test problem
1
Atmel ICE SAM connector pinout does not reflect the real pinout
0
Atmega128 ISP programming, unable to read device ID
0
Should the PLL pins be decoupled on an MCU?
1
Programming an AVR microcontroller with multiple SPI channels
1
Estimating the frequency at which your microcontroller is running