How does a bi-directional electricity meter know import from export?

I've searched everywhere for this but can't find the answer...

Its possible to have 3 phase electricity meters that measure both imported and exported kwh with each value being recorded in separate registers.

How does the meter differentiate between imported and exported energy? Doesn't it just see voltage and current going up and down?

Voltage and current waveforms have an amplitude but they also have a phase relationship: -

The left picture shows voltage and current waveforms in phase i.e. they rise and fall together. The right hand picture illustrates a phase lag on the current.

The red curves for both is power and even though the amplitudes of voltage and current are the same in both pictures, the average power in the right hand picture (what you are billed on) is lower.

The left picture shows current lagging voltage by 90 degrees and the average power is zero (there are equal amounts of power taken from the supply as given back to the supply). The right picture shows a negative average power because the current's phase angle has moved to a point where it is generally inverted i.e. it's positive peaks are closer to the inverted voltage waveform's negative peaks. This is an example where power is flowing out from a "user" and back into the power grid.

How does the meter differentiate between imported and exported energy?

Pictures taken from here and here.

The above explanation is for a single phase but the same applies to 3 phase systems.

Found a perfect illustration from an experiment. This trace shows two voltage sources connected via a resistor - one (call it Va) fixed at 170V the other (Vb) increasing from about 75V up to 250V. Both voltages are in-phase. On the left hand side current is in-phase with voltage (lets call it import), When both voltages are 170V there is no net flow and then as Vb increases the current phase shifts to exactly 180 deg (call that export). Voltage is the green line and current is blue. 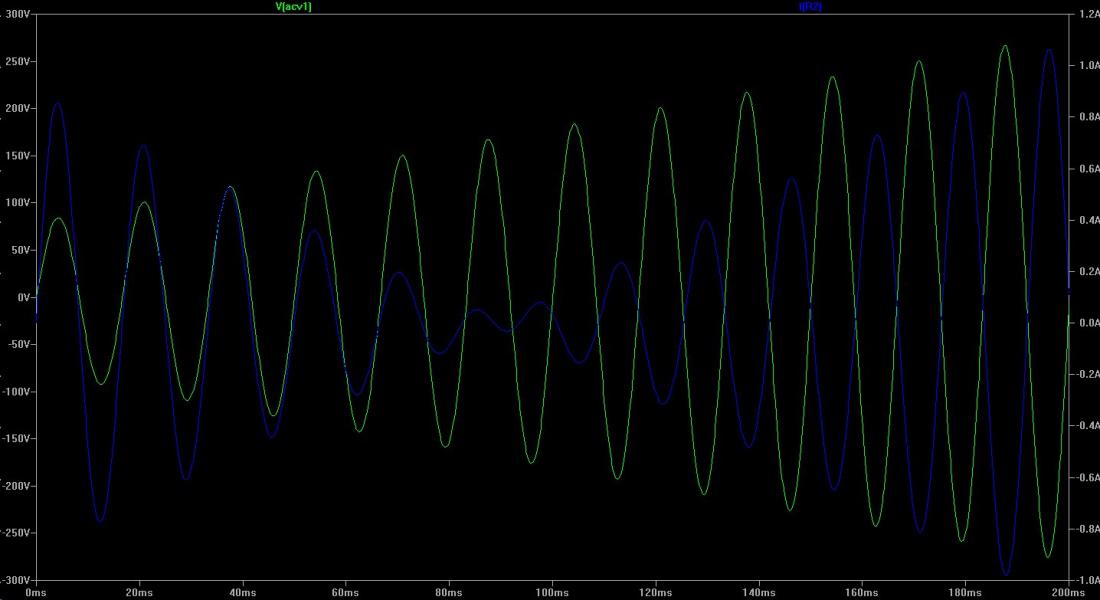 The main thing you're missing is that the phase of the current relative to the voltage is important. Just the RMS voltage and RMS current alone can't tell you which way power is being transferred, if any at all.

The instantaneous power being transferred is the instantaneous voltage times current. Note that both of those are signed quantities. If the voltage and current have the same polarity, then the power is positive. If they differ, it is negative.

The accumulated transferred energy is the time-integral of the above. This is what electric meters measure.

Old meters did the integration by putting the voltage and current on two separate coils that effectively were the rotor and stator of a motor. The mechanical movement averaged the instantaneous power thru inertia. The total energy was accumulated by keeping track of the total number of revolutions of the motor. This was done with gears so that there were a series of dials that each moved 1/10 the speed of the previous. This allowed for reading out the energy value as decimal digits.

Modern meters measure the voltage and current many times per second. These two are multiplied and the result digitally accumulated. Readings are taken 100s to 1000s of times per power line cycle so that the system doesn't get confused by harmonics.

Doesn't it just see voltage and current going up and down?

When current is in phase with the voltage (as when a battery supplies a load), then the meter knows the power is being imported.

When current is out of phase with the voltage (as when a battery is being charged from a supply), then the meter knows the power is being exported.

2
What's the most economical way to digitally measure 240V mains voltage, current and power factor?
0
Can Average Power of a 3-Phase AC motor be calculated from Mean Current & Voltage RMS from each winding?

3
What is "transformer connected" vs. "direct connected" for a electricity meter?
2
How to amplify the signal of a TCRT5000 phototransistor
1
Poor power factor value through energy meter on maximum solar power exported to grid
0
Energy Meter energy calculation from power
0
Need help interpreting a Energy Meter datasheet
0
What is the 'right' way for a 3-Phase Watt Meter to determine import-export Watt-hours?
0
How Power measured by Meters is affected by Harmonics?
1
2-wire vs. 3-wire watt-hour meter?