I have been having problems with 2N7000 mosfets that perform perfectly on the breadboard, but when moved to a perfboard start failing. I'm on my third iteration now, replacing all mosfets, between iterations having eliminated possible other sources for failure. On my third attempt I've been probing each separate mosfet for shorts and testing them with the uC between soldering the next. After soldering the third of eight in total, all three suddenly failed. This time they failed having not a shorted gate-drain, as before, but turning the gate ON/OFF has no effect, current now always flows from Drain to Source. I'm quite desperate at this point. :(

My setup is as follows: A microcontroller* provides 0/5 volt to the gate of the mosfet (100ohm resistor on that). On the Drain, there's the LED with a current limiting resistor. Source is connected to ground. Basically there are no other components. 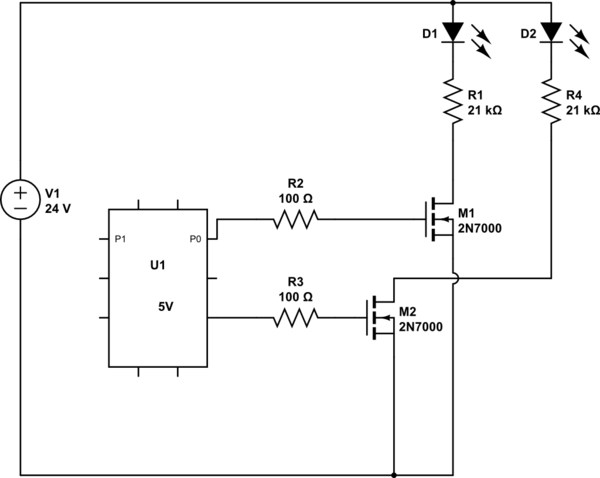 Since everything is OK on the breadboard, and things start failing after soldering, but never after the first mosfet. I'm fairly confident that something goes wrong during soldering. What could I possibly do wrong here?

EDIT: I verified that the wall socket is actually grounded.

UPDATE: I decreased temperature to 250C, no luck. I'm fairly sure that I'm not a source of ESD as I'm grounding myself throughout the soldering process, before and after. My suspicion is now on the cheap (but grounded) soldering iron. I'm going to replace it with a soldering station soon, hope that helps. Any additional insights/tips are welcome, I'll keep monitoring this topic and post new findings when the soldering station is in. I may also get some ESD workplace stuff like a strap, I have still to check what's available in this department.

What kind of soldering iron are you using?

If you use a soldering iron powered directly from mains, instead of a proper soldering station, its tip will be connected, for safety reasons, to the earth ground of the electrical system of your building.

Although MOSFETs like 2N7000 are fairly rugged, compared to discrete parts of 20 years ago, they might get damaged by phantom voltages coming from the ground connection of your electrical system.

I bet you overheat it with to low of a temperature forcing you to apply the heat for a longer time. I use 370C and you just have to quickly touch the pad, pin and solder so the heat doesnt transfer upp into the casing when soldering small lite fragile components like this. You can't blast it with several seconds of heating. If you use led free solder the situation becomes even worse.

Another viewpoint. Does your uController's output pin have a pull-down capability and are you using it? If not the Mosfet's gate capacitance (that holds it on) may not be bled away and the Drain to Source connection remains intact. You may try placing a high value resistor (10K or more) from the gate to ground to force the Mosfet gate capacitance to drain when you want to shut it off from the uController's pin.

Excuse me for my English.

Although this thread is old but I want to mention something that may help someone with similar problem. I had similar problem with current flows from source to drain when gate voltage was 0V on IRLML2502 and I solved the problem by disconnecting the soldering iron from main socket during soldering the transistor. This problem is observed only with infineon manufactured mosfet and not others like IOR ,that was very odd to me!!

#3 is something that people don't realize is a problem and don't leave enough time between rework and operation. The operating temperature is usually in the 90C to 125C for most parts, and the part can get well above 120C during rework.

1
Why won't my MOSFET work?
2
gate current direction during turn-ON of P-channel mosfet
0
N-Channel MOSFET as 12 VDC switch
0
Why does drain current stop increasing after a certain value of gate voltage is obtained by a MOSFET?
2
ESD sensitivity of MOSFET pins
0
Desoldering a TO-220 MOSFET from a plated through-hole board with SMD complications
1
How can I protect my MOSFET?
3
Why does the signal MOSFET keep failing in this circuit?