I am confused as to how the following circuit will work(????) 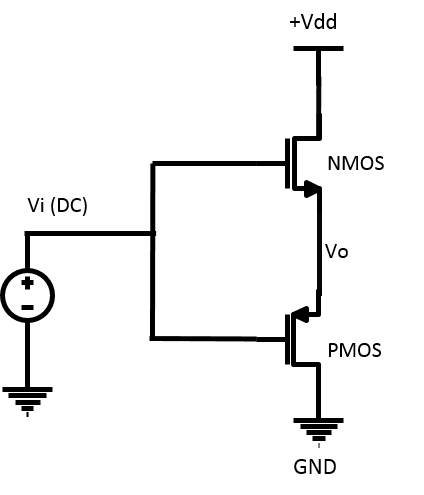 Lets assume that there is no AC signal and only a DC signal is applied.

EDIT: I will try to explain what i think should happen. For the circuit exactly as described in the picture (no load condition and only DC condition)

According to the books this is a voltage follower stage i.e Vo will be equal to Vi

No, Vo will never attain the level of Vi because of loading effects on the output and the need to exceed the gate threshold voltages to be able to turn on (to any reasonable extent) either transistor.

So, if Vi is 5 volts p-p and the power rail is 5 volts, then I would expect to see maybe 4 to 4.5 volts p-p coming out in no load conditions. Why not 5 volts p-p you might ask - the transistor that is "off" will still draw several nano amps and have capacitance from drain the source and this means real current has to pass through the "on" transistor to deal with the loading effect of the "off" transistor. This means the source cannot truly follow the gate without some volt drop.

To better understand this circuit get rid of the P channel MOSFET and replace it with a resistor to form a source follower amplifier - gain is somewhat less than 1 and this is the same basic problem that is faced in the push-pull version (but it is slightly improved in no-load scenarios).

Let's look at a BJT version, and I'll also include a load on the output:

Now does it make more sense?

When the input voltage is higher than ground (or whatever the load terminates to), then the b-e junction of Q1 will be forward biased, and Q1 will conduct into the load. At the same time, Q2's b-e will be reverse biased, so Q2 will be in cut off.

When the input voltage is below ground (or whatever the load terminates to), Q2 will be forward active and Q1 will be cut off.

There will be a small region, when the input is within about 0.6 or 0.7 V of ground, where neither Q1 nor Q2 will be turned on, and this will cause the infamous cross-over distortion that we usually talk about when we discuss this circuit.

The MOSFET version you presented will work the same, but because a typical MOSFET Vgs(th) is higher than Vbe(on) of a BJT, the cross-over distortion region will be much wider.

In a single-supply circuit like yours, if the load terminates to ground there is no need to include Q2 (or the PMOS in your circuit), since only Q1 will ever be active. But if you have a load that terminates to an intermediate voltage (or you bias the output there and capacitively couple to the actual load), it could make sense to use this design in a single supply environment

For the circuit exactly as described in the picture (no load condition and only DC condition) ...

You can't count on this. Some static charge will likely accumulate on the gate node and drive it upredictably high or low. You should always connect CMOS gates to a known potential.

In the rest of your analysis, you are neglecting that there will be leakage currents through the FET channels and body diodes, so the output voltage will never be truly floating.

Therefore, your expectation that "Vo_floating = exactly 0 Volts" is very unlikely. More likely it will tend toward some voltage near (within a few volts of) Vdd/2. The value will likely change with temperature, passing air currents, etc.

But really, why would you want to use this circuit with no load attached? The whole point of the design is to be able to source or sink relatively large currents into (or out of) a load.

Not the answer you're looking for? Browse other questions tagged mosfet basic push-pull or ask your own question.