Why do LEDs have only RGB (Red, Green, Blue) colors why not others? [duplicate]

After some studies I've found LEDs having 3 colors RGB (Red, Green and Blue), I was very interested in this topic so this question is up. The Diagram will tell the colors in LEDs. 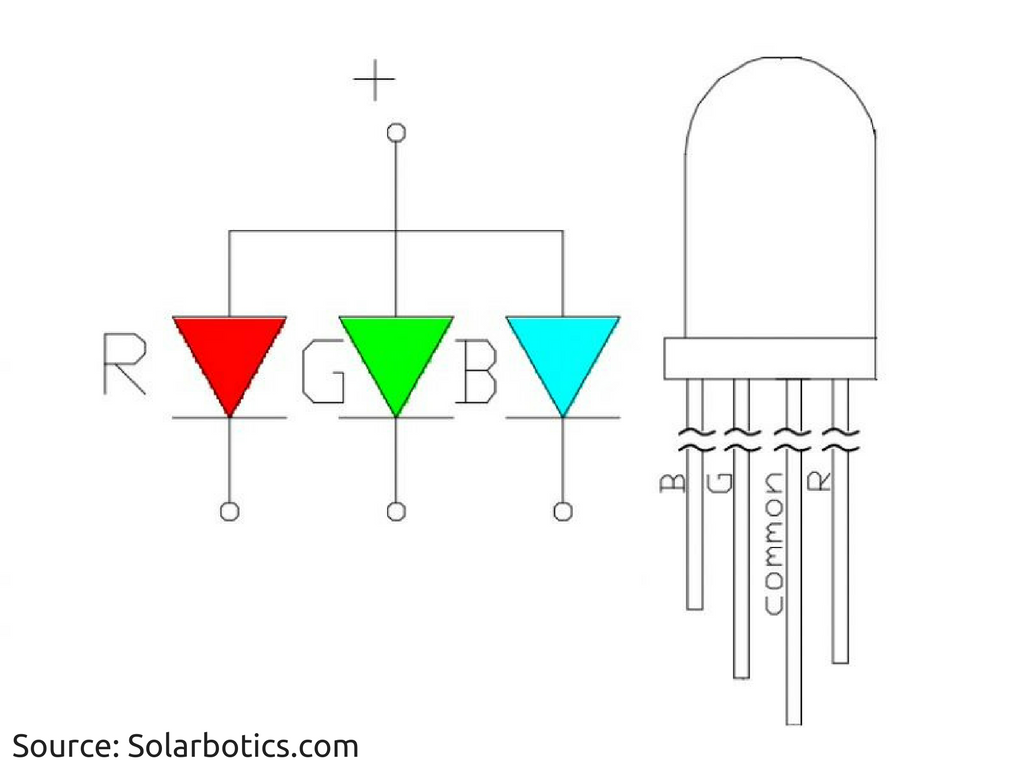 Why only RGB is needed?

Why can't any other color be replaced?

Why MCY Cannot be used?

LEDS actually come in all colours.

However, what we as humans call colour is dictated by the fact that the cones in the human eye are only actually sensitive to three primary groups of wavelengths which we call red, green, and blue.

Different LED technologies produce light in a similar but narrower bell curves around a particular wavelength. When we look at them the cones are excited by the wavelengths present and the brain interprets the mixture of excitement as the intermediate colours. The colours that match the cone frequencies are obviously the brightest LEDS. 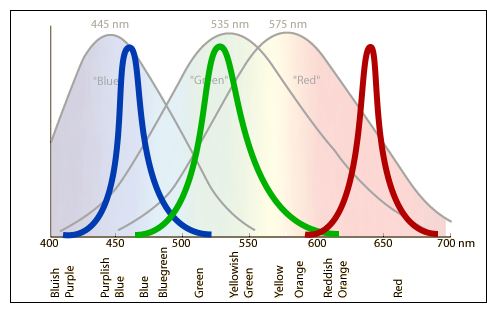 Notice normal red LEDs are actually off quite a bit from the cone. As such red LEDS are actually a lot brighter than they appear to be.

What that means is that having more LEDs of other colours gives you a limited return since all you need to do is excite the cones in the eye using the appropriate amounts of the three "primary colours" it is sensitive to.

Interestingly, to other sighted animals, colours look quite different. Even you and I will have genetic differences in how we perceive each colour.

As others have mentioned in the comments the above description which is widely used is in fact a little too simplified.

Because of the wide bell curve shape of the cone sensitivity the pure RGB excitation method does not work quite as described. For example, notice the "red" cones actually peak out somewhere around yellow-orange. The brain actually interprets red as some excitation on the red cone and no excitation on the green cone. Green on the other hand has equal excitation of blue and red.

In other words, the primary colour model is just not quite that simple.

Adding more colours will in fact produce more detectable hues to the brain. This is why RGBY produces quite a noticeable difference. If you look at the second colour chart you will notice a bigger gap between the red and green than the green and blue. A yellow, or amber LED, fills that gap and produces many more detectable hues with no blue component.

Ultimately, a LED that can produce every wavelength that the subject was illuminated with would be required to produce a 100% natural image. However the costs, both of the display LEDS and the capture and transmission mechanisms becomes an issue.

Fortunately, the colours and image quality that can be produced using a simple mixture of RGB does cover a sufficiently wide gambit of human detectible colours to be satisfactory for most cases.

Single LEDs come in orange, yellow, amber, infrared, ultraviolet, cold white, warm white and many other colors/hues. Therefore I assume you mean to ask why multicolor LEDs are typically red, green and blue.

The answer lies in how colors are mixed.

Additive color is color created by mixing a number of different light colors, with shades of red, green, and blue being the most common primary colors used in additive color system.

This stands in contrast to subtractive color mixing, where cyan, magenta yellow and optionally black - CMY(K) - is commonly used in printers etc.

A subtractive color model explains the mixing of a limited set of dyes, inks, paint pigments or natural colorants to create a wider range of colors, each the result of partially or completely subtracting (that is, absorbing) some wavelengths of light and not others. The color that a surface displays depends on which parts of the visible spectrum are not absorbed and therefore remain visible.

Naturally, LEDs work with light, so additive color mixing is the most effective and the prefered method.

With RGB you can mix a lot of different colors using only three LEDs in one package or device.

It is of course possible to use other color combinations than RGB, but that will most likely increase the cost, and/or decrease the gamut and therefore the general usefulness of the light.

It's not true to say these are the only LED colours available. However. I suspect you are talking about colour mixing. By altering the intensity of the three [RGB] LEDs you can produce any colour under the sun. This is commonly done by driving LEDs with PWM signals.

CMY(K) can be used to make any colour too, but, you can't get [pure] cyan and magenta LEDs and these colours are used for subtractive rather than additive colour mixing.

LEDs such as white are made with an blue LED and a phosphorous coating. Cyan and magenta by having multiple die within a package, so you're already colour mixing here.

Not the answer you're looking for? Browse other questions tagged rgb or ask your own question.

23
Why are there only RGB and RGBW-LEDs, but none with more chips inside one housing?

6
RGB LED - Set intensity on Red and Blue
4
LDR + RGB Led = Color sensor. How to calibrate it?
29
Why are the three component LEDs in an RGB LED so unbalanced?
4
How can I stop the flicker of LEDs?
1
How to map RGB LED to wavelengths?
2
Why is my RGB LED strip passing current through the transistor?
1
RGB led weird color behaviour (blue except when touched to skin)
1
How do I interpret an RGB LED max amperage given as a range e.g. 30mA-70mA?
1
Why can the IS31FL3731 only handle 32 RGB Leds when it can handle 144 Regular ones?