Why battery chargers take a pair of batteries and not one?

I have a number of AA- and AAA-sized NiMH rechargeable batteries ('accumulators'). All the chargers I encountered allow to charge 2 (4, 6, 8,..) such batteries at a time, but never a single battery.

Is there a good engineering reason for this?

There is no overwhelmingly good reason to charge cells in pairs, and while many cheaper multi-cell chargers do charge in pairs, not all chargers do this.
They are probably doing it to save cost.
It means they can use higher voltage and lower current and they may be able to simplify the charge circuitry somewhat, as they have halved the number of "batteries" being charged by making each battery consist of two cells.

The very capable (and 'nice' :-)) "Powerex Maha MH-C9000" charger charges 4 x AA or AAA cells completely independently - cells can be charging or discharging or resting and the charger can be programmed to perform test cycles or "reconditioning" cycles and more. This is an excellent example of what a charger can achieve when absolute minimum cost is not the main driver. 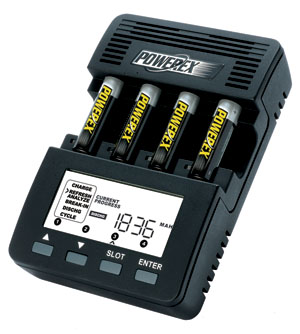 At about $70 here (price varies with seller) this is a very expensive charger compared to most - and also very good value for money if you use AA rechargeable cells extensively.

The term "battery" is often taken to mean a single item that is handled and installed as a single unit. So people may refer to an AA battery or AAA battery OR a 9 volt PP3 transistor battery. More properly the word cell means a single chemical device for producing electrical energy and a battery is a collection of these.

Battery - 1 or more cells connected together (usually in series) to provide an energy source.

Accumulator - as used in question = cell. As used for cars and similar, usually means a number of cells in a common housing.

I've not seen it done (but it may be) but a relatively simple circuit per cell would allow you to charge NimH cells in a series string with little or no ill effects.

Across each NimH cell place a 1.45 Volt shunt (or clamp) regulator. For extra points temperature compensate it, but the difference is small enough to be bearable in most cases. Circuit below - Vout goes nowhere. Battery connects across two rails. Circuit bypasses current when Vbattery reaches present level. Cost at one off levels is $0.50 - $1.00 worst case per cell. Component cost in manufacturing volumes is 5 to 10 cents per cell.

Two diodes would be cheaper but have a far less sharp "knee" and would not be programmable. TL431, R1, R2 could be replaced by a zener but cutoff knee would be very soft. 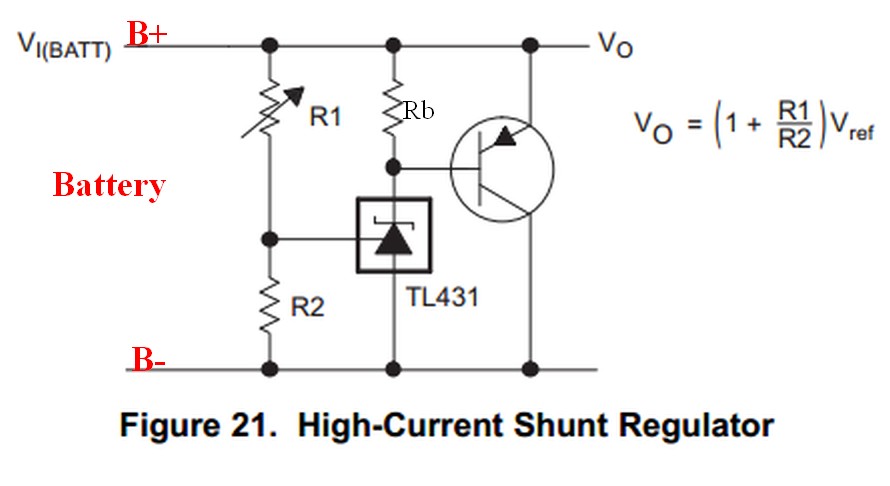 Charging batteries in series is not good for the batteries, because even identical batteries age a little bit differently and charging them in series means you may be always overcharging one battery and undercharging another.

5
Charge a single AA battery in a double charger?
0
Recharge Battery with Multiple Chargers
6
Why rechargeable batteries use 1.2V
3
What does it mean that NiMH batteries do not have a “float voltage”?
0
Charging batteries and how voltage affects it
1
Why are there no decent 9V block chargers?
0
Redundant Battery and Chargers Behaviour