Internal clamping circuit at the input pins of an MCU

And why is it called clamping? I've read that a basic clamper circuit essentially contains a diode, resistor and capacitor. But in the microcontroller case, there is no capacitor, so why is called a clamping circuit?

Is it a clipper circuit maybe? I've just had this confusion for a while, so could anyone please explain this and clear my doubts? 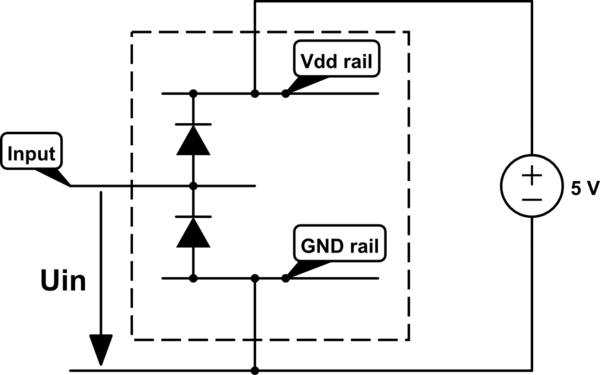 It's called clamping because the diodes makes the input pin cling to the supply rails.

The "basic clamping circuit" you describe has nothing to do with this. That one limits an AC input to ±0.7V by using antiparallel diodes.

"Clip" normally refers to analog output reaching saturation, which could also be used for and output feeding an input stage when diodes saturate, but normally used for analog output situations not ESD event inputs.

"Clamp" refers to semiconductor in forward conduction or diode or Vce saturation mode to limit voltage change when references to any supply rail regardless of whether the input is AC coupled or not . AC coupled with clamp diode is a DC restoration method. So called "Active clamp" uses a transistor in some topology.

Clamp or voltage limiter protection is preferred terminology for ESD.

Note that ESR of high speed , low current (5mA max) diodes affects voltage vs current rise, so for high V , so 2 stages are used to get better clamping. 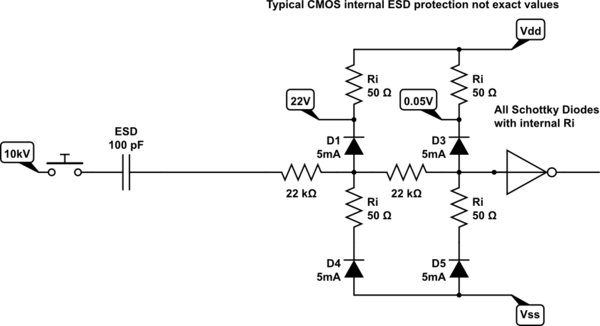 Clamper vs Clipper: In this application, perhaps both terms might be used. From the microcontroller's point of view, those protection diodes help to limit I/O input voltage from exceeding the supply voltage by conducting current into the supply.

Wiki suggests this for "clamper":

Clamping can be used to adapt an input signal to a device that cannot make use of or may be damaged by the signal range of the original input.

This is exactly the case for your microcontroller situation. So it would appear that "clamper" applies here. A capacitor isn't mandatory, but I'd suggest that an input resistance, source resistance, or some kind of current-limiting is required that your example doesn't include. Otherwise those two diodes are at risk due to excess current while they try to "clamp".

As for "clipper", wiki suggests:

This definition is somewhat broader, allowing a circuit to either exclude/include the middle portion of a waveform. No capacitor is mentioned. Since your circuit example includes the middle portion, and excludes voltages beyond the 5V supply, this term applies as well.

Not the answer you're looking for? Browse other questions tagged microcontroller adc voltage-clipping diode-clamp or ask your own question.

0
RC filter on a clamping circuit
1
Output of diode clamper circuit for a sinusoidal wave input
0
OP-Amp Diode Clamping Circuit
0
How does the capacitor push up the voltage in a diode clamp?
0
Signal buffer with op-amp clamping and voltage bias
0
Polarity of input signal and capacitor in voltage clamper
1
Active clipper terrible performance