How do I cause one switch to “lock out” other switches in parallel?

I have several momentary switches that are foot pedals (just two are shown below). 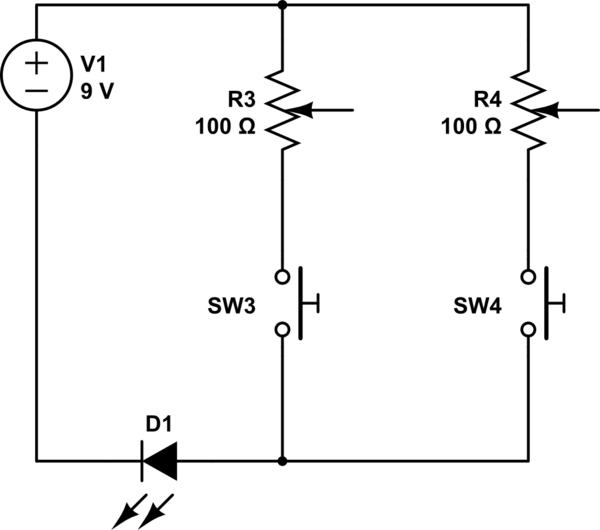 The goal is to supply the LED (or whatever) with different levels depending on the variable resistors.

The problem is that pressing two switches simultaneously combines the resistances.

When one switch closes, it should prevent the others from affecting the LED.

Which of these is the easiest to implement conceptually?

Are there any other options?

I chose the NAND gate idea as the answer because it fits my question. But the relay idea was also good if you have those switches.

When one switch closes, it should prevent the others from affecting the LED...

I could use a microcontroller but if there is a simpler option I'd prefer that. The other options I can think of are logic gates, a latch circuit or an IC.

Which of these is the easiest to implement conceptually?

Conceptually, a circuit using logic gates is the most obvious solution. When a switch is closed it must switch in its resistor unless any other switch is closed. Therefore each node has to somehow be able to tell that all the others are off before it turns on.

With two switches the circuit is the same as an SR latch, but operated 'inverted':- 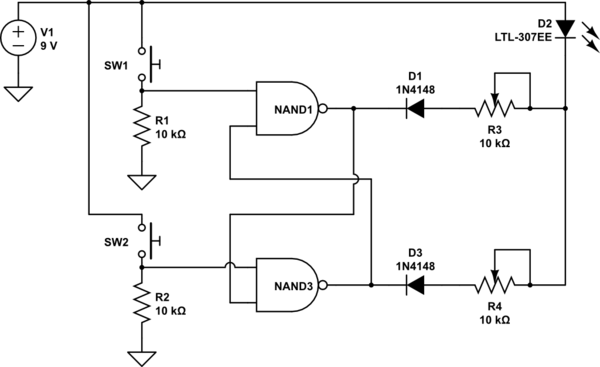 When a gate is 'on' it pulls its associated variable resistor low. The diode isolates the resistor from the gate's output when high, so only low output affects LED brightness. The gate output could be used to drive a transistor if the logic gate cannot provide sufficient drive by itself.

With 3 pedal switches each gate has to monitor two other outputs, so 3 input NAND gates are required:- 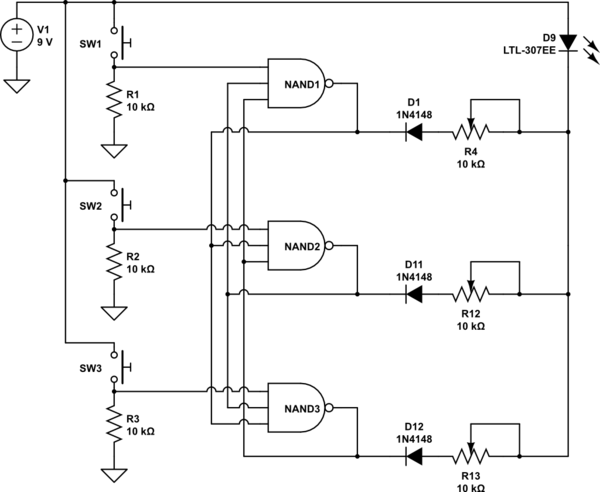 As more pedal switches are added the gates need more inputs and the wiring gets more complex. Standard TTL/CMOS logic gates are available with up to 8 inputs in a single IC. Beyond this you need to combine several gates to make each NAND, and a PLD (Programmable Logic Device) or MCU becomes attractive. Wiring complex circuits is tedious and error prone, so for any more than 4 switches (two 4 input NAND ICs required) I would probably use an MCU.

This scheme uses the difference in relay pick and hold voltages to do what you require. It has the small disadvantage that 2-pole foot switches are required.

DC relays typically pick at about 2/3 of their rated coil voltage and will remain on until the coil voltage drops below 1/3 supply. (These figures are very rough.)

R1's value will need to be established by experiment. A value close to the coil resistance should give you 1/2 supply on the coil and this should be sufficient.

Figure 2. By using changeover contacts only the highest priority switch will feed the "LED" load in the event that multiple switches are pressed.

If you just want switch priority then Figure 3 would suffice. 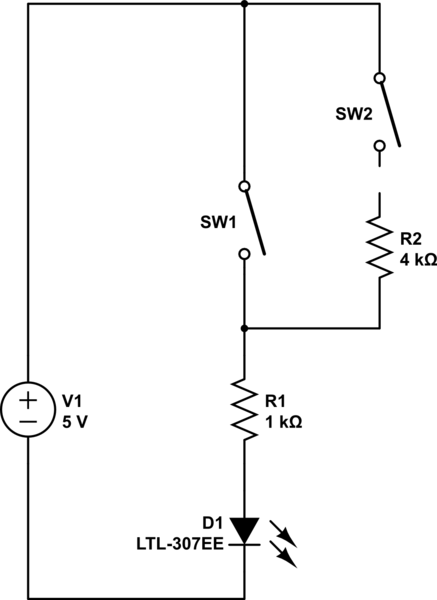 This fulfills the stated requirement of making SW2 have no effect if SW1 is already closed. And it produces the same LED currents as your original when either SW1 or SW2 is closed. I changed the V1 value because 1 V is not realistically enough voltage to turn an LED on.

How to extend it to more than 2 switches depends on the details of which switch you want to have priority.

I never thought I'd be saying this, but it appears you may have found one of the few applications in which discrete diode logic could be useful... 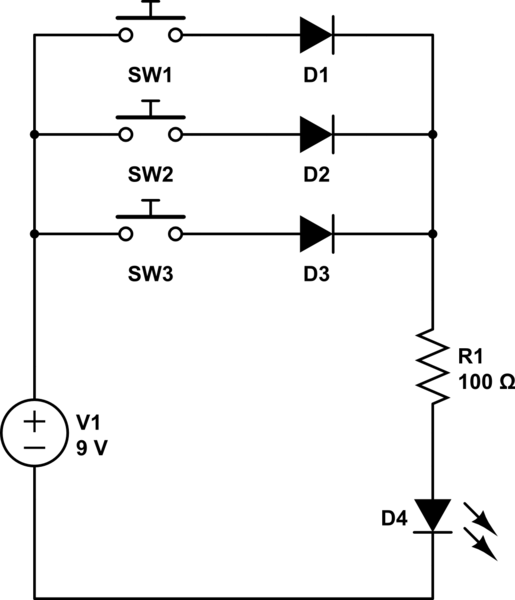 The above circuit forms an OR gate using only diodes. When one turns on, roughly 8.3V is supplied to the resistor and LED. If another switch is pressed, the voltage across the LED and resistor stays about the same, and the current is split between the two (or more) of the diodes.

If the brightness of the LED varies significantly when different switch combinations are pressed, try adding a small resistor (less than 100 ohms) in series with each diode. These resistors will help equalize the current across each diode, but may also cause a larger change in current across the LED. 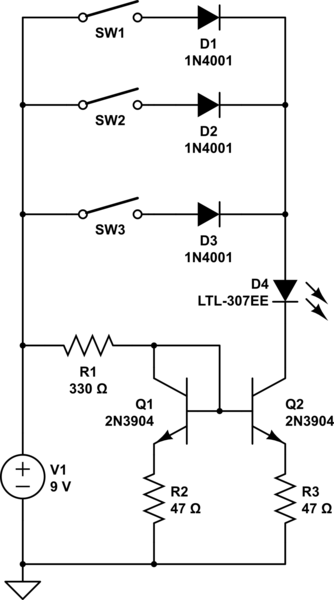 Not the answer you're looking for? Browse other questions tagged switches parallel latch or ask your own question.

1
Connect multiple in/outputs in predefined order (beginner question)
0
Advices on building a USB switch
1
Is there any notification system that can turn on a LED pulse?
0
Wiring illuminated momentary switch to breadboard
0
How to/should I bypass switches?
0
Momentary Switch NAND Latching IC Burning and (Possibly) Faulty Logic
3
How to switch composite video signal inputs to one output
0
Multiple input to single output converter and vice versa