I am running an experiment using graphene at the moment to create energy from different chemical solutions. A link to what I am building on is below:

Amazingly, this does actually work; it is possible to get intermittent pulses of voltage anywhere from 40mV to about 100mV with a period of a few tens of ms when a drop of solution is dropped onto a small sheet of graphene. The reason I say intermittent is that I am dropping the drops of solution intermittently onto the graphene itself, which would be analogous to a real world situation.

However, I am struggling to harness this voltage/energy.

I have tried to put different capacitors in series with the graphene sheet, such that the voltage pulses could be stored in this. However, I think what happens in this case is that as soon as a voltage pulse (presumably) goes into the capacitor, it is just leaked away completely back into the graphene sheet, which is effectively just a resistor when not generating small pulses.

The fact that the pulses are so small means that I can't use a diode. And I don't want to use a transistor switch if I can get away with it, because having to apply an external voltage to this circuit defeats the point of what I am trying to do.

Any comments much appreciated!

Disclaimer : i am no physicist, but here is my best guess :

I think that harnessing 40mV would not be very efficient, you should try generating more than that before.

From the paper you linked, i understand that a drop moving on graphene behaves like a current source in parallel with a resistor : 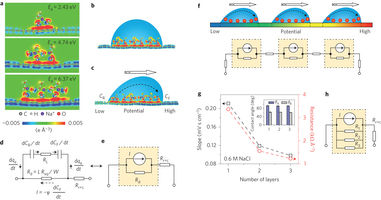 For clarity, I will from now on call the resistance in parallel with the drop the intra-cell resistance.

To allow/improve the energy harnessing, you have two angles of attack : You can either increase the intra-cell resistance, generating a higher voltage (Ohm's law) and wasting less energy, and add more sources in serie, effectively increasing the voltage, making it easier to harvest.

From Wikipedia, we know that for a given material, resistance is inversely proportional to the cross-section, which means that if you use a thin strip of graphene instead of a sheet, you should obtain better results (higher voltage and longer pulses) around the drop, but worse results between drops, which brings us to my second point :

Connect your "cells" is series

From the same paper (and intuitively), we learn that drops following each other behave like such source-resistor pairs in serie (adding the resistance of the graphene between the drops, which we will call inter-cell resistance).

Using medical devices, you can control your drop frequency, and conduct experiments to find your optimum.

This is a wild guess, but what if instead of a graphene sheet, you used horizontal strip? or even dots? this way, the intra-cell resistance would be much higher.

Not the answer you're looking for? Browse other questions tagged capacitor passive-networks energy pulse energy-harvesting or ask your own question.

14
Is it possible to use Kinetic energy to power small devices?
5
DIY kinetic energy harvester
1
Why harvesting energy why not harvesting power?
6
Resistor power rating for short pulses
0
Energy consumption of a small TFT
2
generating 10-100 ns pulses with 20 Hz frequency
0
question on diode in the Energy storing circuit
6
Teg energy harvesting by ltc3108