Why telephone dc voltage drops to about 8 volts? [closed]

I found out that the DC voltage supply is about 48 volts in the central office, and the typical line impedance is about 600 ohms. Also the typical current in off-hook state is about 20mA.

So with a simple calculation, I see that the dc voltage in off-hook state must be about 48 - 12 = 36 volts at 20mA current. But in most resources I saw that the typical value for this is less that 9 volts (and I've seen same thing in practice).

The AC line impedance is 600Ω, but DC resistance is adjusted at the central office to regulate current. This is done to reduce the effect of line length on the operation of the telephone. The phone needs some current to work, which drops voltage across the line resistance. Without regulation a phone on a short line would have to handle more voltage than one on a long line.

In the old days current regulation was achieved with a special incandescent lamp, which took advantage of the filament's positive temperature coefficient to increase resistance as more current flowed. The circuit below shows part of a Strowger Final Selector (NZ UAX No.13 type 2-10). When relay contacts H1-3 and F5-6 are closed they connect -50V and ground to the telephone line via the dual filament lamp BRA and relay coils D. The relay coils have high inductance so they are a high impedance at voice frequencies, but only 100Ω at DC. The lamp filaments provide the extra resistance required to limit line current. 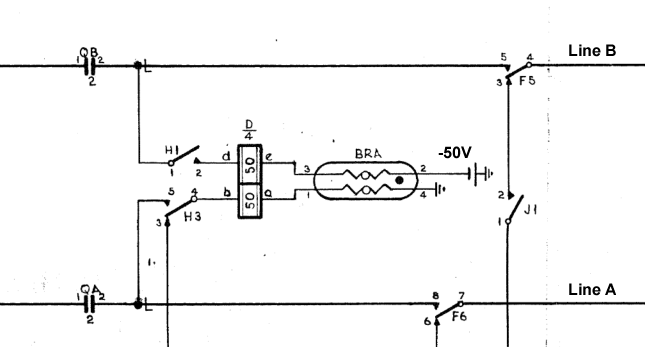 I have the most recent official specifications document for the US phone systems (the specification includes lots of operation regions, since they had to accommodate various central office equipment manufacturers) somewhere here in the house and could, if asked, find and refer to specific charts and text, if seriously needed.

I do also recall that the specification specifically suggested an on-hook handset impedance of \$20\:\textrm{M}\Omega\$ and that in no case should the entire location's on-hook impedance go below \$5\:\textrm{M}\Omega\$. This was why I secured the specification, in fact. I was designing a circuit to show if the circuit was available, powering the entire circuit and LED from the nearly inconsequential current available. (That was a problem, but an achievable one. I had to use a relaxation oscillator that just barely trickled charge to a capacitor and then used a self-triggering SCR and some added components to shape and distribute the accumulated energy for the LED pulse.)

There is a lot of history to take into account. Early phone and exchange circuits are not the same as modern electronic versions.

A lot of standards converged:

The open circuit (on-hook) line voltage is close to 50V DC with one leg near ground potential and the other generally negative with respect to that (though polarity switching was common on PABX systems for out of band signalling). This is in part due to the use of 4 x 12V 6cell lead acid accumulators to operate the exchanges during mains failures. In practice large exchanges would have been 40 to 50 V and many PABX systems designed for 12 to 30V with 24V battery backup. A 12V circuit voltage is not always sufficient to be able to reliably detect the off-hook condition of a low power modern handset if it is using a 12V clamping circuit, it may only draw a few milliamps for the circuitry and the off-hook clamping circuits may not draw a current until it exceeds the 12V threshold, this was a problem when trying to use standard handsets on some PABX installations.

The ringing voltages approached 90V AC at around 16-25Hz with I vaguely recall 20Hz being common. The cadence was regional and could indicate local or outside caller in a PABX environment. This voltage was originally selected to match what was easy to generate with hand cranked generators, did not stress the insulation and was far enough outside the voice band to not pass into the speech circuits at full potential, it was AC coupled to the ring circuitry. The voltage was limited for safety reasons and also to match commonly available gas and other transient suppression devices.

The evolution of the twisted pair overhead lines (yes they were, at every other pole on alternate pairs) and the twisted insulated pairs in underground cables was standardised at 600 Ohms. However until the migration to higher speed modems, ISDN and ADSL the characteristic impedance of short sections of the line were not as critical. The aerial wiring from the pole to the house and inside the house were often untwisted wiring of undetermined impedance and jumpers and links in junction boxes and the exchanges could be of a relaxed specification.

The exchange DC resistance was standardised to around 2000 Ohms to match the characteristic impedance of the lines and the typical current requirements of the early handsets. The off-hook condition was signalled by the current draw of the handset and needed to be distinct from the leakage current in the on-hook condition in long runs of wires with sometimes questionable insulation. The exchange resistance and the wire resistances were adjusted at times to account for long lines and other taxing conditions.

While early handsets applied a resistive load to the line that would be detectable by the current drawn modern handsets are designed with voltage clamps, either active or simple Zener diode circuits to clamp the off-hook voltage around 8-12 V with reasonable source impedances. This is to allow for easy voltage scavenging for the electronic circuits of the phone, modem or other instrument connected to the line. The ringer circuits were powered by the AC coupled ringing voltage.

The POTS system was very reliable and supported out of band signalling by making and breaking the loop current for pulse dialing and flash purposes It was able to evolve to support DTMF (touch tone) dialing, voice band modems, ISDN and ADSL systems over the same copper conductors and physical routing infrastructure.

If you want to research how handsets could be made to work then I would look at old application circuits for early analogue modems and other phone accessories. If you want to find out how the exchange circuitry was implemented then look at application notes on hybrids which was the industry term for the very interesting transformer or semiconductor circuit that would convert the bidirectional 2 wire line to a 4 wire configuration to allow for amplifying, multiplexing and digitizing of one directional signals. The PABX market had to be a virtual exchange for the local handsets (often at reduced voltage) and also mimic a telephone instrument to connect to the PSTN network and they have specifications listed in some of their documents (see section 5.1 of this linked document).

@jonk has alot of good info. If you have a DMM, you can check if your handset is like typical old std of. 180 ohms DC. This is what I would expect. The rest is line loss.

Some very good notes. The older Western Electric telephone (Model 500 I recall) was an engineering work of art as the result of many years of refinement.

These phones included varisters (resistance changes with current) which modified microphone to earpiece volume ratio. For long lines with higher loss the CO would adjust line current which caused users to speak louder. This is a pretty tricky task as the phone is a hybrid device that separates incoming signals from out going signals. And there were a bunch of other "Features" rolled into the phones such as "Anti Tinkle" circuits. (Prevent bell noises during dialing.)

If you have an old Model 500 keep it, it is a work of engineering art.

Not the answer you're looking for? Browse other questions tagged voltage dc telephone or ask your own question.

29
Transmission line reflection. I would like a non-mathematical explanation

2
about power, voltage and current
1
Why the diode has higher impact on dc characteristics than ac?
1
Why is the Inductive reactance formula (XL=2πfL) not working for me?
1
How would you increase voltage to drive an LED yet also keep it limited?
1
Why is the voltage across collector and emitter pushing itself to 0.7 volts?
3
Analog (POTS) telephone off-hook detection
6
Is it safe to touch 200 volts DC?
8
Make old telephone ring