Maximum current is drawn from a cell when it is shorted. But, why?

First, I must apologize for the trivial-sounding question. We've only recently started with Current Electricity in class, and our teacher posed this question (well, something similar) to us.

For what load (resistance) will the current drawn from this (simple) circuit be maximum? 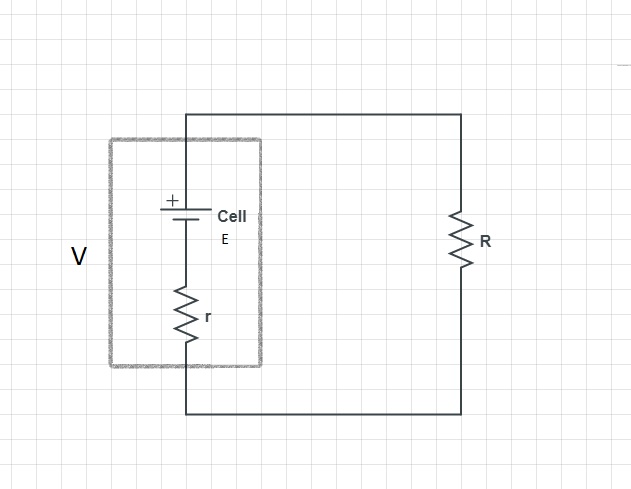 It was pretty obvious that we'd be able to draw maximum current from the cell if we shorted it...however, we were asked to prove it.

So, for a given cell, I assumed V to be constant. In that case, current I is inversely proportional to load resistance R. And since the lowest, real value of R is zero, maximum current would be drawn when the cell is shorted across its terminals.

According to this equation, for R = 0, I'd get infinite current.

My teacher has provided a different proof instead.

We have the equations,

So, combining them, we get

Which when rearranged gives,

Both my "proof" and the one my teacher supplied seem logical. Both our conclusions, qualitatively, make sense (Maximum current when R = 0).

But my "proof" suggests an infinite current will be drawn from the cell, whereas my teacher's proof shows that a finite current ( equal to E/r ) is drawn.

1) Where have I gone wrong with my "proof"? It doesn't seem like I've messed up the math... but when compared to my teacher's proof, the infinite current thing doesn't sound right (Hence my assumption that I'm the one who's in the wrong here). Perhaps, I interpreted my own "proof" incorrectly?

2) What would be a better proof (if you know of one) of the fact that current drawn from a cell (with finite internal resistance) is maximum (and finite?) when R = 0?

Additional question (Since this from the same vein as the previous two, I feel it's best posted here instead of in a separate post)

3) I've been told that maximum power is drawn by the load in such a circuit (the one my teacher provided) when R = r. This sounds a little off. Isn't power proportional to current (Since P = VI, and for a given cell, V is constant)? Since we already know that current is maximum when R = 0, shouldn't it make sense for the power to be maximum when current is maximum (i.e- at R = 0)?

Your mistake comes from not combining your two equations properly:

You correctly rearranged the first equation to get $$I=\frac{V_{cell}}{R}$$ but then you forgot to substitute the second equation. You have not fully solved for \$I\$ since \$V_{cell}\$ is in fact a function of \$I\$. You must do as your instructor has done and make a substitution: $$I=\frac{E-Ir}{R}$$ and further rearrange this equation to end up with what your instructor provided: $$I=\frac{E}{R+r}$$ To maximize this you want the denominator to be minimized, therefore current is maximized when \$R = 0\$

In order to solve for the maximum power transfer you have to calculate both \$I\$ and \$V\$ as a function of only \$R\$:

The power delivered to your load resistor is the standard power equation: \$P=IV\$. However, as your resistor changes, so do both \$I\$ and \$V\$. As \$R\$ increases \$V\$ increases and \$I\$ decreases. So it isn't as simple as picking \$R\$ to maximize either current or voltage. You must maximize their product, as I have shown above.

Here is the false assumption:

So, for a given cell, I assumed V to be constant.

In a real battery, the voltage decreases as current is drawn. A real battery is complicated, but we often model a battery as an ideal voltage source with a series resistor (called source resistance). That is the small r in your circuit above.

The ideal source voltage (E) is constant, but the actual voltage that you could measure across the battery terminals is not.

By the way, it's worth looking at a battery datasheet, such as Energizer E91 AA Alkaline Battery. You can see from the graphs that the real battery behavior is nonlinear, but those curves can be approximated as a line with negative slope -- ideal voltage under no current, and less voltage as current is drawn.

Not the answer you're looking for? Browse other questions tagged power resistors resistance cell-battery internal-resistance or ask your own question.

0
Maximum resistance allowing for short circuits
15
How to calculate the maximum current a AA battery can deliver for a short period of time?
3
What determines the amount of current that can be drawn from a generator?
0
Why should each row of cells in battery grid have equal number of cells for maximum power transfer?
3
Power produced and internal resistance of solar cell vs distance from light source
0
IV relation changing load resistor of a solar cell
4
Decrease of internal resistance of a solar cell while increasing the load resistor?
1
Estimating Li-Ion (or any other type) battery resistance
1
Considering power loss in a simple series connection due to cable
0
DC Power Supply maximum current