I'm trying to figure out how to determine what frequency an electrodeless conductivity sensor needs for accurate measurement.

An inductive sensor consists of two wire-wound metal toroids encased in a corrosion-resistant plastic body. One toroid is the drive coil, the other is the receive coil. The sensor is immersed in the conductive liquid. The analyzer applies an alternating voltage to the drive coil, which induces a voltage in the liquid surrounding the coil. 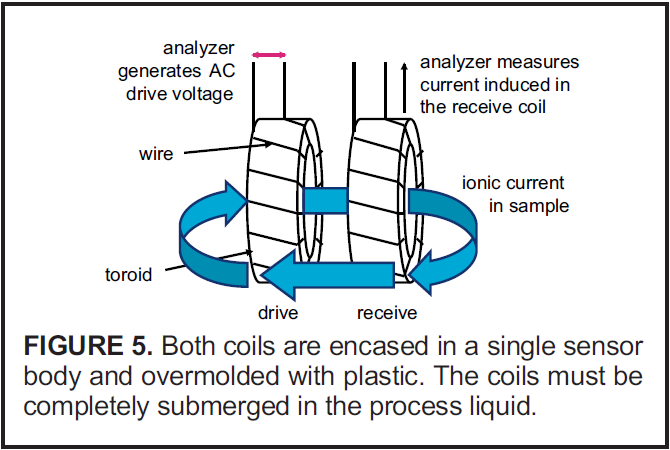 However, how do i calculate the frequency of the AC signal?

The core material almost has to be supermalloy to minimize leakage induction. That material works best in the audio range, so I would say 5 kHz would be a good choice for drive frequency. It would also make signal processing simple. You mention 84 kHz. It might be possible to work up a practical system that works at that frequency, but I don’t see it as a first choice. The high frequency would increase problems with driving the Drive coil, shielding, power consumption. Supermalloy is very pricy however, so maybe someone worked out a system that uses ferrite that works well at 84 kHz. The magnetic properties of water should not be relevant. Think of the blue wire as just another transformer winding.
Not shown is a shield between the Drive and Receive coils in eliminate capacitive and inductive crosstalk. My first thought was mumetal, but I’m not sure you need anything that exotic. You might think crosstalk would not be a problem because these are toroids, but that assumes perfect symmetry in the windings and cores which will not happen.

Think of the blue flowline shown in your figure as a wire. If one were to place a wire along that path, a current would flow in that wire because the wire is another winding on the toroidal core of the drive coil. The magnetic flux through the wire loop changes and thus there must be electromotive force induced in the loop. The greater the conductivity of the liquid, the greater the current for a given emf. Of course, the conduction current in the liquid will follow many paths, or rather a continuously distributed path; think of all these paths as windings on the drive core.

The system is akin to a three-coil transformer. Primary (drive) induces current in the secondary (liquid), which, in turn, induces current in the tertiary (receive). The net effect, the ac voltage in the receive coil, is proportional to the excitation and the product of the mutual inductances: \$M=M_{12}\cdot M_{23}\$. (Of course there is also \$M_{13}\$, but it is usually minimized in this type of sensor by placing mu-metal shielding between the toroids.)

Recall that in a transformer, the mutual inductance is a constant that is only related to the winding geometry and does not depend on frequency. In an ideal transformer, a voltage waveform applied to the primary passes straight through to the secondary (and, in this case, the tertiary), only multiplied by the turns ratio and unperturbed by frequency-dependent distortion.

So, in the zeroth approximation, it doesn't matter at what frequency you drive. In the first approximation you take into account self-resonance in the three coils; you'll only be able to excite the drive coil if the frequency is below its self-resonant frequency.

In the next approximation, you want signal to be above noise. Noise in liquids, and in the measuring apparatus that is connected to the receive coil, usually has a \$1/f\$ component, and liquids are notorious for strong \$1/f\$. So, you want your drive frequency to get above the \$1/f\$ noise knee, whatever it is in your system. Thus the answer: Drive as fast as you can while staying below attenuation brought along by self-resonance. In other words, keep increasing the drive frequency until you start getting less output.

I've worked on a similar problem for an electrode version and it came down to making good measurements between input and output (this may or may not apply to your system). What I mean by that is ensuring that the injected frequency has a flat gain gain and phase response for the solution being measured.

For the system I was working on this was a concern for several reasons, but it might not be for your system. The main thing that matters is that your solution's conductance is not a strong function of frequency.

You can use a frequency response analyzer to test solutions you're trying to measure conductance of and get an idea of where this frequency occurs.

To better understand what is happening with your sensor, lets use two plates instead of the toroids. In this case the plates form a capacitor and the fluid is the "dielectric." As it is well known, the electric field on one plate (driver) induces a voltage on the opposite plate (receiver). Since capacitance depends on the dielectric properties of the fluid between the plates (air, water, oil, etc.), a sensor made of two plates would measure the dielectric properties of the fluid (using air as reference point).
In the case of the toroids, it is the magnetic field on the driver that induces a voltage on the receiver, and similarly to the previous case, the magnetic properties of the fluid (its permeability u, not the conductance) of the fluid, is what is being measured!

Not the answer you're looking for? Browse other questions tagged sensor ac conductivity or ask your own question.