Why is the bunny-ears TV antenna normally connected to 300 ohm twin lead?

The bunny-ears antenna is similar to a dipole, which has an impedance of ~75 ohm.

Why are the elements of such antennas connected directly to 300 ohm ladder line? Wouldn't that cause mismatch losses (even with the other end going into a balun)? 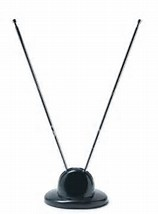 "Bunny-ears" antenna is a non-technical term for a dipole antenna. At its resonant frequency, a dipole has about 70 ohms impedance at its feed-point. To avoid signal loss and reflections, a matching transformer is needed. This simple bunny-ear dipole should include a 300-ohm-to-75-ohm balun inside, at its feedpoint, if its feedline output is 300-ohm balanced transmission line. However, any modern TV has 75-ohm input, usually identifiable by its "F"connector: 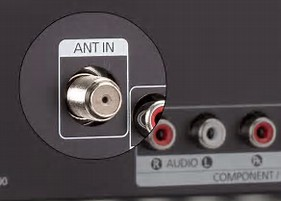 Some very old TV's have antenna impedance of 300 ohms impedance: these do not have "F" connector, but two screw terminals instead. These TVs are meant to accept balanced 300-ohm twinlead directly. A balun transformer matches 75-ohm to 300-ohm. Balanced 300 ohm feedline was used at VHF frequencies because it has low signal loss, when its path from antenna to TV is chosen with care. Today, 75-ohm coaxial cable is often used instead for two reasons: The path to TV is not as critical, and antennas often have preamps, making cable loss less important. 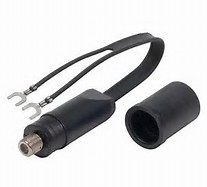 A simple dipole antenna with 300-ohm feedline should include a balun at the feed-point. However, be aware that TV channels are spread over a wide frequency range, so that fixed-length dipoles used for TV reception on many channels are often not resonant.
A folded-dipole antenna is often made with 300-ohm feedline, and has resonant impedance near 300 ohms, and can feed a 300-ohm transmission line directly, with no balun. Where the 300-ohm transmission line connects to a modern TV having an F-connector, a 300-ohm to 75 ohm balun would be required.

edit: At resonance impedance matching should help deliver maximum signal power. But nobody ever adjusted element lengths to resonance for the TV channel they were watching. Dipole impedance would be unknown for different TV channels...very likely much higher than 70 ohms.
Given this situation, standing waves along the transmission line that connects antenna to TV will cause signal loss. To make the best of a poor situation, the lowest-loss transmission line is used. 300-ohm twin lead can be very low loss, better than coax. And its higher impedance has a better chance of randomly coming close to the ideal 1:1 standing-wave (SWR).

Yes, there are indeed mismatch losses because the feed line is 300Ω and the antenna impedance is in the range of 50-73Ω. The mismatch losses are around three decibels, or half of the input power.

The reason for the simple direct connection is because it works - in most cases the losses are acceptable because the maximum range of the TV signal is only reduced by ~30%.

Not the answer you're looking for? Browse other questions tagged antenna impedance impedance-matching coax dipole or ask your own question.

5
Transmission line for UHF TV antenna
2
Impedance Matching Antenna
39
Why is 50 Ω often chosen as the input impedance of antennas, whereas the free space impedance is 377 Ω?
0
When deforming a resonant circuit into an antenna, why can we cut the inductor in half?
3
When are 1:1 baluns worth it?
0
More on standing waves in a dipole antenna
0
Why is a microstrip line unbalanced?
3
What causes energy to be radiated away from an antenna