the company i work for has tasked me in rebuilding an old LED sign we had replaced. (newer led rgb version) The driver board that was in the sign has gone out. So i am trying to rebuild the driver boards.

The boards are 8x8 for a total of 64 leds per board and 32 boards. I have done multiplexing of led's before the problem i am running into is that the board is NOT set up as the following....

however, they are set up as the following 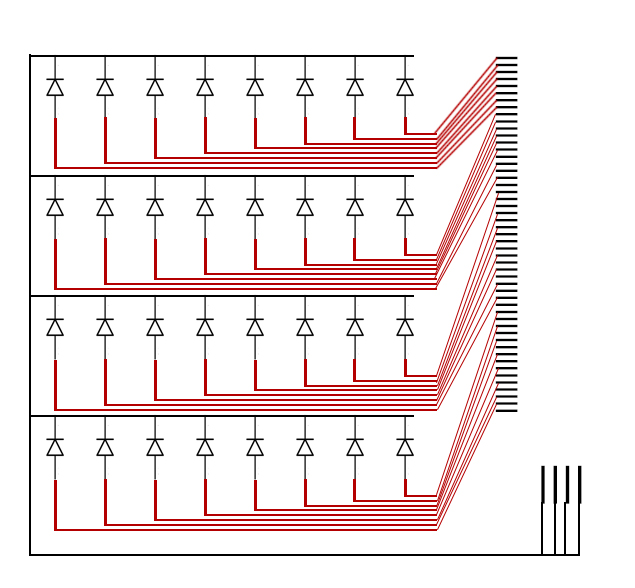 As you can see they each have their own pin but share a common ground. I am having a problem finding something that can control that many leds at one time that can be expanded to 32 other panels.

I found the Mux Shield II over at sparkfun but i dont think its big enough to do what i want. What am i missing there has got to be something out there that will control 64 leds at a time!

Also the led boards are RED led's only. no RGB

I doubt there is an IC out there just for controlling 64 lines in a grid pattern.

Now, since you mentioned things like the Mux Shield, Arduino, and Pi in your question and comments, would 8 shift registers be sufficient? I know that this would work because I actually built a non-multiplexed LED array using 8 74HC595 shift registers and 64 individual wires to each LED (hand soldered, it was a lot of work). It was driven by an ATmega328p at 16MHz and there was no noticeable lag in the screen update.

I know this is not the ideal way to control an LED array, but given your situation of 64 individual wires, I think shift registers would be a feasible, and possibly the only way forward.

There is any number of led or segment driver that can handle this.

Just cause each LED has it's own anode pin does not mean you have to use it like that.

Simply tie the anodes together and drive them like that. Suddenly you have gone from 64 individual lines to drive, to 16. In the same exact 8x8 matrix configuration. Of course now you have to deal with scanning or multiplexing the displays.

Not the answer you're looking for? Browse other questions tagged led led-driver led-matrix matrix dot-matrix-display or ask your own question.

1
Hooking up an 8x8 LED board
0
How can I hook this 8x8 rgb led up to an arduino?
0
How to control a common-cathode RGB LED matrix with Arduino?
1
Where do the RGB LED matrix resistors go?
0
How to interface matrix LED with beaglebone black
0
8x8 RGB LED PWM matrix with TLC5947 which IC to use on the cathode end?
0
controlling many LEDs on an individual basis
0
How to stop current leakage in LED matrix
1
LED matrix on keyboard