I found the following circuit interfacing with a GPIO input on an MCU that has an internal pull up resistor. The GPIO is being used to detect the state of the push button. I have two questions regarding this circuit:

Any help is much appreciated!

EDIT: The GPIO is now called out in the image. 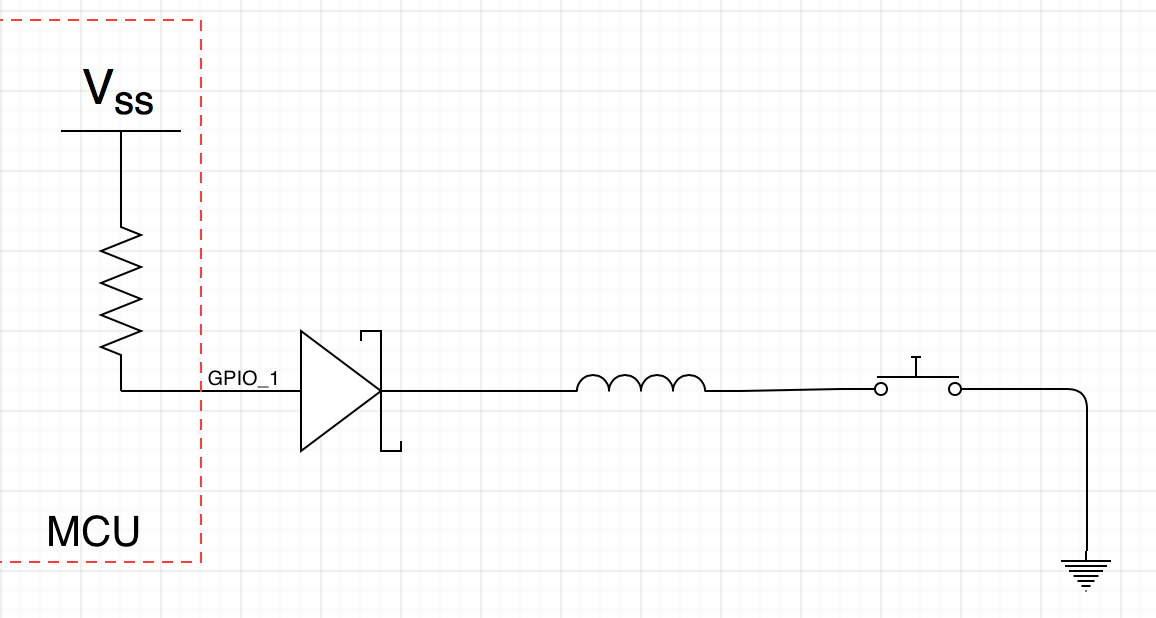 The inductor slows down (only) the falling edge of the signal, so any bouncing will reset the state:

The diode does not make any difference in the simulation. But the only difference it could make is to block any positive voltages from the inductor, so so I'd have to guess that the designer feared this could happen when the switch is opened.

When looking at inductor circuits I sometimes try to visualise what the complimentary capacitor circuit would look like. In this case that would be a cap between the GPIO and GND. So, for the inductor it would have to be in series with the input.

My guess is that as the switch closes we have an R-L time delay before the GPIO is pulled low. When the switch opens the inductor will force some current through - giving a micro-arc - until the switch is truly open.

How does the inductor debounce the push button?

I think I've covered that above.

What is the purpose of the diode here? If it is a flyback diode, ...?

I don't know but there are usually input protection diodes on the GPIO so the one pointing up from GND to the GPIO would suffice to provide the ground return path.

No. I think that in this case we want to force an arc.

Maybe someone else can think of a reason for the Schottky diode. I might if I sleep well enough.

Not the answer you're looking for? Browse other questions tagged diodes button flyback schottky debounce or ask your own question.

4
Strange (flyback?) diode in a circuit with a transistor switching an inductor
0
How to wire up a circuit with a button that cancels other circuits
1
Debouncing this Rotary Encoder Switch
1
What are the mechanisms at work in a pull-up or pull-down resistor circuits with a push-buttons and a GPIO?
5
Using a large resistor instead of a flyback diode
1
Push button debouncing circuit without extra IC? Possibly RC based?
28
Smart ways to detect a button (less power consuming)
1
Flyback Diode for 24V DC Solenoid
1
microcontroller with buttons/LEDs — fallback when Hi-Z