Tool for "designing" a resistor network?

I'm preparing to calibrate some current sensors for a system with DC 13.6V power, and various loads, from well under an amp, up to about 4 amps. I bought some 2, 3 and 5 ohm power resistors, and plan to arrange them in various series and parallel networks to calibrate each current sensor using a load with known resistance.

It's easy to calculate the resistance of some resistors in series or in parallel, but I don't have a technique for generating a network with a desired resistance. I would like to come up with values that result in "well rounded" maximum amp values, such as very nearly 5 amps for the circuit that is supposed to max out around 4 amps, but so far I've just been making guesses. Sigh.

Is there a tool for doing this, or a reasonable "by hand" method? Thanks.

It constructs a network with your desired equivalent resistance, out of the values that you have in stock.

I don't know if you've considered continued fractions, or if they'd do anything you care about, but here's something that may be worth considering.

In the above starting case of \$12.5\:\Omega\$ and using E12 resistor values, the following possible circuits develop: 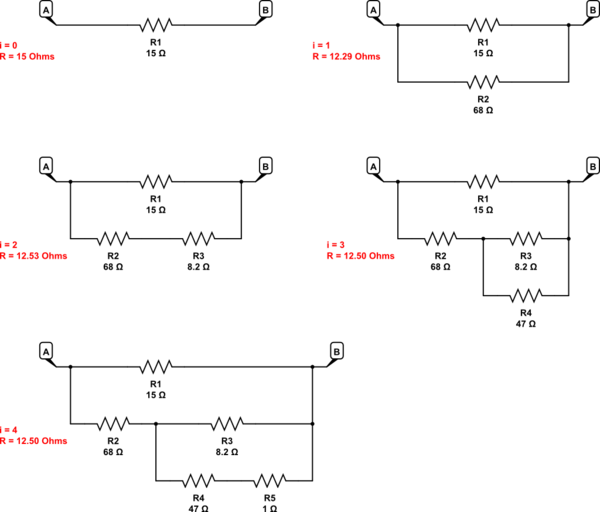 And so on. You can see that it rapidly approaches the desired value. Most of the dissipation is usually carried in the first resistor. Whether or not this is good or bad, depends. The gist of this is that you are almost always very, very close with no more than three or four resistors with E12.

Here's the same approach, but used with E24 resistor values: 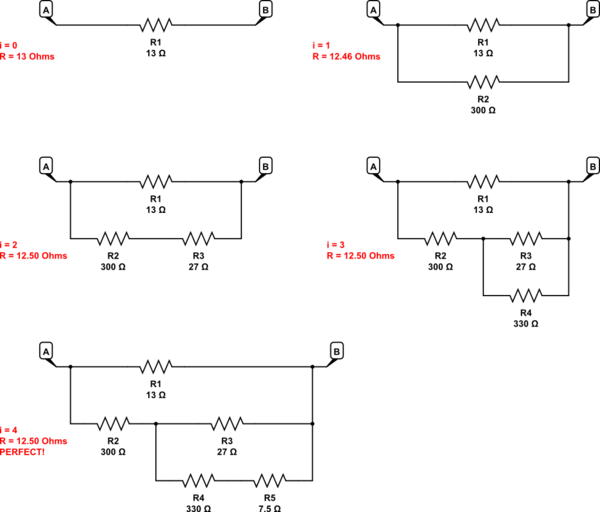 Note that at the even steps of \$i\ge 2\$, you can also consider summing the two series resistor values and picking the next higher value that closely matches as an alternative to step \$i-1\$, too. For example, in step \$i=2\$ of the above E24 resistor selections, \$R_2\$ and \$R_3\$ could be summed and then the choice of \$R_2=330\:\Omega\$ could be used instead of what was used in step \$i=1\$. In the above case, this would have been a better choice for \$i=1\$ than just strictly following the algorithm I gave earlier.

This points up a slight improvement to the algorithm. The value of \$R_x\$ should be considered as either one resistor of next higher value, or else two resistors composed of the next lower value, plus the difference rounded up to its next (or similarly convenient) higher value.

Also, the algorithm doesn't always find optimal choices. For example, this could have been \$12\:\Omega\$ in series with two, parallel \$1\:\Omega\$ resistors. And that would have been exact. But what it does do is to continually diminish the residual error (assuming exact resistor values.)

(Offered in the case it matters to you to have a codified, step-wise algorithm you can follow without just doing "hit and miss.")

This is a "I think it's easy enough to go and try with a modern computer" answer.
I'd be more than interested in a good answer or reference to an actual theoretical approach to OP's problem. It has been asked before, but I can't find it. The problem is very nice.

The problem of finding a graph (i.e. a network) whose flow (i.e. whose total resistance/conductivity) given edge weights comes as close as possible to a specific value does sounds algorithmically hard¹.

But frankly: I'd just go and find a formula for the resistance of each combinations of 2 resistors (which are only 2: parallel or serial), 3 resistors (all three parallel, all three serial, one parallel to two in series, one in series to two parallel), and 4 resistors.

Then, write a script that simply tries all these with all the different combinations you can draw from your reserve of resistors.

If you don't get close enough, take the list that the last step generated, and act as if you can use these as individual resistors: add these values to your list of available resistors, and repeat.

¹ That guess, by the way, is based on me imagining finding all flows through a graph being similarly complex as finding all paths.
Share
answered Aug 22, 2017 at 23:02

The simple solution is to design an active "dummy load" using a darlington power transistor or power FET as a constant current sink with a 50 to 100mV voltage drop at rated or max load current for ground current sensing. Then you just need a Pot or a DAC and comparator to regulate the voltage compared with Vsense.

Yes, there is at least one calculator for two resistors, which you can access here.

Here is an example calculation to get 12.5 ohms using two 10% resistors in series or parallel combinations. 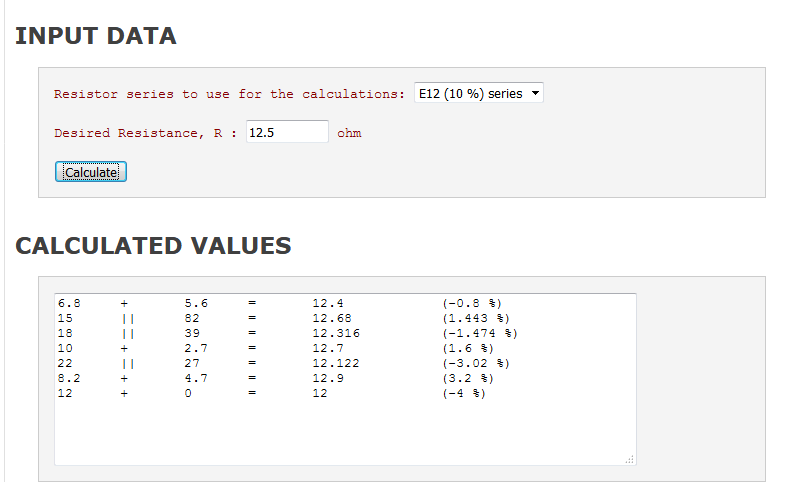 Not the answer you're looking for? Browse other questions tagged resistors parallel series or ask your own question.