What is the simplest way to generate PWM without a Microcontroller?

What is the fast and elegant way to generate PWM without a Microcontroller to control a servo motor? With potentiometer or other ways to control the duty cycle with fix period.

I recommend the (GASP!) 555 Timer in "astable" mode. You'll find everything you need in the link, but I copied them here just for you!

Astable mode gives you a variable PWM frequency, and allows for an adjustable duty cycle as well (high-time and low-time equations in the link). 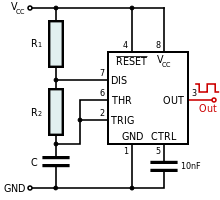 Note: I'd add an electrolytic cap across Vcc (positive lead) and GND (negative lead) to reduce the effect of dips in power supply voltage.

Some defense for my answer compared to others in this post. Most other answers require an intermediate waveform to generate a variable PWM signal, such as the common triangle wave/comparator method. I don't see much point in constructing triangle wave generator (a significant circuit in-and-of itself) just as an intermediate step to solve your problem.

The 555 is a great analog chip and does just what you need. I wish people didn't hate on them as much.

Triangle wave. Comparator. Control threshold. That's the basic way to do it.

If you want to control a hobby servo, however, this is not the best way. The duty cycle varies between 5% and 10% (1ms to 2ms pulse width in a 20ms period), which is short, and most likely you want to control it with some precision. On a 5V\$_{PP}\$ triangle you have to vary the comparator's threshold between 4.5V and 4.75V. Any deviation and you won't be able to control the servo over its full range. That requires precision components. Also, the triangle wave generator needs 2 opamps, and then there's the comparator.. There's a better way. 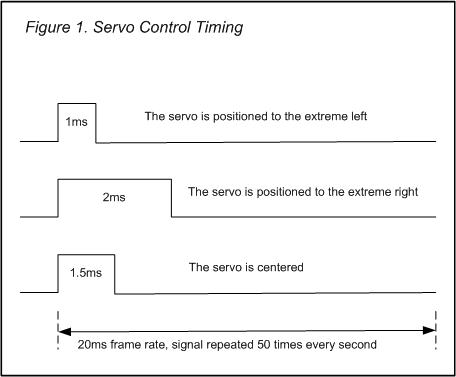 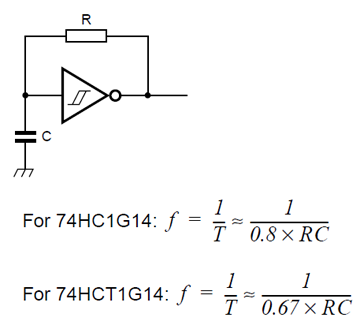 I could have done this with two LM555s, but I'd need more external components.

edit (about microcontrollers)
I agree with Olin (see comments) that excluding a microcontroller is short-sighted (Olin said "silly"). There was a time when developing for a microcontroller was complicated, but today that's no longer true. You can also have a programming interface for a few euros. The solution would then look so easy that no non-controller solution can compete with it: you take an ATTiny5 (Olin takes a PIC10F220) in a SOT23-6. Connect a decoupling capacitor to the power connections and the potmeter to the ADC input. That's it! 3 (three) components. Converting the ADC reading to a pulse width output is so easy that it's almost ridiculous, even for a beginning programmer.

Once you get started with them you'll find that microcontrollers often offer a more simple and more flexible solution than with other ICs or discrete components.

a note
From your other question I see that you do use microcontrollers. Why do you want to avoid them here?

In a lot of cases the PWM didn't need to be super linear, so the triangle wave doesn't have to have perfectly straight edges. Allowing them to be a little exponential can simplify the circuit.

Mark Rages pointed out that when you say "servo motor", you could be referring to the little position-controlled hobby motors used on model planes and the like. My answer applies to controlling a motor assuming you have a analog voltage proportional to how hard you want to drive the motor. It does not apply to these "hobby servos". Those aren't controlled by PWM in the common sense of that term, but by the width of pulses that usually need to be from 1 to 2 ms repeated every 20 to 50 ms or so. If this question is really about hobby servos, then it should be fixed to make that clear.

I recommend using a low-voltage (BiCMOS) power supply control IC like the UCC3803. The operating frequency can easily be set with a simple R and C, and the duty cycle control easily done with a potentiometer. It will operate on a 5V rail.

The UCC3803 is pin-compatible with the UCx84x series of PWM controllers. If you want to do easy PWM, you can use the above schematic, omitting R1, the 2N2222 and the 5k ISENSE adjust pot (just tie pin 3 to ground). You probably can also omit the two 4.7k resistors in series with the error amp adjust pot and go directly to Vref and Gnd, or use an explicit voltage divider if adjustment isn't necessary. (You didn't specify if you need to easily change the duty cycle).

The IC is capable of driving around 1A of current. (If your servomotor has a PWM input, this is a moot point.)

0
What are the main ways to generate a pwm?
2
Electronically adjustable PWM with 555 timer

1
How could I generate a PWM signal from a control voltage
2
How to use IO pins in PIC microcontroller as PWM?
3
What is the difference between MCPWM and LEDC PWM?
8
ATtiny13A - Can't generate software PWM with CTC mode
2
Servo PWM: Why 20 ms period?
0
Generate a fixed number of pulses on the STM32F4 PWM
0
How to generate PWM with duty cycle varying in sinusoidal fashion?