I am designing a PCB with KiCAD where components such as SMD resistors and capacitors are placed before and after DC/DC converters. 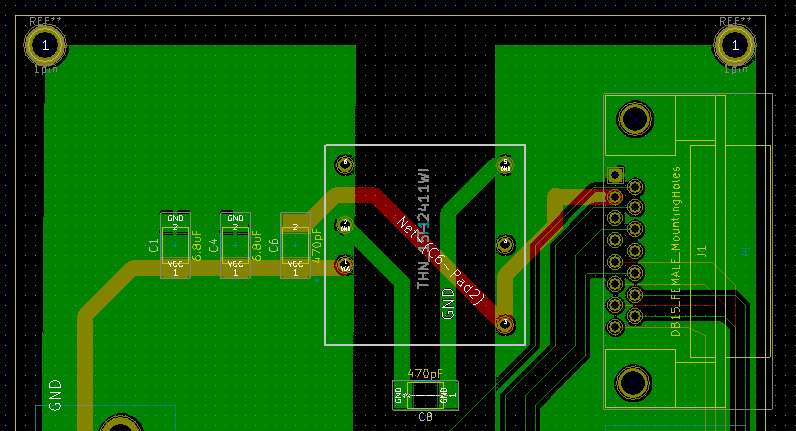 However, I can edit the properties of the component's "ground" pad, select its layer to be B.Cu, and select B.Paste and B.Mask as technical layers.

If I do so, when looking at the 3D design of the PCB, I notice that the copper for the "ground pad" on the top layer (F.Cu) does not exist. Of course, SMD components can only be soldered to one layer, and thus, I need the top layer to have copper for both pads.

The way I have found to solve this is to select both F.Paste and F.Mask as well as B.Paste and B.Mask in the technical layers list for the component's "ground pad". I reckon that this means that I will be able to solder the component on the top layer, and the VCC pad copper will go down just to the first layer (F.Cu), while the GND pad copper will go down to the bottom layer (B.Cu), thus solving my problem. 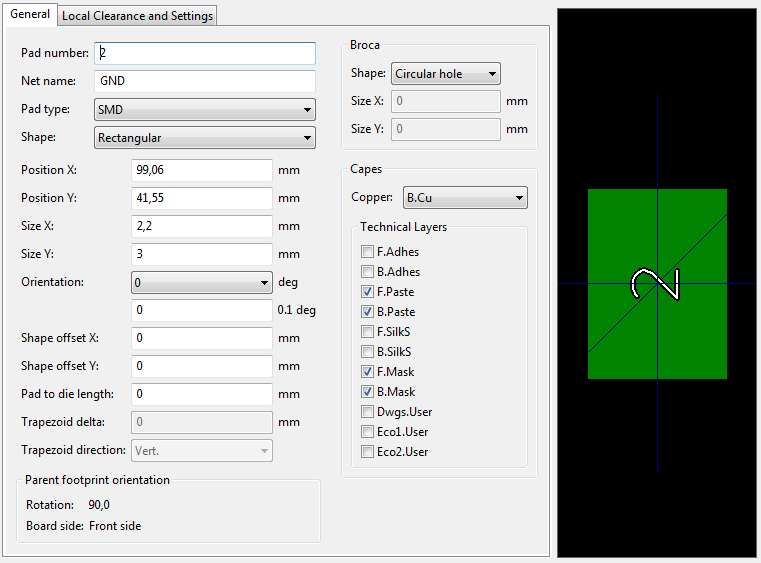 Is this correct? I am solving this implementation issue properly?

It is not correct to play around with the SMT pads like you are trying to do. The component pads, solder masking and paste masking for those SMT device pads all need to be on the same layers. Just because you can edit a pad to be on some other layer does not automatically make it be connected by some magic.

When SMT devices need to connect to other layers the way to do that is with a plated hole via. For traces that are meant to connect GND or PWR plane areas often multiple vias are used to lower the connection resistance and inductance. This can be important because often the vias are the smallest holes on the board and do not represent a lot of layer transition copper. THe holes are often smaller than the thickness of the board itself.

Build your SMD part with pads all on top metal, then use vias to connect on board level layout.

"Of course, SMD components can only be soldered to one layer, and thus, I need the top layer to have copper for both pads."

Yes, that is exactlyl right. One physical SMD component can only be soldered to one layer, either the front (F.Cu) or the back (B.Cu).

So after you place the SMD footprint on the top layer, both "pads" are already on the top metal layer, just as they should be.

"For doing that, I need to place one of the pads of the SMD component in the B.Cu layer (the "ground pad") and the other pad must be placed in the F.Cu layer (the "VCC pad").

The way to get the GND pad of your capacitor connected to stuff on the bottom layer is by adding a trace to make that connection.

Every KiCad tutorial should cover routing a trace. Find one that makes sense to you, perhaps one of:

Not the answer you're looking for? Browse other questions tagged pcb-design surface-mount kicad pcb-layers or ask your own question.

2
Cannot change to front copper layer in KiCAD
2
In a 4-layer PCB, operating at a 8-16 MHz clock speed, should there be any copper pour on the top and bottom signal layers?
1
Minimum PCB Trace width with SMD components and Autorouter problem
7
Best layer stack strategy for a 6 layer PCB with mostly SMD components
2
Is the F.Cu upper layer really on top or just the 'upper layer' but protected?
1
PCB Pads vs Components Footprints in PCB design
1
copper layers of different sizes inside PCB (KiCad)
0
Sizing of different PCB polygons on different layers for high current
0
Soldering the thermal pad of an SMD onto a PCB by heating the bottom with a solder gun
10
Purpose of multiple layer PCB without possibility of blind/buried vias?