How does doubling the voltage amplitude change the decibels?

Suppose I listen to some music on my headphones. Now change the amplitude (in volts, as measured e.g. with an oscilloscope) of the audio signal by a constant factor G.

Assuming that the amplifier in question is linear in the region we are talking about, how does this change the audio signal's power in dB, the loudness in dB(A) and the sound pressure level in dB?

This would also mean the same decibel increase in SPL. However, for "A" weighting you should really take account of the actual SPL level before making comparisons. A quote from wiki says this: -

A-weighting is only really valid for relatively quiet sounds and for pure tones as it is based on the 40-phon Fletcher–Munson curves which represented an early determination of the equal-loudness contour for human hearing.

The reason is due to non-linearities in the ear and is typicfied by the above-mentioned fletcher Munson curve: - 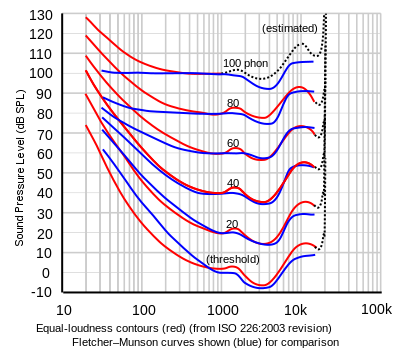 But history has overtaken the FM curves and the equal loudness contours (shown in red above) are a better fit for what the ear does.

So, if your question was more aligned to understanding loudness as perceived by the ear, you must take into account the actual sound level and apply the more appropriate equal loudness curve.

So we often say a doubling of power is 3 dB and if it is doubled twice (i.e. made 4x bigger) it increases by 6 dB. Note that 6 dB is a slight approximation to the real figue i.e.: -

If we assume everything stays linear, not just the amplifier but also the headphones, and your ears, then the formula for a dB change based on voltage ratio G is \$20log_{10}(G)\$

Not the answer you're looking for? Browse other questions tagged amplifier audio decibel or ask your own question.

5
Reducing noise in elementary audio circuit
2
Mic Amp Mixer and Audio Distribution, Won't Work! Help! (Update 2) (Solved!)
2
How to using a 3.5 mm stereo plug mic with a EM11G LM 386N-1 amplifier
1
Why does it take over 4 seconds to eliminate audio popping in this circuit?
13
Does non-matching impedance of amplifier and speaker distort the sound?
0
Getting earphone out from music player
0
Is an LM2596 sufficient as a 9 VDC power source for hi-fi audio applications?