Verilog works in simulation but not FPGA hardware

I have created a shift register circuit and corresponding test bench using verilog. I have run this through ModelSim and get the desired wave outputs so I believe my design is correct. However when I try to load the design onto an FPGA using QuartusII, the circuit does not behave as expected.

Initially, I connected the FPGA to LEDs and switches on a breadboard to test it but it behaved erratically. I thought maybe it was a problem with the switches bouncing so I then connected the FPGA inputs to an Arduino and drove the logic through that but I still get incorrect results.

The shift register code is as follows:

I am using the following Arduino code to test it:

My intention is for this code to initially clear all bits in the shift register and then to set every other bit so that my LEDs should alternate between on and off. The LEDs should not change until the latch is toggled at the end.

However the behaviour I am seeing is that the LEDs are set as follows: 11011011 with a carry of 1. Also the LEDs show every change made instead of waiting for the latch signal.

I have tried adjusting the DELAY constant anywhere between 1 and 1000 but the result is always the same.

I am very new to FPGAs and Quartus and have probably made some obvious mistake somewhere but I cannot see it.

I have triple checked all my pin assignments without success.

The FPGA I am using is a Altera Cyclone IV EP4CE6E22C8N

It is mounted on a development board like this one: ALTERA Cyclone IV 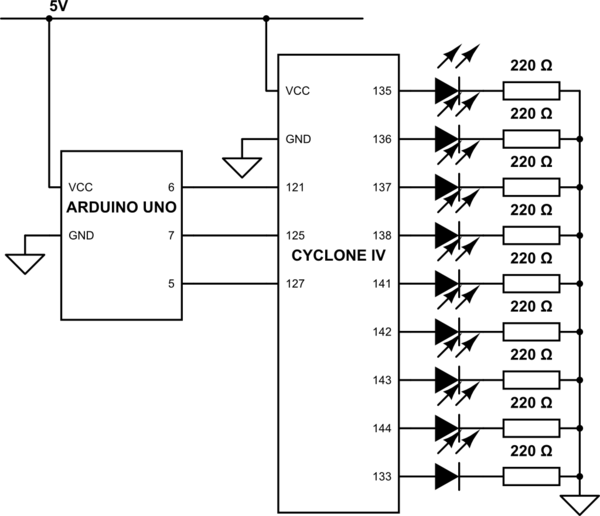 Here is the bdf from Quartus:

It appears that you connected the 5V I/O of the Arduino Uno directly to the 3.3V I/O of the FPGA. That's probably the primary source of your problems.

Here's hoping that you haven't actually damaged the FPGA with the overvoltage. At least the current is somewhat limited by the microcontroller.

Are ringing and crosstalk related to the current/slew settings in the pin planner in Quartus?

No, that would only apply to outputs from the FPGA. The signals from the Arduino are inputs.

Not the answer you're looking for? Browse other questions tagged fpga verilog or ask your own question.

3
Unexpected Verilog warning re FPGA clock assignment
2
Is the theory of operation behind my FPGA design acceptable?
1
Having trouble implementing a 1Hz blinking light on a Spartan 6 FPGA
0
Erratic behaviour in FPGA based I2s loopback (Verilog + Spartan6)
1
Fairly Simple VHDL SPI bus working in simulation but not on FPGA (Lattice MACHOX3LF-6900C FPGA and Lattice Diamond software)
3
FPGA - Is it possible to change the pin direction/type during runtime?
2
Vertical ghosting on 64x32 1/16 RGB LED matrix panel
3
Vivado : constraints setup for SPI interface with common clock
0
FPGA counter works in simlation, not in hardware