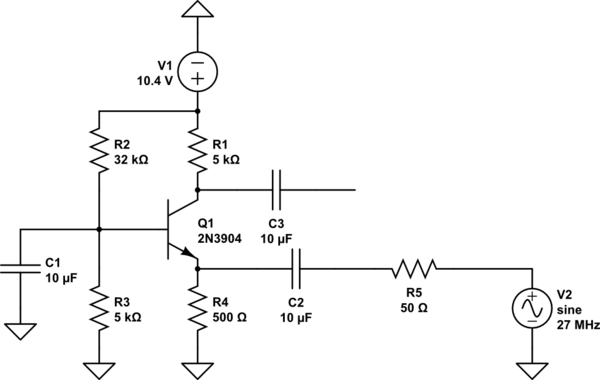 Here's a little schematic I built for my 27MHz colpitts oscillator, which outputs approximately 120mVpp. Since the common base is less dependent on frequency, is less prone to distortion and has high gain I chose it over the CE amp. I used several different transistors in the place of 2n3904. Even some soviet ones with GBP pf 800-1000 MHz. I simulated the schematic in LTSpice and got this result.

The output is 2.4Vpp, so the gain is 20. And here's the first confusing part: So far I've learnt that the gain of CB amp is

Ie, in the DC state, according to the same simulation is about 1.44mA, so re should be about 17 ohms. The gain in that case should be about 300. I am not expecting this kind of gain in reality however it is a huge jump from 20 to 300. I do suspect that on high frequencies there is some effect that I am not aware of. The CB configuration should basically eliminate the Miller effect, and I don't know what else might cause the drop in gain.

Anyways it's not where the problem ends. After building the amp on the desk the gain was even smaller than expected 20. The output Vpp was around 300 mV, a bit more than 2 times larger than the input (every transistor behaved like that, even high GBP ones). I should also note that the same high GBP transistors performed much better when used in CE configuration (around 2Vpp), although with quite a bit of distortion, which was why I decided to use CB.

I disconnected the signal source to check if the DC biasing etc was done correctly, and the voltages on each node were around the same as in the simulation.

I decided to make a frequency domain analysis in spice and here's what I got:

This is with the 2N3904. I suppose that transistors with higher GBP will have different curve (although not sure about that). Anyways the gradual roll-off is very visible.

Since I used the transistors in CE configuration effectively I highly doubt that the transistor is the problem here. I suppose the problem lies within the schematic itself, although I fail to find it. The question is: why does the schematic behave like it does in real life? Also how can one fight the gradual roll-off if it is possible at all?

After reading the suggestions, reduced the effect of low pass filters by reducing the resistor values, which also increased emitter current. Ended up using this circuit, which gave a gain of about 5. It's probably very suboptimal but, it worked better than the last one. The output was about 700 mVpp with input of 120 mVpp.

The voltage gain of your circuit is around:

at the middle frequency.

Also from the data-sheet we can read that Cbc capacitance is around 4pF.

So Rc together with Cbc will form the low pass filter.

And the cut-off frequency is around:

Hence the gain at the 28MHz is

Also do not forget about the input Cbe capacitance is:

If the RF source is connected by a long coax, then it gets a little bit more subtle. The RF source would have 50R output impedance, and we must terminate the cable on the transistor's side by adding a (50-17)=33R resistor. So the gain would be different, yet again.

Also we have not taken into account the imperfections of this transistor. Its datasheet fT is around 300 MHz... at 10mA, with a rather high Vce, and without a collector load.

At 1.4mA, and with the very low Vce used here, the figure will be different, the transistor will be slower. Its hFe will be quite low, and it will require a non-negligible base current.

Also, the collector-to-base capacitance is multiplied by Miller effect, which increases base current.

You have connected the base to a perfect simulated capacitor, which has negligible impedance at 27MHz. However, the transistor has an internal base resistance, which combined to base current, reduces your gain.

Also, the real capacitor you used in implementing the circuit will not be perfect. It will have ESL and ESR...

...and the output impedance of your amp is 5k which is very inconvenient at 27MHz, anything you connect there will have capacitance and suck all of the signal. This is why you need an emitter follower or buffer on the output.

Also here's a primer on capacitors at HF:

The inductance of the cap is the same as a piece of wire having the shape of the path taken by the current. Thus, a through-hole capacitor with e=5.08mm between the pins, with the internal foils sitting 2mm above the board, can be modeled as a 5mmx2mm square loop if we close the circuit with a trace on the board below. This loop has an inductance of 9nH.

If the cap has low ESR then you get a LC tank circuit which may resonate, and since it drives the base of your BJT, you just built a Colpitts. It is very easy to unintentionally build an oscillator when combining devices with gain (ie, transistors) and layout parasitics... A transistor whose base is driven by a reactive impedance, without enough real (resistive) impedance in series may create some headaches...

This does not depend on capacitor type, chemistry, etc, only its mechanical construction (you will no doubt guess that axial caps are much worse than radials).

A leaded ceramic will have the same HF behavior as a modern good quality leaded electrolytic. Same inductance.

Basically, if you want a low-inductance capacitor, it needs to be low-profile, and lay flat against your ground plane to reduce the loop area. And therefore...

This means MLCC (ceramic) of X7R type for bypassing, or C0G type if you need an accurate value. Or SMD Film caps.

Then you add the inductance of the whole loop, traces, vias, ground plane etc.

So when you see audiophiles adding bypass caps... 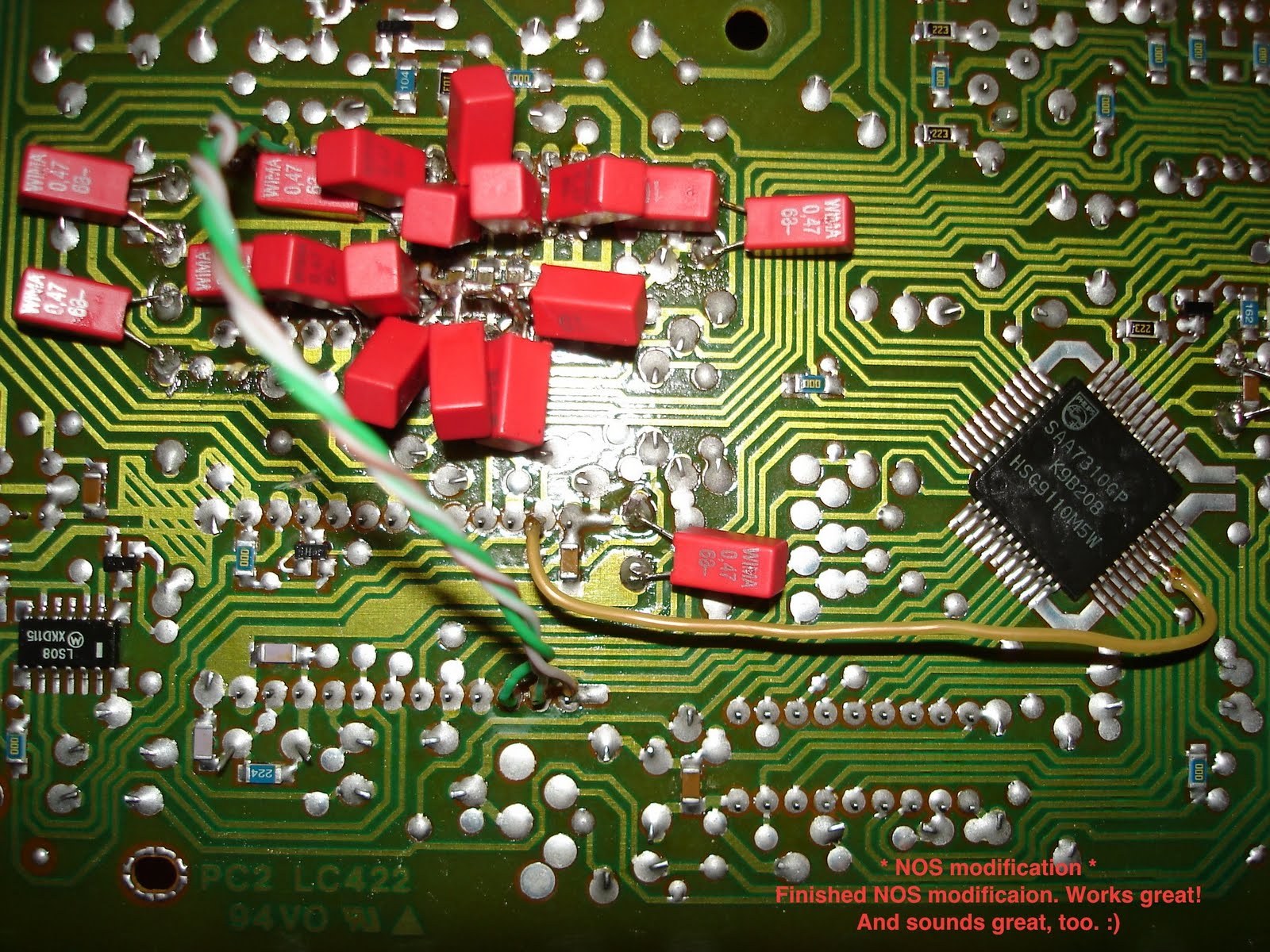 I've looked at your circuit. I'm not a formula guy. You should realize that almost all of the emitter current will have been coming from the collector. That's the idea of a transistor.

So when the input pulls your emitter down by some small voltage (we're doing small signal analysis here!) the current will move away from the steady state current by dI = dUin/Re. Now, apply that same current in the collector circuit and your output voltage swing will be dUout = Rc * dI = Rc * dUin/Re -> dUout/dUin = A = Rc / Re ! Neat! Same formula as you got!

Not the answer you're looking for? Browse other questions tagged amplifier rf common-base or ask your own question.