Sorry (as in the previous post I said it would be the last component question).

However, this one I also cannot find:

They both look very similar:

I had to put them on some other components to fix them into place for making a better picture.

Initially I thought these are transistors (since they have 2 legs and look like them), but they are not (I think).

I'm almost sure these come from a computer VGA card (old one). 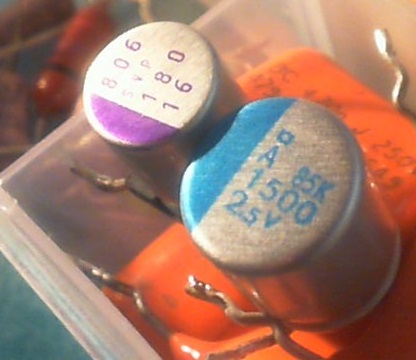 Spehro spotted the OSCON SVP, the other one has: 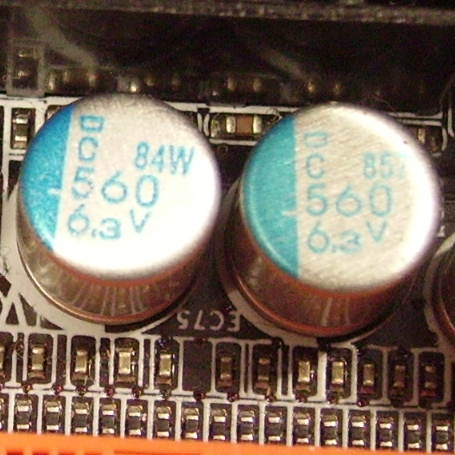 "85K" is not a temperature, rather a serial/lot number.

Now, since you say you are a beginner:

If you want to reuse these caps, mind the fact that the ESR will be extremely low, most likely below 0.010 Ohms, so if you use them at the output of a voltage regulator or LDO you need to check its datasheet to be sure the regulator/LDO will be stable with such a low ESR capacitor. LM317 dislikes low ESR caps, for example it can be unstable or oscillate.

Also polymer caps often have very high leakage currents (like 1mA) so not for use in low-power circuits.

Electrolytic capacitors. 180uF/16V and 1500uF/2.5V. They are the polarized type. The stripe on the top indicates the cathode (negative) lead.

The SVP is possibly Panasonic organic polymer type (low impedance and a bit expensive), though the case size marking does not appear to match, so it may be a low-cost clone of unknown characteristics.

Edit: Check out @peufeu for the other cap information (+1)