I wanted to know whether connecting two or more simple diac-triac ac lamp dimmers in parallel with the same load cause any problems? I do not want to connect them in series, just parallel will be enough.

The dimmer circuit is the common diac-triac dimmers found in stores and wired in paralled like this .

Note that the first one to switch on will control the brightness. i.e., The one with the brightest setting will win. This is due to the way the triacs in the dimmers switch on at a certain point in the mains cycle.

Figure 1. Triac dimmer control. Note that the earlier in the mains cycle that the power is switched on the brighter the lamps.

I do not have a problem if the brightest one wins. I just want to know whether they will create a short or explode or destroy the load.

No, there will not be a short. The first one to switch on will drop the voltage across the other dimmers close to zero and the C1 on each of those will not charge any further and those triacs will not turn on.

The question changed somewhat after I wrote the answer in that OP can accept a "one triac" solution.

Figure 2 shows how to wire the dimmer for three-point relay control. The 4k7 resistor can be omitted provided the other resistors are greater than 4k7. I have laid the circuit out with the triac on the live wire as would normally be the case in a fixed installation. It will work either way.

There are multiple ways to tackle the problem of providing 3 pre-set light levels. 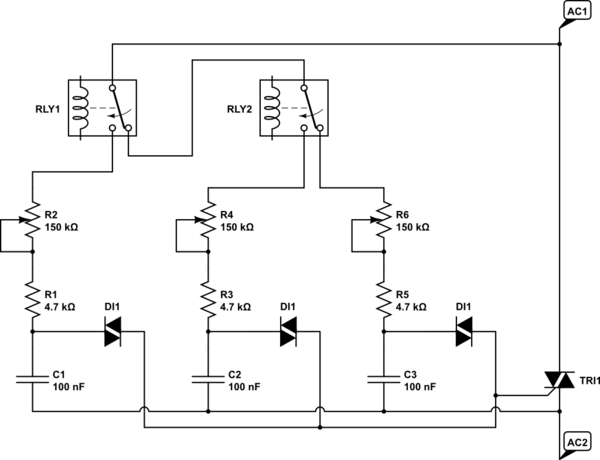 Or even simpler still.... 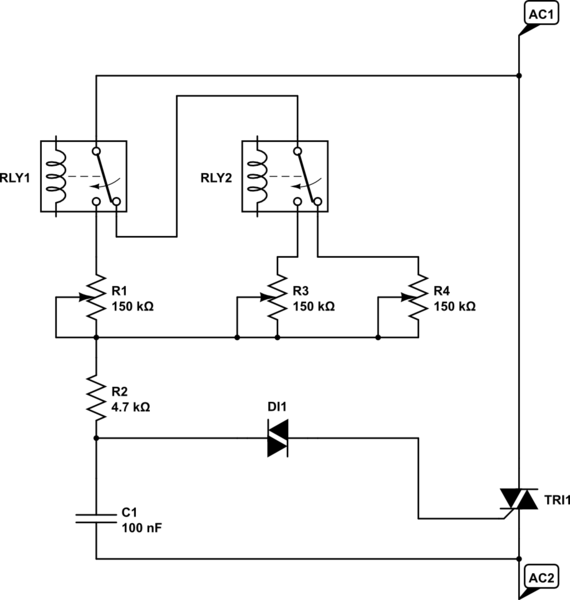 You could fairly easily modify a single dimmer to satisfy either of the schemes above.

Note: The schematic you show is not the most reliable (the trigger point), and typically two R/C networks are used to provide much better reliability.
You should also include a snubber to prevent radiated noise.

Not the answer you're looking for? Browse other questions tagged ac triac dimmer lamp diac or ask your own question.