How can I measure low power energy usage of bluetooth device?

I need to measure the energy usage of a small bluetooth device which is normally operated by a coin cell 3v battery.

Background: Using an oscilloscope I was able to get fairly good pictures of the energy used during standard connection and advertising events (measuring current through and external 10ohm resistor and integrating), but that is in a steady state condition when not much is going on and the event is easily captured with oscilloscope. More complex interactions happen between the device and the other bluetooth device it is connected to (typically a smart phone) during re-connection events and when characteristics are being read or written.

Questions: Is it possible to use a simple capacitor to measure energy usage by charging the capacitor initially, then running the device off the capacitor power for a few minutes during the test and then measuring the remaining charge? How accurate would that be?

What other techniques would you recommend?

(edit: note I'm actually interested in mAH usage not energy since ultimately the goal is to estimate battery life and battery is rated for 220mAH)

The capacitor has the drawback that its voltage is not constant.

You can also use a capacitor as power source for the LDO. Using a LDO means you can let the voltage on the cap drop a lot more (like 5.5V down to 2V), than if you were powering the device directly (like 3V to 2V).

But you need a rather accurate electrolytic cap. Well, you can always calibrate it with a known resistor as a load...

You can also use an IV converter: 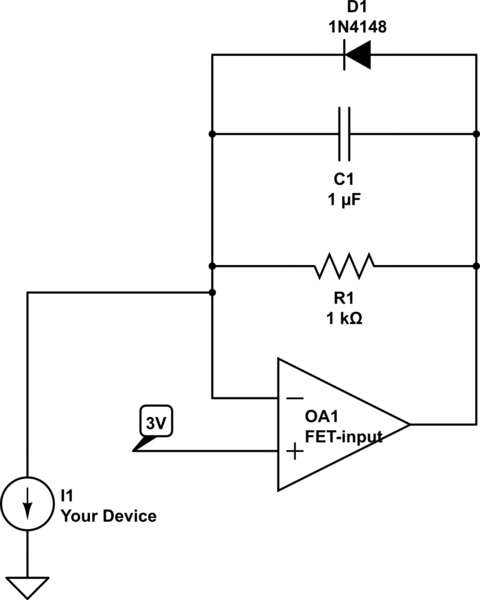 The opamp replaces the LDO and will make sure your device is powered by a constant 3V, while giving a current reading on the 1k resistor. The cap keeps the opamp stable. The diode should be enough diodes in series to allow the opamp to supply the device directly, bypassing the resistor, if needed. It is optional.

If your device has onboard caps, you'll need to add a resistor in series because the opamp won't like the capacitive load.

What you want to do is integrating the current consumption over time to get the average value.
Your device might most likely be in advertising (or connected) mode only.
The biggest issue is the dynamic behavior of the current profile: While most of the time the bluetooth chip will be in low-power mode (no Tx/Rx) its current consumption will be in the range of (very few) micro-amps, but (every now and then) it will wakeup for just a few milli-seconds for processing the ADV/CON packets that have peak consumption up to tens of milli-amps.
The amount of charge (or average current) from the low-power mode might be in the same range (or even higher) than that of the pulsed packets.
So, a single measurement with a single measurement range will give totally wrong results: if the measurement range covers the peak pulse current, there'll be so much noise and offset error in the low-power phases; but if the measurement range is good for the low-power phases the pulse currents will be clipped (ignored).
SMUs might sound great for such a job, as they can record current profiles; but they won't switch the measurement range fast enough.
If you have something to recorded two analog channels with sufficient speed and memory (>=100, better 1000 kSps, for the timeframe required - e.g. oscilloscope with deep memory), I'd propose to use two current shunts (with instrumentation amplifier, e.g. AD8422) in series, one for the small currents (e.g. 20µA range - with a bypass diode in parallel to limit voltage drop) and one for the packet pulses (e.g. 20mA range), capture the two current signals, and calculate together, based on a simple rule (use the low range when not out-of-range , otherwise use the high-range).
The idea with the capacitor discharge is also not bad, but you must consider its internal leakage - and (esp. for ceramic caps) there's voltage-bias effect reducing capacitance, so do not judge from delta-voltage, but from the required recharging back to the initial capacitor voltage level.

Not the answer you're looking for? Browse other questions tagged energy bluetooth-low-energy or ask your own question.