I tried to make a simple latch with a PNP transistor and a MOSFET. The idea is that initially it is off, when you press the button it turns on and stays on.

But it doesn't stay on. 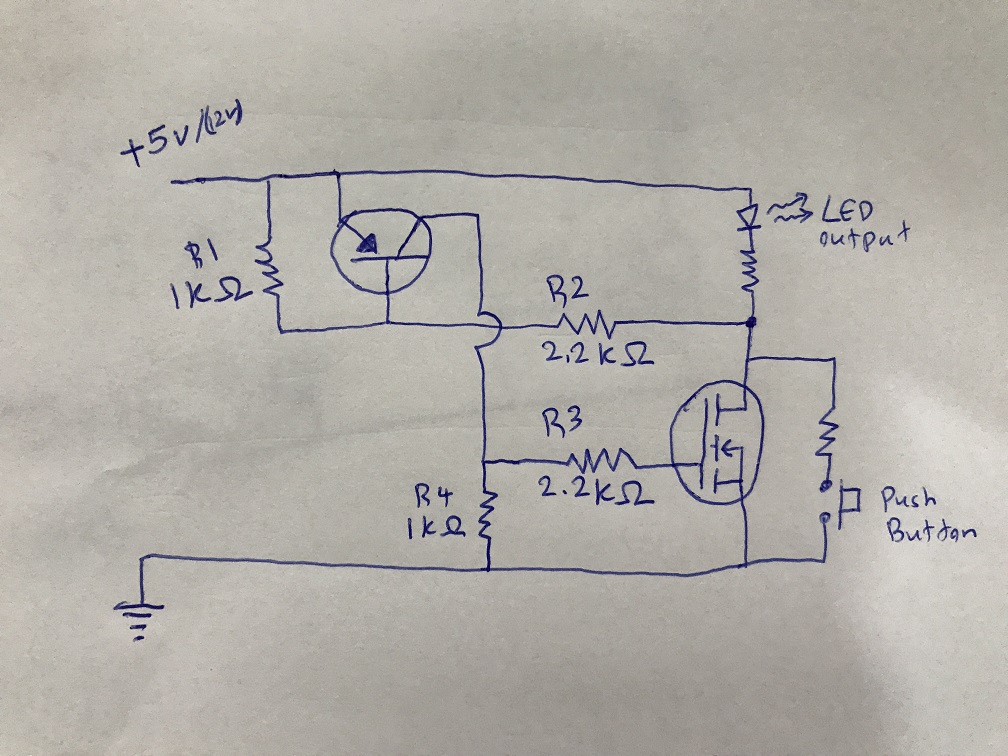 I also tried increasing the pullup and pulldown resistors R1 and R4 to 4.7K, in which case the LED is initially on. (Not sure why!)

I attached a picture of the actual implementation, I don't know how much you can make out from it but here it is: 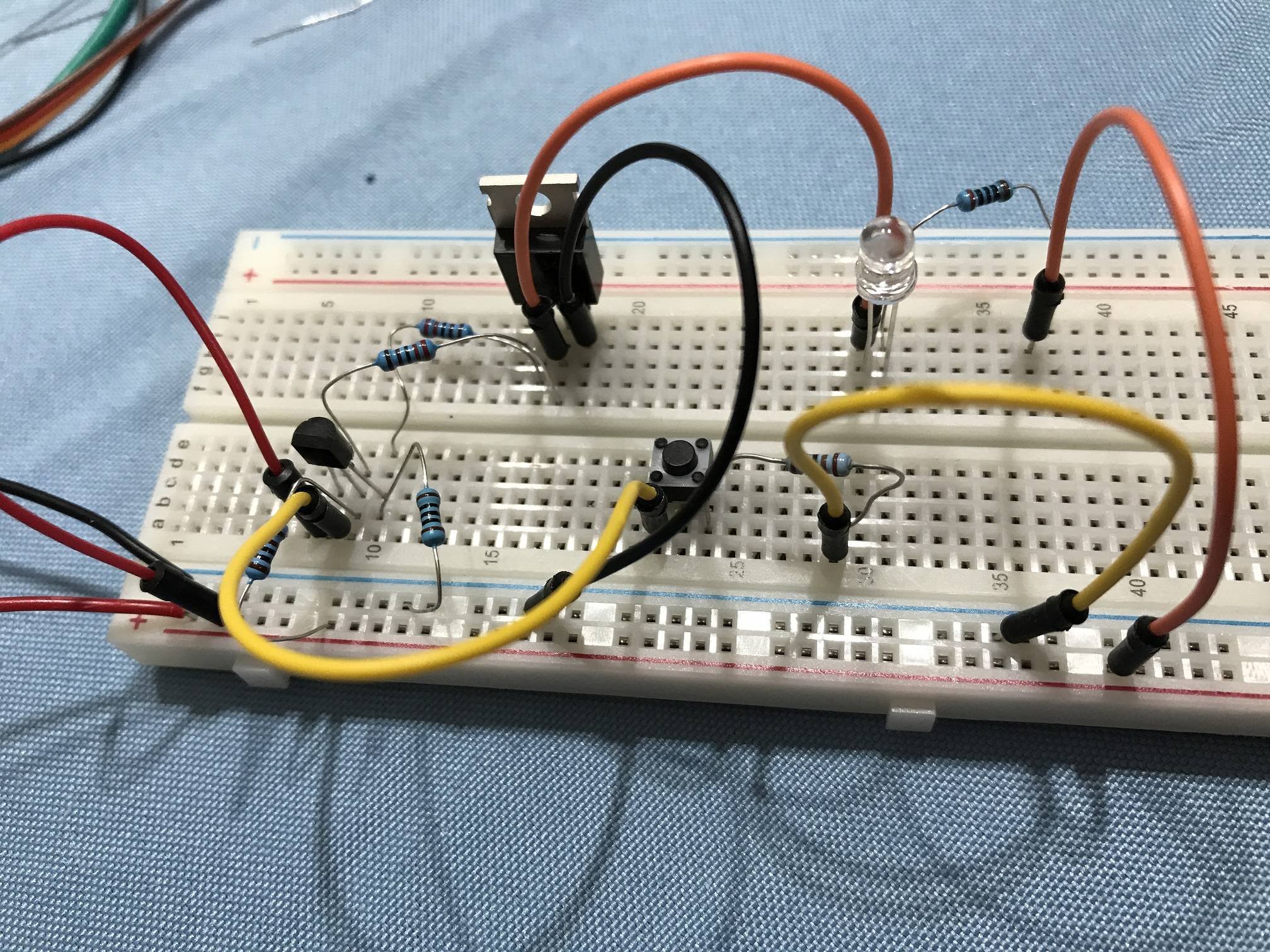 You could put a cap to ground at/near your mosfet gate. Perhaps across \$R_4\$ in your circuit.

Try this as an option: 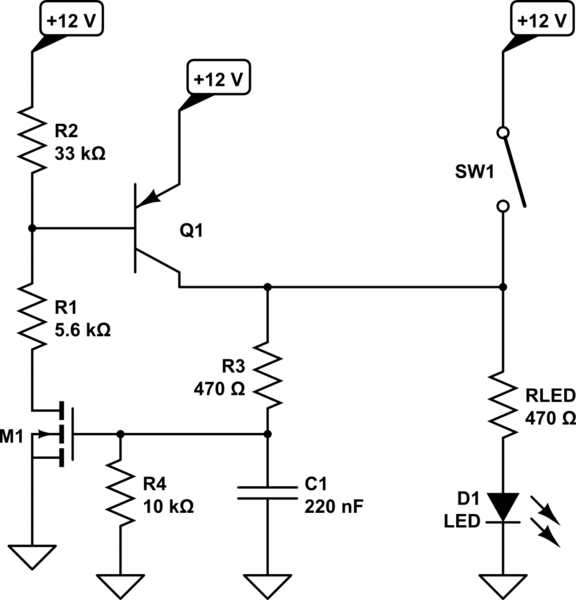 \$R_3\$ limits sudden currents to \$C_1\$ and the gate of \$M_1\$ and oscillations, but still also allows \$C_1\$ to discharge pretty fast through the LED load when the power is removed. \$R_4\$ is needed to keep trace currents from charging the mosfet gate and to also further discharge \$C_1\$ when the LED isn't conducting much anymore.

The above circuit is set up for an LED current of about \$20\:\textrm{mA}\$ as an example. If you plan some monster LED later on, the values and part selections would need to be changed.

I'd much have preferred the use of another BJT rather than a mosfet. In that case, the following circuit is an easy derivative, robust, and doesn't need \$C_1\$: 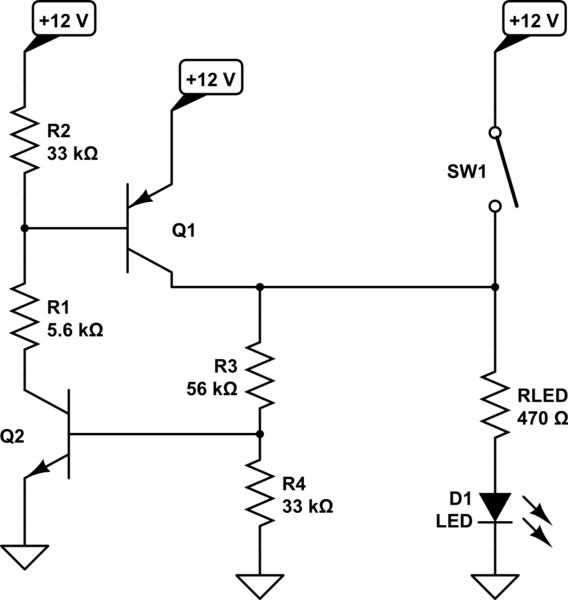 You could also get rid of one (or perhaps even both) of the two \$33\:\textrm{k}\Omega\$ resistors and further simplify it. The LED load is plenty, already, so I don't see much real need for \$R_4\$. And given that, the whole thing should power up in the right state also without the need for \$R_2\$. But this applies so long as there is a load. Otherwise, I'd keep at least one of them.

Not the answer you're looking for? Browse other questions tagged transistors mosfet latch or ask your own question.